It has been an ongoing disinformation war, according to this think-tank study, and Democrats have sided with the fascist right. I'm throwing in with Acorn to the bitter end. 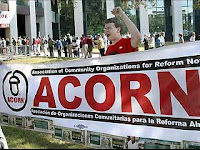 Summary: Our analysis of the narrative framing of the ACORN stories demonstrates that -- despite long-standing charges from conservatives that the news media are determinedly liberal and ignore conservative ideas -- the news media agenda is easily permeated by a persistent media campaign, even when there is little or no truth to the story. 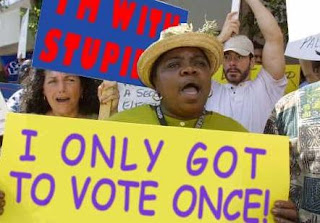 ACORN, a community-based advocacy group for low- and moderate-income families, has been in the news in recent weeks thanks to an undercover video in which two employees in the organization's Baltimore office appear to offer unethical advice on home loans, tax evasion and disguising identities of underaged sex workers to two conservative activists posing as a pimp and prostitute. The organization has fired the workers and hired a former Massachusetts attorney general to conduct an internal review. It's also suing the filmmakers for illegal taping under Maryland law.

The media scrutiny of the 500,000-member group continues today, with reports that a leading Senate Republican, Charles Grassley of Iowa, has called on the Internal Revenue Service to look at how ACORN has transferred charitable and government funds meant for the poor to political and profit-making arms of the group. Those transactions occurred before a change in the group's leadership last year.

This is not the first time ACORN has found itself in the media spotlight: The organization first became a high-profile story during last year's presidential campaign when Republican candidates and other conservatives attacked the group and tried to link it to Barack Obama, with GOP presidential candidate John McCain charging hyperbollically in an October debate that the group was "maybe destroying the fabric of democracy."

Titled "Manipulating the Public Agenda: Why ACORN Was in the News, and What the News Got Wrong," the independent study of coverage by 15 major news organizations was authored by Peter Dreier, a professor of politics at Occidental College in Los Angeles, and Christopher Martin, a journalism professor at the University of Northern Iowa in Cedar Falls.

They trace the latest uproar over ACORN to the White House firing of David Iglesias, the U.S. Attorney in New Mexico, for failing to help GOP election prospects by prosecuting alleged instances of voter fraud by the group. At the time ACORN was involved in a major voter-registration drive in the state.

...[B]ut none of them -- including the Chicago Tribune, Los Angeles Times, New York Daily News, New York Times, Washington Post, and Wall Street Journal -- mention that Rove was specifically focused on attacking ACORN for its voter registration efforts in New Mexico and other states, even though ACORN is mentioned frequently as a Republican target in the investigative documents.

The study points out that while ACORN has long been involved in efforts to improve housing, wages, access to credit and public education, the focus of most news stories about ACORN -- what the authors call the "story frame" -- was voter fraud:

The "voter fraud" frame appeared in 55% of the 647 news stories about the community organization in 15 mainstream news organizations during 2007 and 2008.

But at the same time, many media outlets failed to distinguish allegations of voter registration problems from actual voting irregularities, and between allegations of wrongdoing and actual wrongdoing.

Interestingly, the study found that local newspapers were more likely to verify facts with county election boards and thus were less susceptible to the politicized "voter fraud" frame than national news outlets.