Mob Figure Is Sentenced to Life for Four Killings 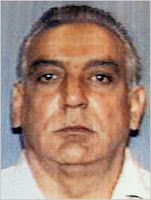 A reputed soldier for the Gambino crime family was sentenced on Thursday to life in prison for his role in the killings of four people in New York. But it was a fifth killing, which resulted in a hung jury, that drew the biggest crowd.

Though Charles Carneglia, above, was convicted of four killings, a jury could not reach a verdict in the shooting of Albert Gelb, below, in 1976.

Squeezing into benches alongside some of the victims’ family members, more than 40 uniformed court officers filed into federal court in Brooklyn, seeking closure to the fatal shooting in 1976 of Albert Gelb, a highly decorated court officer. Officer Gelb, 27, was killed in his car four days before he was scheduled to testify in a gun case against the mob figure, Charles Carneglia, 63. ...

More
Posted by Alex Constantine at 10:05 AM