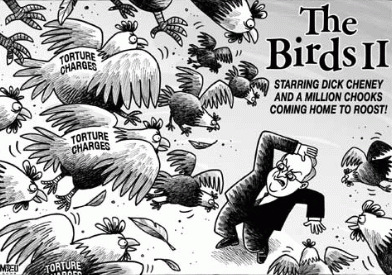 ... The question that gets lost is what it means to say that torture works. You can’t judge the tool unless you know the task: a hammer works fine, but not if you’re trying to sew on a button.

Let’s look at a moment when Afghan forces had a problem, and turned to torture to handle it. Someone had thrown a grenade at a U.S. convoy, wounding two Americans, and the Afghans were under pressure to come up with a perpetrator. They grabbed an illiterate boy named Mohammed Jawad who didn’t even know his own age—as young as twelve, no older than sixteen or seventeen—and beat him and threatened to kill his family unless he confessed. They got what they wanted. (This involved a written statement in a language that Jawad didn’t even speak, but never mind.) Then they handed him over to grateful Americans. Problem solved—for the Afghans, torture “worked.” As for the boy, he was shipped to Guantánamo. He spent more than six years there, and was subjected to a sleep-deprivation regime known as the frequent-flyer program. That form of torture, if its goal was to get any useful information, did not “work.” How could it? (Jawad was finally sent home last week, after a federal judge got a look at the case, or rather, lack of a case, against him, and called it “an outrage.”) Then again, if the torture was just meant to break the boy’s spirit, it may indeed have worked. But that accomplishment has very little to do with what one might call truth, justice, and the American way.

And that’s the point: torture is not about the truth. Thinking about history, it seems, more often than not, that torture’s aim is untruth, as in repressive societies, where it is used to elicit false confessions or recantations, or simply to keep people from talking freely about and to their governments—to prevent them from telling the truth, or being true to themselves. Torture has “succeeded” in getting people to admit that the devil himself induced them to sign their names in a book of witches. More recently, look at what protesters in Iran were forced to say. Under torture, the guilty and the innocent alike will confess. And what good is that? Torture can “work” in getting people to say what you want them to say if—and this is an important if—both sides in the transaction know what words are demanded. The torturer is interested in what confirms his beliefs, not what upends them. If a suspect, in the early stages of torture, says he knows nothing, the torturer’s response is not to stop but to press on, until the torture “works”—until, perhaps just by picking up cues, the prisoner figures out what he or she is supposed to say to make it stop. If K.S.M. did throw some real information in with the junk he gave us then that only proves the adage that even a broken clock is right twice a day. Torture is a broken tool—morally twisted and inherently unreliable. And un-American.

Cheney, in an ode to torture that he delivered yesterday on Fox News, talked about “defending the nation.” By that light, torture most certainly did not work. Torture has served as a recruiting tool for Al Qaeda and has left us divided. It is an attack on, not a defense of, our system of government. It is bizarre that Cheney keeps talking about how investigations will keep C.I.A. agents from doing their jobs. How about the man-hours that were wasted keeping a hapless Afghan teenager from sleeping?

The other question raised by the Post article is why K.S.M. was standing in a lecture hall in front of C.I.A. agents instead of in a dock before a jury of ordinary Americans. He was captured six and a half years ago. When is he going to be convicted and sentenced for the murders he masterminded? The C.I.A. can always chat him up in Florence or Leavenworth if it needs to. If the reason for the delay has anything to do with the conditions of his interrogation (fears of tainted evidence, for example, or of embarrassment), then torture, conceived as a way to bring Al Qaeda to justice, most certainly did not work. It was nothing but a betrayal of the victims of September 11th. ...