Book Review - Free Lunch: How the Wealthiest Americans Enrich themselves at Government Expense (and Stick You with the Bill)

" ... Our national myth that we heavily tax the wealthiest people to subsidize the people down below is false. Government data show that these subsidies go to the top. ... On his last dollar of income, Warren Buffett pays 15 percent tax, the average American pays 30 percent, the average schoolteacher pays 40 percent. ... " 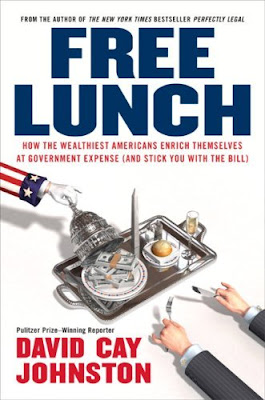 Editor's note: David Cay Johnston was 19 years old when he talked his way into a job as a reporter at the San Jose Mercury News. When he left five years later, he was still the youngest reporter at the newspaper. The Pulitzer-Prize-winning journalist has worked for the Los Angeles Times, the Philadelphia Inquirer and The New York Times. At the Times, Johnston specialized in investigative reports on taxation. He retired from the Times to focus on writing books. Johnston, who lives in Rochester, N.Y., has written two: Perfectly Legal: The Covert Campaign to Rig Our Tax System to Benefit the Super Rich – and Cheat Everybody Else and Free Lunch: How the Wealthiest Americans Enrich themselves at Government Expense (and Stick You with the Bill).

Johnston on the media and the government

Journalists do a very good job of covering what politicians say. I've always focused on what the government does. I wanted to examine how the tax system operates and what happens when laws are passed. And, what I discovered, to my surprise was two things: 1. What politicians say about the tax system and how it really works are only accidentally and occasionally related, and 2. Our national myth that we heavily tax the wealthiest people to subsidize the people down below is false. Government data show that these subsidies go to the top.

The government publishes very detailed numbers on how much it gives to poor people, say poor people who are blind. But there's no compilation of all the gifts and subsidies to the top and what I show in "Free Lunch," my latest book, is that there are companies and entire industries that derive 100 percent of their profits and more from hidden taxpayer subsidies.

You know all the layoffs going on in America, all the job cuts? The number of lobbyists in Washington has doubled from 2000-2006 to more than 35,000. Just in Washington, in just six years. The state governments give away to companies more money than they collect in corporate income taxes. Locally owned businesses are systematically being destroyed. They pay taxes, while the national operators are taking over because they receive taxes.

For every dollar of profit Cabela's earned in its first three years as a public company, they made deals for at least $1.37 in subsidies. Cabela's is not really in the competitive market; they are in the business of reeling in tax dollars. And yet, during the 2004 campaign, President Bush and Vice President Cheney each went to at least two stores. The campaign cited Cabela's as a model of entrepreneurial spirit. That's absolute nonsense. ...

Johnston on the U.S. economy

You know in 2007 last year, all of the income taxes withheld from your paycheck in January, February, March, April and part of May equaled the interest on the national debt. Remember when Ronald Reagan promised us balanced budgets in the 1980s? When he persuaded us to pay more in Social Security so that that money could be set aside for the Boomers? Well, Washington went and spent all that money.

This is what I call the Jane Austen economy. You know in "Pride and Prejudice" when Mrs. Bennet says "Mr. Darcy has 10,000." What is she saying? Well, Mr. Darcy's family has a fortune probably in the slave trade, and they loan that money to the crown which pays 10,000 pounds in interest. And how does the crown get the 10,000 pounds to pay the interest? It taxes the poor and middle class.

Our national myth in America is upside down. On his last dollar of income, Warren Buffett pays 15 percent tax, the average American pays 30 percent, the average schoolteacher pays 40 percent.

What we've got is a giant system to enrich the rich. Not everybody. But there are segments that are mining Washington for all they can get and the news media are totally and completely in the dark because overwhelmingly they quote what politicians say, not report what they do.

I was absolutely flabbergasted to discover this, I believed the whole national myth, you know … that we tax the rich to help subsidize people down below, and to discover that this just isn't so, I mean most of my career has been discovering (that).

I left the LA Times to go to the Philadelphai Enquirer to write a book about how Atlantic City casinos, the most highly regulated business in the world supposedly, showed the government could clean up a corrupt a regime. I named 12- and 13-year-old children who were given liquor and sweets because they had money to gamble with, and I showed how the Medellin drug cartel laundered money. I showed how Donald Trump gave out a brochure that if anybody followed it they were being cheated at the tables. The government didn't clean it up, the government just replaced the Mob and its protection racket with government.

Johnston on the fallout from the bailout

We have and we will have more inflation. Right now inflation is running at 5 percent. We're going to have a big round of inflation. You cannot inject all this money into the economy without inflation. And the government is so deeply in debt it wants to do what's called monetizing the debt, that is it wants to borrow a billion dollars and pay back in inflated dollars a half-billion dollars. That's one thing that will happen.

The banks have gone on strike; they won't lend money. I actually have people calling me saying I was supposed to close my mortgage yesterday the bank said they found a reason not to close on my mortgage and this is someone with good credit. I've talked to two businessmen who have been warned by their bank that their credit lines may be cut back from banks they've done business with for years.

We will probably see a big round of defaults on credit card debt. That's why the bank stocks are so low. Everybody recognizes that people might not be able to pay this back.

Listen, there always will be business cycles. There will be ups and downs. But this is a government-induced problem. If you just eat cotton candy all the time, you're teeth are going to rot, your bowels will quit working and you'll die at a young age. Regulation is spinach and fiber, and like your mother told you, you need to eat your spinach. That doesn't mean all regulation is good, but you can't have no regulation.

The other thing that's going to happen is, there are going to be a lot of companies shedding jobs left and right. What we don't know is how bad it will get, but we're going to have more unemployment and a huge drop in tax revenues.

In New York State, you know you hear all the time that the top 1 percent are paying almost 40 percent of income taxes. We are depending on an incredibly narrow base for too much of our revenue and it's inherently unstable.

When you look at all taxes, the middle class is more heavily taxed than the richest people in America. When I put together the numbers together three years ago proving this, the administration declared the numbers reasonable. People who make over $10 million a year pay a smaller federal tax burden than people who make $100,000-$200,000 and they pay the same as people who make $50,000-$75,000.

The deeper problem in all this is we've lost sight of the moral principle that gave us democracy 2,500 years ago. You can not become wealthy without a civilization. The Athenians, when they recognized that, came up with this moral principle: The greater your gain from living in a civilization, the greater your moral duty to maintain that civilization. We've perverted that, we've lost sight of that. I argue this is the most conservative principle of Western civilization because we still had in the Old Testament at that point multiple wives and concubines. So it's older than that marriage is between one man and one woman nonsense. And who is leading the charge to destroy this principle? People who call themselves conservatives, but who are really uninformed reactionaries.