" ... Joe Biden wanted Hunter Biden to find a different line of work because he couldn't afford to run for president as father of a lobbyist. ... " 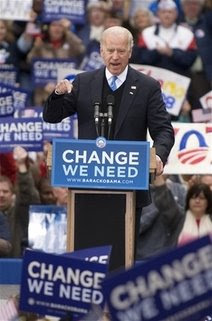 The L.A. Times just popped a big story the Obama-Biden folks don't want to be reading the night the Delaware senator introduces himself to the nation: a potential conflict of interest involving Biden and one of the nation's biggest asbestos litigation law firms — which also happens to be his top contributor.

The report seems to provide fuel to Obama supporters enraged Illinois senator picked a running mate with such deep ties to the D.C. cash-politics-lobbying world.

"When Joe Biden’s brother and son wanted to buy a hedge fund company two years ago, they turned for financing to a law firm that had lobbied the Delaware senator’s office on an important piece of business in Congress — and in fact had just benefited from his vote.

The firm promised James and Hunter Biden that it would invest $2 million, and quickly delivered half of it.

That deal eventually fell through and the money was returned. But it highlighted the close ties that Joe Biden and his family have developed with SimmonsCooper, an Illinois law firm that specializes in asbestos litigation — a multimillion-dollar line of business that was under threat in Congress.

In addition to providing financing for the hedge fund deal, SimmonsCooper picked the law firm of another of Biden’s sons, Beau, to work with it on dozens of asbestos cases in Delaware. 'It was only natural that we worked with my friend Beau Biden and his firm,' said Jeffrey Cooper, longtime former managing partner of SimmonsCooper.

SimmonsCooper attorneys have contributed hundreds of thousands to campaigns of Senator Biden, his other son Beau Biden, and John Markell, current candidate for governor, while turning Delaware into a national magnet for asbestos lawsuits.

In the hedge fund case, Hunter Biden and James Biden seek to shift their debt to former partner Joseph Lotito through counterclaims in a fraud suit he filed against them. New York State Supreme Court Justice Bernard Fried rejected their bid in May, ruling that they should have checked out the fund more carefully.

"These counterclaims, conditionally pleaded, do not rest on a justiciable controversy, but seek only to foment uncertainty and chaos between the parties in the event that plaintiff is successful in presenting the main claims," Fried wrote.

"Such pleading will not be countenanced," he wrote.

He held that Hunter Biden and James Biden can't allege misrepresentation when they failed to allege their own due diligence.

SimmonsCooper committed $2 million but withheld the second million after seeing how Lotito wasted the first million, according to Hunter Biden and James Biden.

In 2005, SimmonsCooper shifted its focus away from Madison County, Illinois, after Chief Judge Edward Ferguson transferred the mammoth asbestos docket from Circuit Judge Nicholas Byron to Circuit Judge Daniel Stack. The firm targeted Delaware because many businesses incorporate there and the firm's roster of defendants always includes Delaware corporations.

No one at SimmonsCooper held a Delaware law license, so Beau Biden's firm filed the suits and SimmonsCooper identified itself as, "of counsel."

On New Year's Eve 2005, SimmonsCooper attorneys, staff and spouses contributed at least $52,250 to Biden's campaign for a seventh Senate term. In the following five weeks the firm contributed at least $56,100. Campaign reports don't allow full accounting from any source because contributors ignore employment information requests or many channel cash through others.

While SimmonsCooper backed Joe Biden's reelection, he prepared to run for president. Hunter Biden meanwhile earned his living as a lobbyist, but not for long.

According to court records filed by Lotito, Joe Biden wanted Hunter Biden to find a different line of work because he couldn't afford to run for president as father of a lobbyist.

Lotito met James Biden in 2002 and they invested together in 2005, according to Lotito.

Majority owner James Parks had started Paradigm in 1991 and successfully promoted it as less volatile than most hedge funds.

Everyone agreed that the Bidens and Lotito would form a corporation to buy 54 percent of Paradigm for $21.3 million in cash.

They would install Hunter Biden as chief executive officer at a salary of $1.2 million.

In May 2006, SimmonsCooper invested $1 million.

In June 2006, according to Lotito, the Bidens told him to stay away.

In August 2006, according to Lotito, the Bidens formed a corporation, executed a promissory note for $8.1 million, and purchased Paradigm's assets.

In September 2006, Lotito signed an agreement relinquishing his third of LBB.

He sued the Bidens in January 2007, alleging fraud and breach of fiduciary duty.

Attorney Brian Wille claimed the Bidens made a secret side deal, terminated Lotito's rights, and fraudulently induced him to sign away his interest in LBB.

Willie wrote that Lotito found investors and the Bidens rejected them.

He wrote that the Bidens intimidated Lotito and accused him of receiving kickbacks from Fasciano.

"Ultimately, the Bidens threatened to use their alleged connections with a former U.S. Senator to retaliate against counsel for insisting that his bill be paid, claiming that the former Senator was prepared to use his influence with a federal judge to disadvantage counsel in a proceeding then pending before that court," Willie wrote.

For the Bidens, Nicholas Gravante answered that Lotito failed to tell them that Fasciano would soon go to federal prison on a fraud conviction. Gravante alleged that Lotito exaggerated Paradigm's value.

He alleged that Lotito failed to tell the Bidens that Parks had acted for years as absentee owner of Paradigm due to substance abuse.Gravante filed a counterclaim and brought it to a hearing before Fried in June 2007.

Gravante called Lotito a criminal, and Fried asked where his pleadings called him that. Gravante stammered and Fried said, "In my courtroom I would like you to restrict yourself to acting civilly."

Fried said, "You have accused him of being a criminal in this courtroom and it's not in these papers."

Gravante said, "He is accused of crimes. I don't call him a criminal, correct."

Fried rejected the counterclaim last September but ruled that the Bidens could amend it. Gravante amended it to allege that LBB "specifically recruited SimmonsCooper as a result of Lotito's and Fasciano's misstatements and omissions."

SimmonsCooper withdrew, he wrote, and its investment converted to debt.

At a hearing this January, Gravante said the Bidens had "an uncheckered history." He said, "These are reputable people - discovery will bear that out - who wouldn't have agreed to have that kind of an attorney do this work for them."

In May, for the second time, Fried rejected the counterclaim.

"Certainly defendants do not claim that the law permits sophisticated investors to rely on whatever representations a potential advisor makes without the need for a diligent inquiry by defendants, and that such representations are actionable if they wind up to have been faulty," Fried wrote.

Although the dispute hinges on the SimmonsCooper investment, neither side has alleged that Lotito knew or didn't know that SimmonsCooper would invest.

The Bidens have told Fried they will need to depose SimmonsCooper attorneys.

http://www.madisonrecord.com/news/215023-bidens-owe-simmonscooper-1-million-in-hedge-fund-deal
Posted by Alex Constantine at 10:46 AM