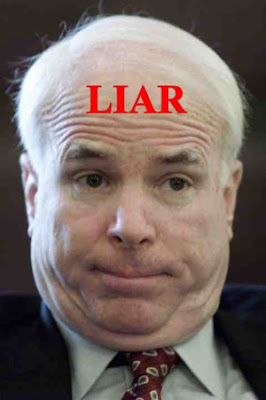 That one claimed last night that Obama has received the most money from Fannie and Freddie, well, according to a list created by the New York Times, he was mistakingly talking about himself. Looking at contributions from "directors, officers, and lobbyists for Fannie Mae and Freddie Mac" for the 2008 campaign cycle, we see that McCain has received $169,000, whereas Obama has only received $16,000.

Palin, in Florida yesterday, showed her true wickedness. Her factitious rant about Obama in front of a crowd yesterday in Florida provoked a man in the crowd to yell "kill him" in reference to Obama. ...

Senator John McCain may be trying to sell himself as a "maverick" and a "straight talker" who will tell the truth no matter the consequences, but independent, non-partisan watchdog groups aren't buying it.

In the last two weeks, the McCain campaign, through advertisements, television appearances, and surrogates have changed their tone and language by calling into question Senator Barack Obama's character. The McCain campaign is attempting to cast a shadow on Obama's honesty. They have called Obama a "liar," stating that he simply "isn't honest," and that many of Senator Obama's statements have been debunked by fact checking organizations.

While there is some truth that fact checking organizations have found that Senator Obama has made claims that are false, the McCain campaign is entering dangerous territory, as they are allowing a conversation to begin on how ofter Senator McCain lies. As it stands, an analysis of non-partisan fact checking organization reports show that statements by Barack Obama are more likely to be true versus statements by John McCain.

PolitiFact, a non-partisan organization ran by the St. Petersburg Times and the Congressional Quarterly tracks major claims and comments made by candidates at campaign events, in advertisements, during debates, and in other forms of media. Since August 1, 2008, PolitiFact has researched and made findings on 42 statements by Barack Obama and 45 statements by John McCain.

What is even more troubling, is that when the statements are tracked from the beginning of the presidential campaign, Senator McCain was also 600% more likely to make a "PANTS ON FIRE" claim, which is the worse kind of lie, one that ignores any truth or fact altogether.

The McCain campaign ends most of their ads by asking a question, "Is Barack Obama Ready to Lead?" and they answer by simply stating..."NO!" The better question should be "Is John McCain Ready to Start Being Honest?" While only John McCain can answer that question, one thing seems to be convincing based on the evidence, John McCain would rather lose his integrity than lose an election.