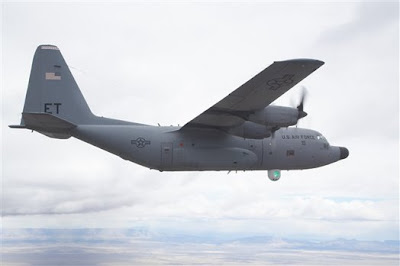 A C-130 transport aricraft carries the Advnaced Tactical Laser, which fires from a turret under the plane's belly.

Since the first Gulf War 18 years ago, television viewers have come to know airstrikes by the black and white guncamera videos, the explosions so large that they take up the entire TV screen. However, those videos might become a thing of the past as the military embraces a new airborne weapon that could transform the battlefield forever.

The U.S. Air Force this week awarded Boeing a contract valued at up to $30 million to continue testing a flying laser cannon, Boeing announced Tuesday. The new weapon will enable the United States to conduct more effective air strikes, which the military has always conducted with exploding munitions. Boeing’s Advanced Tactical Laser fires an ultra-precise energy beam that can readily destroy ground targets such as tanks, vehicles and personnel.

“Lasers can create fires, they can kill,” said Manijeh Razeghi, an engineering professor at Northwestern University, who has developed lasers for the military. “Each [laser] wavelength has some application. Some of them you know about, some of them are classified and we cannot speak about them.”

Neither Boeing nor the Air Force responded to requests for comment.

The Advanced Tactical Laser uses a rotating turret under the belly of a C-130 transport aircraft to aim its beam. Operators will be able to exercise a new degree of control over damage to ground targets by choosing specific aim points (such as vehicle tires) and laser shot duration.

With the laser, “targeting the fuel tank of a vehicle could result in total destruction of the vehicle, while targeting a tire might result in the vehicle stopping without injury to the driver,” according to a Boeing statement. Boeing claims this degree of control over the weapon’s destructive power will allow operators to eliminate the risk of collateral damage normally associated with conventional strikes.

A complex gas system enables the Advanced Tactical Laser to fire its destructive beam. Commenting on such gas system lasers, Razeghi said they require "a lot of electricity, a lot of power, and at the same time you cannot have any wavelength that you want, or any energy that you need. They have to use a lot of filters and grading in order to have the wavelength that they want."

The military already uses lasers in many capacities, such as in communications equipment, weapon guidance systems and air countermeasures. But deploying lasers as direct attack weapons might open up a new frontier in military strategy.

For its part, the Air Force has devoted a significant amount of resources to researching directed-energy weapons. Last month, the Air Force announced it completed a bioeffects study on a vehicle-mounted, nonlethal energy weapon called the “Active Denial System.” This device emits a beam of radio waves, rapidly heating a human target’s skin, causing the individual to flee, according to an Air Force statement.

Some human rights groups have protested the development and use of directed-energy weapons, claiming they may be illegal under international law. Lasers have long been at the forefront of that criticism. For example, American troops in Iraq have been issued rifle-mounted “dazzlers,” or low-power lasers designed to temporarily blind targets.

Human Rights Watch protested in 1995 the military’s development of such lasers, prompting a 1998 amendment to the Geneva Conventions, prohibiting the use of weapons “specifically designed, as their sole combat function or as one of their combat functions, to cause permanent blindness to unenhanced vision.”

The Defense Science Board, a government committee that advises the Department of Defense, stated in a 2007 report that the dazzlers issued to U.S. troops have a “minimum distance that the operator must avoid to preclude risk of eye injury.”