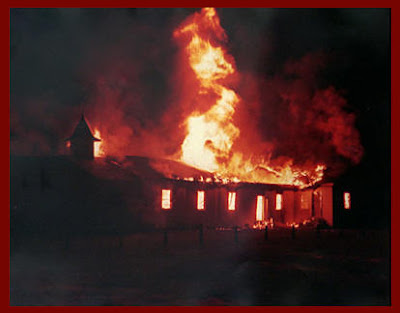 PHENIX CITY, Ala. (AP) — Two men who authorities said dabbled in satanism have been arrested in connection with a recent rash of arson and vandalism at rural churches.

Satanic graffiti was scrawled at or near some of the east Alabama churches, including "Teach children to worship Satan!!", which was painted on a Sunday school classroom wall.

Fires were set at three churches over four days beginning Jan. 1, destroying one of the buildings, and a task force of federal, state and local authorities was formed last week to investigate. Satanic graffiti was found in or near two of the churches and a fourth that was not burned.

Authorities told church members that Parquette's grandmother, whom he lives with, helped them solve the case, said Derrick Millirons, a member of Woodland Baptist Church. The classroom graffiti were left in that church, which suffered heavy damage to its sanctuary in a fire Friday.

A brass cross taken from a church was found at the grandmother's home by the housekeeper, Millirons said. He said that Parquette told his grandmother that Clark gave it to him, but that she called authorities when he left and she found other items taken from churches.

Jim Cavanaugh, regional director of the federal Bureau of Alcohol, Tobacco, Firearms and Explosives, said crosses, robes and documents were taken from the churches. Investigators found some of these items at the homes of the suspects, he said.

Boswell, the sheriff, said Parquette and Clark, both of the Smiths community in Lee County, were not part of any organized group.

Neither had an attorney Monday, and both remained in custody. Bond was set at $200,000 for Parquette. No bond was immediately set for Clark.

The Rev. James D. Parker, pastor at Greater Peace and Goodwill AME Church, said its 40 members were ecstatic over the arrests and not surprised about the allegations regarding satanism.

"You're going to have people like that. Even when you serve the Lord, you're got to realize there are two sides," said Parker, whose Russell County church was moderately damaged in a New Year's Day fire.

The arrests came two years after another string of deliberately set fires at rural Alabama churches led to a major federal-state investigation. Three Birmingham college students were arrested, pleaded guilty and were sentenced to prison.