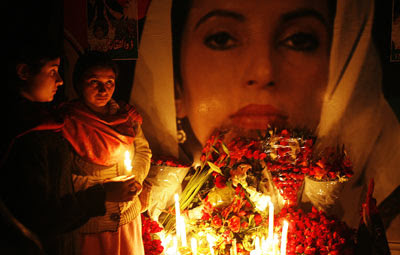 Britain’s Channel 4 News has broadcast new video of the attack on Benazir Bhutto. Channel 4 described the video as “apparently contradicting the official version of events, which insists that Benazir Bhutto was not shot.” The Channel 4 report, by correspondent Jonathan Rugman, argues forcefully that Ms. Bhutto was shot by an assassin, who is clearly visible in the new video, moments before a suicide bomber detonated an explosive device beside the vehicle she was standing in.

Mr. Rugman’s report appears to use the same footage which was broadcast on Saturday by Pakistan’s DawnNews TV. Stills from the video were then published on the front page of the Pakistani newspaper Dawn on Sunday, illustrating a report by Bahzad Alam Khan, who described the images as a significant blow to what The Times’ Jane Perlez calls “the government theory that Ms. Bhutto had died by hitting her head on a lever of her car’s sunroof during the attack.”

According to Mr. Khan, the video has had an immediate impact on the debate in Pakistan over just what happened in Rawalpindi’s Liaquat Park on Thursday.

The controversy over the manner in which former prime minister Benazir Bhutto died in a Dec 27 attack in Rawalpindi deepened on Saturday night when DawnNews TV aired chilling images of an armed assassin taking a shot at her as she acknowledged the cheers of jubilant party activists from the sunroof of her bullet-proof vehicle. The government has insisted that Ms Bhutto died when her head slammed against her vehicle by the blast from a bomb. But the Pakistan People’s Party has held that she died from bullet wounds.

Shot by an amateur photographer, the images telecast by DawnNews TV make it abundantly clear that there was no security cordon around Ms. Bhutto’s vehicle. They show a young clean-shaven man, wearing a waistcoat and dark glasses, inch inconspicuously towards the slow-moving vehicle of Ms Bhutto. Standing closely behind is a man believed to be the suicide bomber with a piece of cloth draped around his face. The first image catches the duo looking straight into the camera. Another image shows the sharpshooter open fire on the unsuspecting political leader with remarkable aplomb. He is just a couple of metres away from his target. One of the party activists clinging to the vehicle seems to have spotted the assassin, whose upraised hand carries a gun.

The third image shows activists around the vehicle ducking their heads in reflex, suggesting that the gun has been fired. Unfazed, the assassin is still in their midst. Crucially, Ms Bhutto has disappeared from the sunroof. And, equally crucially, the suicide bomber has yet to blow himself up.

The unsettling images … seem to lend credence to the assertion made by a close aide of Ms. Bhutto who insisted that the opposition leader was shot in the head and neck.