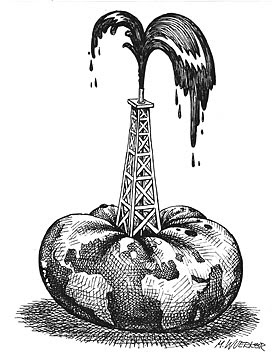 When writing about peak oil and related matters in the category of doom and gloom, one encounters Nietzsche’s paradox: There are only two kinds of readers, those who already know, and those who will never know, so why bother? Isn’t it the case that to be caught in such a circle is solid evidence of an obsessional neurosis?

Lamborghini owners assume they can buy themselves out of any situation: If a couple of bucks will keep my kid out of jail, it’ll work the same wonders if I encounter a gang of long-bearded cannibals in the year 2030. But Lamborghini owners have at least the advantage of knowing on a semi-conscious level. Far less can be done with those who truly know nothing. And then there is that curious in-between group with its fifteen-word song: "It doesn’t matter if we run out of petroleum, because alternative energy will save us." Which is psychologically least healthy, then: to be the owner of a Lamborghini, or to be carrying a placard announcing the end of the world?

The value of talking about oil is that it is a fairly tangible issue. Talking about more general matters of systemic collapse, on the other hand, has the tendency to overwhelm the reader — as if peak oil were not overwhelming in itself. Of course, it’s really systemic collapse that matters, and that is why the Club of Rome wrote The Limits to Growth. But that was 1972, and that book still has very few readers.

Systemic collapse means the loss of oil, food, water, metals, and electricity. But these issues in turn lead to more abstract ones, such as the loss of democracy, the loss of freedom of the press, and the loss of educational standards. Not to mention money melting like snowflakes. When the material substructure is rotten, the more fragile matters of civilization also tend to deteriorate.

It would be possible to write an entire book on the psychology of disaster. Fire and flood, earthquake and tornado, explosion and collision, robbery and arrest — our response is always the same. The Irish potato famine, the 1929 stock-market crash, and the rise of Nazism were all received in the same manner: widespread denial, followed by a rather catatonic apathy. But those historical events at least reached an end. The systemic collapse that we are now undergoing has no such end. There will be no return to normal. There may very well be a return to happiness, but there will be no return to "normal." We will become like the Australian aborigines: naked on the outside, but with a rich interior life. There will be no more television. And that is why it may be obsessional and ultimately self-destructive to be talking about disaster.

It would be more positive, more pro-active, to deal with survival skills, rather than with prophecies of doom. Instead of reading one more article about the fact that food prices are skyrocketing worldwide, it may be healthier to get out the seed catalogs — which are being published at this time of year — and ask oneself: Which corn is better, Iroquois White, Mandan Bride, or Painted Mountain?

It’s strange how little it takes to get into a better mood. Depression isn’t a matter of neurotransmitters, serotonin, endorphin, or any other biochemical that results in a doctor’s prescription for ten-dollar tablets. It’s more a matter of what Abraham Maslow called the hierarchy of needs. The higher needs involve such issues as security, freedom, love, curiosity, and that mysterious thing called self-actualization. Not that Maslow is the final word on psychological matters, of course; perhaps one could do as well reading Tolkien.

But what a doctor might never comprehend is that pharmacology is Big Business, and that Big Business means Big Propaganda. The triad of government-business-press creates an all–pervasive propaganda that travels through society in the same way that a mid-winter germ travels through the nose, throat, ears, lungs, kidneys, and intestines. Surely any doctor could understand that comparison. But some doctors are convinced that there is a pill for everything.

So once again we come back to the problem that very few people are listening. In a totalitarian society, the human mind is in a sense atrophied. Without access to information on a broad scale, the average person simply assumes that the official news is the absolute truth.

Thanks for the prescription, Doc, but no thanks. If you aren’t crazy, there’s something wrong with you.

Peter Goodchild is the author of Survival Skills of the North American Indians, published by Chicago Review Press. He can be reached at petergoodchild@interhop.net.