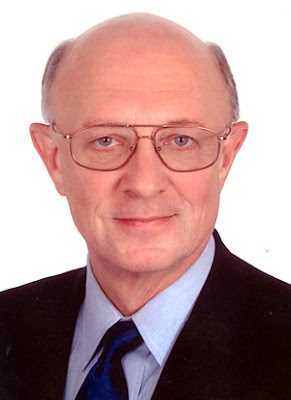 It is quite remarkable that a coterie of neocon intellectuals and influence peddlers can exhibit bizarre personal behavior, prove utterly incompetent in high appointive office, manufacture entirely false evidence to propel us into a disastrous war, and yet still have people willing to listen to them. ...

Case in point: James Woolsey, who just last November at Purdue was trying to sell us another war, saying, "If you don't think Iran is interested in nuclear weapons … I've got a bridge in Brooklyn I'd be happy to offer you. Of course it's a nuclear weapons program." Change "Iran" to "Iraq" and you'll find Woolsey used the same turn of phrase to market the Iraq fiasco.

Woolsey has a remarkable record, even for a neocon; he has gone from searching for flying saucers at the CIA to claiming anybody who didn't believe in a Saddam/al-Qaeda connection was "illiterate." Now he's trying to provoke "World War IV" with half the Muslim world.


Woolsey claims that in the 1960s he and his wife Sue actually saw a UFO. Now back in the '60s there were plenty of reasons folks might have seen strange things, but let's give the Woolseys the benefit of the doubt. In any event, when President Clinton appointed Woolsey to head the CIA in 1993, the new director of Central Intelligence immediately tasked senior officers with combing the files to ferret out secret information about flying saucers and extraterrestrials. Not satisfied with the explanation that the CIA had no secret UFO files, Woolsey commissioned a report, CIA's Role in the Study of UFOs, 1947-1990, which was released in 1996, the year after his resignation.

When Woolsey departed the CIA after a scant two years on the job, his excuse was that he hadn't been able to establish a personal relationship with President Clinton. Far more likely, however, is that Woolsey quit because he was unable to win the respect of his subordinates, who found his fixation with UFOs highly amusing. Within the CIA Woolsey had come to be regarded as a kook. Adding to Woolsey's discomfort was congressional criticism for his handling of the Aldrich Ames spy scandal. Ames was a longtime CIA employee who had been tipping off the Soviets for years about the presence of CIA-run moles within their intelligence services. When Ames was finally unmasked, Woolsey's response was simply to reprimand several officers, most of whom had already retired, and to blame the entire disaster on "systemic failure" within the agency.

Woolsey's time at the CIA was not entirely wasted. Although a corporate lawyer by training, he seems to have learned a certain amount of trade craft, especially disinformation skills, which he would later employ to help fabricate the case for removing Saddam Hussein from power. By the late 1990s Woolsey had jumped on the "get Saddam" bandwagon. He was a signatory, along with fellow neocons Elliott Abrams, John Bolton, Richard Perle, and Paul Wolfowitz , of the Project for the New American Century's letter to Bill Clinton that called for "the removal of Saddam Hussein's regime from power" using "a full complement of diplomatic, political, and military efforts." Sept. 11 gave Woolsey and his associates their opportunity, and they began working diligently to shift the government's emphasis from destroying al-Qaeda to invading Iraq.

Shortly after the 9/11 attacks, Secretary of Defense Donald Rumsfeld sent Woolsey to the UK to find a link between Saddam and al-Qaeda. Woolsey came back with a story alleging that Mohammed Atta had met a senior Iraqi intelligence official in Prague shortly before Sept. 11. Never mind that only the most slender evidence supported the tale and that the FBI soon determined that Atta had been in Virginia Beach on the day in question; the story was told and retold, especially by Vice President Cheney, and believed by a significant segment of the American public.

Woolsey's intemperate speech and captious manner between 9/11 and the invasion of Iraq reveal him to be a fanatic bent on war at any cost. Shortly after 9/11, Ted Koppel interviewed a James Woolsey very keen to make the case for war against Iraq. When Koppel observed that "Nobody right now is suggesting that Iraq had anything to do with [9/11]. In fact, quite the contrary," Woolsey replied, "I don't think it matters. I don't think it matters." And Woolsey couldn't restrain himself when attacking the French and Germans for refusing to hew to the neocon line on Iraqi WMDs: "If you believed him [Saddam] when he said, oh, that biological weapons program, well, we destroyed all that … if Mr. Chirac or Mr. Schroeder believes that, I've got a bridge in Brooklyn I'd be delighted to sell them." Woolsey subsequently provided a wonderfully detailed but entirely fictional description of Saddam's nonexistent bioweapons: "In addition to hiding many tons of growth media for biological agents and pursuing its work on smallpox and anthrax, Iraq is the only nation in the world to have weaponized aflatoxin, whose primary purpose is to cause liver cancer in children."

In 1998 Woolsey and his law firm, Shea & Gardner, were instrumental in obtaining $100 million from Congress to fund the Iraqi National Congress, a group of refugees, opportunists, and political hangers-on dedicated to regime change in Iraq. The INC was led by master fraudster Ahmed Chalabi, who, before he became a favorite of Congress and the vice president's office, had been convicted in absentia of embezzling $230 million from Petra Bank in Jordan. Chalabi's objective was not only to use Uncle Sam to remove Saddam from power but also to get himself appointed in Saddam's place.

To build the case for war, Chalabi provided a steady stream of Iraqi defectors with fake stories about Iraqi WMDs and Saddam's al-Qaeda connections. Favored members of the media were also made privy to the defectors' tall tales. In February 2002 Woolsey personally arranged to have Mohammad Harith, an INC-supplied defector, introduced to the Department of Defense and the Defense Intelligence Agency. Harith claimed falsely that the Iraqi regime had bioweapons labs disguised as yogurt and milk trucks. Ultimately Harith's story made it into the Bush administration's case for invasion, even though the CIA had labeled Harith a fabricator. Woolsey also met with another Chalabi-sponsored defector, who famously but falsely claimed that an Iraqi training facility at Salman Pak was being used to instruct Iraqis and foreign jihadists in aircraft hijacking.

Not satisfied with the overthrow of the Iraqi regime, Woolsey has argued vehemently that Syria, Iran, the Palestinian Authority, Saudi Arabia, and even the U.S.-allied military dictatorship in Egypt all represent major threats to the United States. In the wake of the U.S.' initial apparent success in Iraq, Woolsey remained a strong advocate of remaking the Middle East by force and even gave the name "World War IV" (World War III having been the Cold War) to the endeavor.

Woolsey contends that Western-style democracy ought to be substituted for most of the governments in the region, whether they be socialist dictatorships, military governments, traditional monarchies, or Islamic regimes. Regrettably, Woolsey's knowledge of the Middle East is quite limited and his analysis flawed. He does not understand that most Middle Eastern societies value Islamic tradition and Sharia law far higher than what they see as foreign notions of liberal democracy. The Iraqi experience with democracy since 2003 has done nothing to alter that view.

As part of his argument for radical and violent change, Woolsey asserts that the hostility of many Arab and Muslim societies to the West and Western ideas is rooted in the nature of their autocratic, Islam-influenced governments. But in making this assertion he conveniently overlooks the long history of unwanted and destructive Western interference in the Middle East, a few of the more egregious examples being the Sykes-Picot Agreement, the establishment of Israel and the marginalization of the Palestinians, the installation of the shah in Iran against the wishes of the Iranian people, and the invasion of Iraq.

In view of the disaster the U.S. has created in Iraq, both for ourselves and for the Iraqis, one would like to think that Woolsey has rethought his views about violent change. But no: in the summer of 2006, while Israel was bombing Lebanon with U.S.-supplied munitions once again, another activity unlikely to engender love for the U.S. in the Arab world, Woolsey advocated that the U.S. widen the war by bombing targets in Syria.

Woolsey apparently thinks Syria is ripe for regime change, and he consistently denounces its government as a "fascist" dictatorship, although Syria's agglomeration of disparate ethnic and religious groups – Druze, Alawite, Sunni, Shia, Armenian, Chaldean, and Eastern Orthodox – hardly fits the German or Italy model of a nation united by culture and blood anxious to invade surrounding states. And before Woolsey continues his propaganda war against Syria, he needs to explain why a million and a half Iraqis prefer to live as refugees in Syria under a "fascist" dictator rather than in the liberal democracy his advocacy has helped create in Iraq.

James Woolsey did get one thing right: "As we move toward a new Middle East … we will make a lot of people very nervous." But the folks who are the most nervous today are not in the Middle East; they're elected and appointed GOP officeholders who are going to find themselves unemployed this time next year.

http://www.antiwar.com/orig/jtaylor.php?articleid=12208
Posted by Alex Constantine at 2:59 AM