Excerpted comments from the Raw site on Goldberg's reverse polarization of the political spectrum: 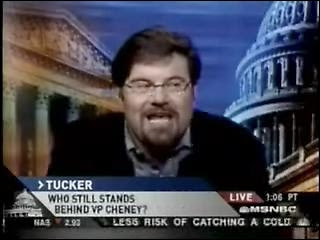 What would you expect from the son of Lucianne Goldberg- the trashy hag who controlled Linda Tripp's devious activities? And of course little Jonah, the complete fascist momma's boy, proves that a FRUIT doesn't fall far from the tree.

GimmeABreak
•••••••
But isn't it silly that anyone should publish this effete gasbag beneficiary of nepotism, who must be in some kind of race with Hitchens and- the rest of their ilk-to change the connotation of the word 'contrarian' from 'critical thinker' to 'Benjy Compson-as Lucien Goldberg's kid', or maybe 'I am in a sophomoric free-associative bull session with myself (jerking off included)'.

And Jonah just covets the Coulter money machine, which buys a lot of Willy Wonka bars. Nevertheless, the effort of Goldberg to imitate the
masculinization process pioneered by Wayne Newton is noted; the world was waiting on a chubby Bert Reynolds, or whatever that is.

joecgillis
•••••••
Someone needs to read an encyclopedia or a dictionary.

Two types of totalitarianism may be distinguished: NAZISM and FASCISM on the right and COMMUNISM on the left. While sharing the ideological and organizational features discussed above, the two differ in important respects. Right totalitarian movements, such as the Nazi party in Germany and the Fascists in Italy, have drawn their popular support mainly from middle classes seeking to maintain the status quo and advance their own social position. Left totalitarianism, such as that of the former USSR, relies instead on a lower or working class seeking to eliminate, not preserve, class distinctions.

Note how fascism "supported and enforced the private ownership of industrial wealth!"

OK, how about Mussolini's own description of fascism?

"Fascism should more appropriately be called Corporatism because it is a merger of State and corporate power." Benito Mussolini (Facist Dictator of Italy, our enemy during WW2!)

Now Liberalism is really a moderate, at most slightly left of center approach. Basically: Open-minded, in favor of minor reform, generous, unbiased, in favor of freedom, and anti-aristorcracy and dictatorship...

lib·er·al /ˈlɪbərəl, ˈlɪbrəl/ Pronunciation Key - Show Spelled Pronunciation[lib-er-uhl, lib-ruhl] Pronunciation Key - Show IPA Pronunciation
–adjective
1. favorable to progress or reform, as in political or religious affairs.
2. (often initial capital letter) noting or pertaining to a political party advocating measures of progressive political reform.
3. of, pertaining to, based on, or advocating liberalism.
4. favorable to or in accord with concepts of maximum individual freedom possible, esp. as guaranteed by law and secured by governmental protection of civil liberties.
5. favoring or permitting freedom of action, esp. with respect to matters of personal belief or expression: a liberal policy toward dissident artists and writers.
6. of or pertaining to representational forms of government rather than aristocracies and monarchies.
7. free from prejudice or bigotry; tolerant: a liberal attitude toward foreigners.
8. open-minded or tolerant, esp. free of or not bound by traditional or conventional ideas, values, etc.
9. characterized by generosity and willingness to give in large amounts: a liberal donor.
10. given freely or abundantly; generous: a liberal donation.
11. not strict or rigorous; free; not literal: a liberal interpretation of a rule.
12. of, pertaining to, or based on the liberal arts.
13. of, pertaining to, or befitting a freeman.
–noun
14. a person of liberal principles or views, esp. in politics or religion.
15. (often initial capital letter) a member of a liberal party in politics, esp. of the Liberal party in Great Britain.
[Origin: 1325–75; ME < L līberālis of freedom, befitting the free, equiv. to līber free + -ālis -al1]
Gordy Sumner
•••••••
The only difference between this tool and a nut that screams into a bullhorn on a public corner, is that goldberg has no bullhorn.

This is the last vestiges of the stupid right. desperate to find something to keep the tsumani of change from crashing down on their straw houses.

Thomas Jefferson
•••••••
It's about time this artificially enhanced issue started becoming more prominent in the news. Anyone who's visited a liberal website that allows comments in the past 10 years can see that there's a concerted effort by fanatical Christians and Jews to paint the left as being like the right. This just fits into these scumbags larger goals of obfuscating the truth about what's going on in or world these days. BTW, Fuck you Thomas, you're with 'them'.

Yea, I'm gonna run right out and buy a whole book of that.

Lucian
•••••••
His defacto, "You haven't read my book!" to his hosts suggests his publicists didn't read it either.

The author would do himself some good by looking up the definition of liberal. It is an adjective, not a noun.
Darin Simmer
•••••••
... [Goldberg] goes on about how business without regulation would be much better and says regulations cause monopolies. ...
brian
•••••••
Wow - liberals were the spawn of Lenin, Stalin and Mao for many years. Now we are the spawn of Mussolini and Hitler. ...
Johnny
•••••••
Jonah, "Teachers for America" has a job waiting for you. Sign up. You'll be transported to one of dozens of impoverished areas where disadvantaged communities need good teachers to lead them into educational and career opportunities. You're the perfect candidate, as you surely need to start a career, and you have the leadership skills to substantively help poor folks. Go for it, Jonah. ...
Eyeball Kid
•••••••
Fascism is defined as an ultra-right wing government. Corporations, religious leaders, and politicians colluding.

That is the opposite of liberal or left thinking.

It's all part of the Rovian playbook. Accuse the other side of what you are. Like the ridiculous "Islamofascists" In order to call some organization fascist, they have to be running an above ground enterprise together with business. They are kept in power by a corrupt military. Burma is a good example of a fascist system. It cannot describe a relatively small, hidden, extremist group of people like Al Qaeda.
greenmonkey
•••••••
People like Goldberg ... are killing their Grand Old Party with their own hands. We need to scream from the rooftops so that people hear what Goldberg and his ilk are saying. This is your Republican party, America! How do you like it? ...

Republicans have been committing party suicide for a number of years now, and the hands on the trigger are the likes of Goldberg, Coulter, O'Reilly, Limbaugh, etc., etc.

From the bottom of my liberal heart, I want to say THANK YOU!
Thomas Paine
Posted by Alex Constantine at 2:04 PM