Philip Agee Versus the CIA 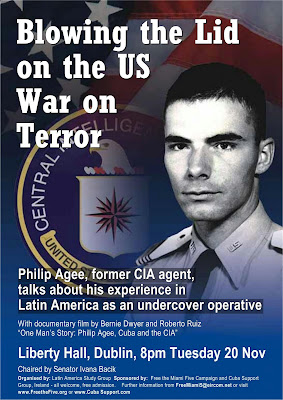 Philip Agee, the former CIA agent who in 1968 had the courage to resign from an agency that was known for its criminal support of bloody dictators, claims that he made up his mind, one year before, the moment a woman he was sitting with in a restaurant in Mexico burst into tears upon hearing the news of Che Guevara's death.

This one anecdote exemplifies all the honor and integrity of the man who passed away at 73, this January 7, in the city of Havana, on Cuban soil where he continued to denounce the terrorist and subversive activities perpetrate by the U.S. intelligence service against the progressive governments and leaders of the continent.

Phillip B. Agee, a U.S. citizen, was a CIA officer working in Latin America for 12 years (Ecuador, Uruguay and Mexico) before his conscience forced him to leave its ranks in 1969. At that time his cover was working in the U.S. embassy in Mexico as an attaché to the 1968 Olympics. In 1967 he had been assigned to the CIA station in Mexico as reinforcement for the upcoming Games.

"Millions of people all over the world had been killed or had their lives destroyed by the CIA and the institutions it supports," Agee declared in a 1975 interview.

"I couldn't just sit by and do nothing ," he added.

Upon leaving the Company, while enduring threats and constant persecution that put his life in danger on more than one occasion, he managed to write the book "Inside the Company: CIA Diary."

This ingenuous synthesis of the criminal activities of the CIA in the Americas, was published in 1974 accompanied by an annex containing 22 pages of names of undercover agents dispersed across the continent. It was a bomb that blasted through all sectors of U.S. intelligence.

Determined to eliminate him, the CIA entrusted former Miami station chief Ted Shackley, known as the Blonde Ghost, with the mission to capture him. Agee was forced to leave France and took refuge in Cambridge, England; but Agee was then expelled by the British at the request of Washington.

Successively prevented from settling in Italy and in the Netherlands, where authorities were constantly pressured to deny him any kind of migratory status, and stripped of his U.S. passport for being a "threat to national security," Agee took refugein 1980 on the Caribbean island of Granada while it was under the revolutionary government of Maurice Bishop.

With the U.S. invasion of that small country in 1983, he fled to Nicaragua. And after the Washington-backed counterrevolution prevailed there, he accepted the offer of Cuba's hospitality.

Despite all the danger and difficulties, Agee published Dirty Work : The CIA in Western Europe , with Louis Wolf, as well as several essays and articles. He also granted interviews and assisted journalists in search of information.

On five occasions, the U.S. government attempted legal action against him for revealing secrets; but without success. His former bosses worried about the damage he could cause with the enormous amount of information he still retained.

Rabid, George Bush Sr., former CIA chief recycled into president who sponsored the formation of the terrorist organization CORU and operation Condor, labeled him a traitor and defamed him on numerous occasions. His wife Barbara, was forced to retract slanderous charges included in her autobiography.

A faithful friend of Cuba, Agee revealed how the island was victim of a new CIA global program to finance and promote so-called dissident organizations under the auspices of the Agency for International Development (AID) and a foundation expressly established in 1983 with this objective, The National Endowment for Democracy (NED).

While the New York Times, upon announcing his death, rebuked him for the significant "damage" he caused to the U.S . intelligence agency, the progressive media worldwide, to the contrary, recognized his service to humanity as a true patriot, for having unmasked an organization that took the use of violence to an extreme unprecedented by a contemporary power.

A power that while it protects a terrorist like Luis Posada Carriles, it continues to incarcerate, in sub-humane conditions, five anti-terrorist Cuban agents who attempted to thwart plots against their homeland.

With the entire world shocked by the torture inflicted on prisoners at Abu Ghraib, Guantanamo and the expansive network of interrogation centers run by the CIA around the globe, and with the discovery that the agency, in collusion with members of the Bush government have destroyed hundreds of hours of videotapes of interrogations employing "severe" techniqueswhat would a CIA agent think who joined the organization with the illusion of defending his country?

How many honorable members among the more than 20,000 that make up the immense machine have asked themselves, like Philip Agee did, if the time has come to give up the advantages of their position, finally change the course of their life, and join the struggle of billions of human beings who, armed only with the strength of their conviction, believe that a better world is possible?