From the Drum Major Institute for Public Policy's Year In Review, "a hawk's eye view of what the think tanks on the conservative right are up to." Read the full report on this year in politics and policy on our website.

The Manhattan Institute continued to blame poverty on the poor in 2007, decrying the efficacy of any and all public efforts to address economic hardship (the Manhattan Institute doesn't suffer a similar affliction; they spent more than $12 million in 2006 to get out their message.) Par for the course was a Chicago Sun-Times op-ed by Senior Fellow Steven Malanga, who scoffed at efforts to raise the minimum wage or protect labor rights because "poverty in America results increasingly from the choices that people make, not our economic system's supposed shortcomings."

Along similar lines, Fellow Heather MacDonald deplored calls to expand social services for babies and children as "a pathetic diversion...as if the last 40 years of poverty policy haven't proven the futility of such money sinkholes." Noting that the lowest income Americans are often uneducated, underemployed, and disproportionately include single mothers struggling to raise children on their own, Malanga, MacDonald, and many of the nearly 40 other commentators on the Manhattan Institute payroll offer an uncomplicated prescription: the poor should simply get an education, get a job, and above all, get married. Nothing could be easier. 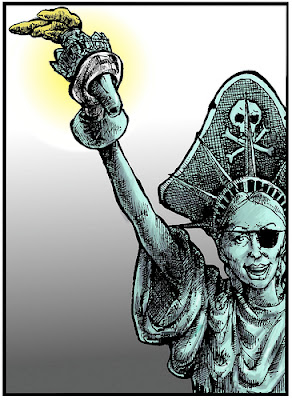 After more than 20 years fighting environmental protection and regulation of toxic waste and emissions, the Competitive Enterprise Institute, with the backing of the world's largest oil companies, today devotes some of its $3 million annual operating budget to propagating conspiracy theories about the scientific consensus on global warming. Climate scientists, according to Fellow Steven Milloy, are part of a sinister plot. "Averting planetary disaster is not what global warming alarmism is all about. There are many nefarious agendas driving the global warming controversy, none of them have anything to do with 'saving' the planet."

The first threat is "radical left-wing environmentalists whose goal...is global socialism." Other conspirators include "Europeans [who] now see global warming as a means of hampering U.S. economic competitiveness" and yes, even Wal-Mart, the conservative stalwart, which is scheming to sell compact fluorescent bulbs rather than the cheaper but less efficient incandescent variety. To Milloy, even a modest agenda to address global climate change amounts to a full-scale "recipe for social, political and economic disaster...for everyone, with the possible exception of the misanthropic, back-to-nature socialists among us." A fringe viewpoint? Perhaps, but as a regular contributor to FoxNews.com, Milloy enjoys a wide audience.

Washington's premier conservative think tank, the Heritage Foundation, will celebrate its 35th birthday in 2008 (no need for a present -- last year, they declared total assets of over $213 million). But if you imagine that their advancing age has encouraged mature and responsible thinking, think again. This year, Heritage Foundation "expert" and vice president of government relations, Michael Franc, stooped to a true low: comparing the new congressional majority to the terrorist mastermind behind the massacre on 9/11.

"I do not question the patriotism of these lawmakers," Franc avers, but "who would have thought that one of the chief challenges confronting congressional Democrats would be a need to distinguish themselves from Osama bin Laden?" What have Nancy Pelosi and her caucus done that makes it so hard for Franc to tell them apart from the brutal Al Qaeda leader? First, Franc points out that bin Laden opposes the Iraq war and believes that it has endangered America's international reputation. Congressional Democrats have also been heard criticizing the war, noting the international opinion surveys that show a less favorable impression of the U.S. What's more, Franc will have us know, bin Laden criticized capitalism in his latest video, while Senator Harry Reid speaks about the middle class squeeze. Finally, bin Laden thinks global warming is a threat and could ultimately lead to widespread death and displacement and "liberal lawmakers make these points every day." What's the lesson for the man who compares our nation's elected leadership to murderous terrorists? "Liberals need to wean themselves from... excessive rhetoric." We'll be right behind you, Mr. Franc.

According to their mission statement, The Family Research Council "champions marriage and family as the foundation of civilization, the seedbed of virtue, and the wellspring of society." But this mainstay of the far religious right isn't talking about just any marriage, or any family. Indeed their $22 million in assets are devoted to promoting a narrow and exclusive definition of both. "Society gives 'benefits' to marriage because marriage gives benefits to society," writes FRC's Peter Sprigg in USA Today, "Therefore, when those who are not married, such as people in homosexual or cohabiting relationships, seek to receive such public benefits, they bear the burden of proof. They must show that such relationships benefit society (not just themselves) in the same way and to the same degree that authentic marriage between a man and a woman does. This is a burden they cannot meet. Only the union of a man and a woman can result in the natural reproduction that is essential literally to continue the human race." Last time we checked, it was all too easy for cohabitating opposite sex couples to engage in "natural reproduction" -- especially as the FRC condemns abortion and contraception.

Founded in 1919 by 31st President-to-be Herbert Hoover, the Hoover Institution has been home to ultraconservatives like Donald Rumsfeld and Condoleezza Rice, enjoying an operating budget well over $38 million in 2007. As long-time advocates of tax cuts for the wealthiest individuals and corporations, Hoover has updated and revised its 1985 pitch for regressive taxation, "The Flat Tax."

Their plan calls for a flat tax on personal and corporate incomes that would effectively place a greater burden on America's struggling middle and lower income earners, while significantly lowering the amount paid by individuals and corporations who benefit the most from our economy. Their flat tax at a "low, uniform 19%" would actually raise taxes on the lower and middle classes, while dramatically cutting them for the highest earners. Sadly, it seems that if the Hoover Institution wins its 25 year struggle to raise the taxes of those least able to pay them, the promise of "a chicken in every pot and a car in every garage" will yet remain an even more dismal reminder of Hoover's failed public policy.

Rick Berman is quite a guy. Back in 1991, he founded the Employment Policy Institute which to this day doggedly repeats a single point in publications from The New York Times to The San Diego Union-Tribune: raising the minimum wage, instituting a living wage, and requiring employers to put a penny toward employee health care are all guaranteed to destroy jobs and help almost no one. But why content yourself with a single one-note right wing think tank when you can run three of them?

Through his Center for Consumer Freedom, Berman argues against schools banning junk food and laws requiring restaurant menus to list calorie content. Through the highly abrasive Center for Union Facts, he runs newspaper ads attacking the labor movement and asserting that union leaders -- in general -- embezzle their members' dues money. His editorials, meanwhile, deride labor as a "perpetual money machine" and sound the warning that facilitating the process for employees to choose union representation could strengthen unions. And then? "Stronger unions use their greater financial strength to push the activist, liberal agenda that will elect more union-friendly legislators." They might even try to raise the minimum wage.

The libertarian Cato Institute has always toed a consistent line: America would be better off without most of the laws, regulations, and public goods we have today. The privatization of everything from schools to Social Security is part of the plan. Accordingly, Michael F. Cannon, Cato's director of Health Policy, wants you to trust free markets with your life. Cannon advocates cutting the public safety net out of health care altogether. He makes the case against "conservatives [who] have been seduced into thinking we can achieve universal coverage in a free-market way," arguing that "a free market would not provide health insurance to all; some people are uninsurable..." And with that, Cannon is off organizing the "Anti-Universal Coverage Club." That's the last we'll hear from him about the "uninsurables" -- mostly very sick people with expensive medical conditions, who certainly cannot afford to pay for the care they need out-of-pocket -- because those of us who think that sick people ought to have access to medical care are "lefties and rent-seeking weasels." But Cannon needn't worry: while millions of Americans are still without adequate health coverage, and medical expenses are a leading contributor to personal bankruptcy, they're not feeling the squeeze at Cato, which declared assets of well over $22 million last year.

Observers from across the political spectrum have noted that a college education is out of reach for the majority of Americans. Most people have the soaring cost of tuition in mind when they say this. But Charles Murray, author of The Bell Curve and now a fellow at the American Enterprise Institute (2006 net assets: $69 million), is talking about IQ. While experts on human intelligence are still debating the worth of IQ tests, with some arguing that the tests only measure the ability to take the test itself, Murray is eager to stake the educational future of America on it. To his mind, IQ tests prove that most Americans are too stupid for college. "It makes sense for only about 15 percent of the population -- 25 percent, if one stretches it -- to get a college education. And yet more than 45 percent of recent high school graduates enroll in four-year colleges... Government policy contributes to the problem by making college scholarships and loans too easy to get." You heard it from American Enterprise first, ladies and Gentlemen: too many Americans are getting a college degree. Let's get to work cutting those lousy scholarships.
Posted by Alex Constantine at 10:53 AM