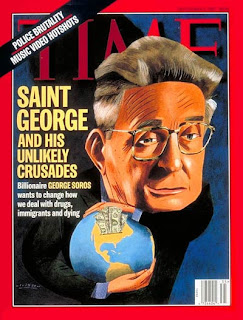 George Soros is often accused by LaRouchians and the Fox News Right of collaborating with the Nazis. Soros was 14 years old at the time, so he couldn't possibly have colluded with the Hitler regime to the extent that, say, both sides of the Bush family did, or ITT, GM, Ford Motor Co., Standard Oil, Monsanto, Coca-Cola, etc. But these multinationals are pro-fascist and the programmed right doesn't cite them - this is the degree of hypocrisy we've come to expect from America's ultra-dumbed-down "conservatives." The case against Soros (whom I condemn for other reasons) is problematic, despite the flat certainty of Lyndon LaRouche and the rectal warts at Fox News, particularly Ann Coulter, who have an interest in disparaging liberals but have no qualms about adopting fascist views if wrapped in flags and fundamentalist religion. - AC

Comment: Conservative author Ann Coulter Coulter has claimed that investor George Soros "collaborated with the Nazis" on Fox News' "Hannity". This is not the first time she has made this allegation.

Soros was a Jewish teeenager in Hungary during the Holocaust and I far as I know many of his family members were killed. I an curious to learn how he was able to collaborate with the Nazis.

The accusation also comes from The Soros Monitor, which quotes a 60 Minutes interview that I can't track down. But supposedly, Soros said that at 14 years old he posed as the Christian godson of a man who confiscated property from the Jews in Hungary.

Well, of course I c--I could be on the other side or I could be the one from whom the thing is being taken away. But there was no sense that I shouldn't be there, because that was--well, actually, in a funny way, it's just like in markets--that if I weren't there--of course, I wasn't doing it, but somebody else would--would--would be taking it away anyhow. And it was the--whether I was there or not, I was only a spectator, the property was being taken away. So the--I had no role in taking away that property. So I had no sense of guilt. (George Soros, 60 Minutes interview transcript, December 20, 1998)

Ironically, he compared Bush to the Nazis in his book. What goes around comes around, I guess.

Comment: On Dec 20, 1998, on 60 Minutes did Steve Kroft interview George Soros where Soros, a Hungarian Jew, admitted collaborating with the Nazi's as a teenager and stated: "...I had no sense of guilt."

This may have been cited in a Martin Peretz article in the New Republic.

This is the relevant portion of the transcript (from the 20 December 1998 broadcast of 60 Minutes):

KROFT: (Voiceover) To understand the complexities and contradictions in his personality, you have to go back to the very beginning: to Budapest, where George Soros was born 68 years ago to parents who were wealthy, well-educated and Jewish.

When the Nazis occupied Budapest in 1944, George Soros' father was a successful lawyer. He lived on an island in the Danube and liked to commute to work in a rowboat. But knowing there were problems ahead for the Jews, he decided to split his family up. He bought them forged papers and he bribed a government official to take 14-year-old George Soros in and swear that he was his Christian godson. But survival carried a heavy price tag. While hundreds of thousands of Hungarian Jews were being shipped off to the death camps, George Soros accompanied his phony godfather on his appointed rounds, confiscating property from the Jews.

KROFT: (Voiceover) These are pictures from 1944 of what happened to George Soros' friends and neighbors.

(Vintage footage of women and men with bags over their shoulders walking; crowd by a train)

KROFT: (Voiceover) You're a Hungarian Jew...

KROFT: (Voiceover) ...who escaped the Holocaust...

(Vintage footage of people getting on train)

(Vintage footage of women helping each other get on train; train door closing with people in boxcar)

KROFT: (Voiceover) And you watched lots of people get shipped off to the death camps.

Mr. SOROS: Right. I was 14 years old. And I would say that that's when my character was made.

KROFT: In what way?

Mr. SOROS: That one should think ahead. One should understand and -- and anticipate events and when -- when one is threatened. It was a tremendous threat of evil. I mean, it was a -- a very personal experience of evil.

KROFT: My understanding is that you went out with this protector of yours who swore that you were his adopted godson.

KROFT: Went out, in fact, and helped in the confiscation of property from the Jews.

KROFT: I mean, that's -- that sounds like an experience that would send lots of people to the psychiatric couch for many, many years. Was it difficult?

KROFT: No feeling of guilt?

KROFT: For example that, 'I'm Jewish and here I am, watching these people go. I could just as easily be there. I should be there.' None of that?

Mr. SOROS: Well, of course I c -- I could be on the other side or I could be the one from whom the thing is being taken away. But there was no sense that I shouldn't be there, because that was -- well, actually, in a funny way, it's just like in markets -- that if I weren't there -- of course, I wasn't doing it, but somebody else would -- would -- would be taking it away anyhow. And it was the -- whether I was there or not, I was only a spectator, the property was being taken away. So the -- I had no role in taking away that property. So I had no sense of guilt.

There's no reason he should feel guilt. He was 14 years old, for Pete's sake.

And for Coulter to twist this story into Soros being a "collaborator" is -- well, it's just the sort of foul nonsense I've come to expect from her.

It is not generally well-known, but there were Jews who for one reasons or another, collaborated with the Nazis.

There were the ghetto police who helped round up Jews, and load them onto the trains. There were the Judenrats, who on the Nazis orders, drew up the lists of people to be deported

In Berlin, there were Jews, who for their lives and freedom, would walk the streets, seeking out other Jews who had gone underground and were living under false identities. If fugitive Jews were found, they were turned in.

Quote:
Originally Posted by catty5nutz
It is not generally well-known, but there were Jews who for one reasons or another, collaborated with the Nazis.

It's generally unknown if you don't read about the subject.

Plus, this was hardly limited to Jews. Read this, and you will probably conclude that the number of non-Jews forced to help Nazi war criminals, such as by digging massing graves, and even piling dirt on top of the dead and wounded, was greater. Also, the non-Jews described in the previous link (who I consider victims themselves more than perpetrators), knew for sure that they were working on a mass death project, whereas there could be hope that those being deported from ghettos would survive the war where they were being sent (as some did).

According to the only real source we have for anything honorable or dishonorable the teenage George Soros did during the war -- Soros himself -- he, like many others, used forced collaboration activities to frustrate Nazi aims:

The Jewish Council asked the little kids to hand out the deportation notices. I was told to go to the Jewish Council. And there I was given these small slips of paper...It said report to the rabbi seminary at 9 a.m....And I was given this list of names. I took this piece of paper to my father. He instantly recognized it. This was a list of Hungarian Jewish lawyers. He said, "You deliver the slips of paper and tell the people that if they report they will be deported."

Jews didn't assist Nazis war criminals any more than other civilians under Nazi occupation, probably less. And the main reason they did it was to save lives -- their own, and, often, those of others.

Another good book to read is The Avengers. You will see that Jews who tried to save other Jews with halfway collaboration (seems to be where Soros fit) sometimes argued with Jewish partisans over whether it was better to fight or to wheedle. There was no good answer, which is why it's a nasty smear to call Soros a collaborator.

Yeah, I'm hardly going to blame anyone, least of all a 14-year-old kid, for doing what he had to do to stay alive. If it could be shown that he was actually betraying others, turning them over to the Nazis to save his own skin, that would be different, but it doesn't sound like that was the case. Calling him a "collaborator" is a ludicrous exaggeration -- but then, it's Ann Coulter, so it's pretty much par for the course. She'd probably have called Simon Wiesenthal a Nazi collaborator if he'd written a check to the Democratic Party at some point.

http://message.snopes.com/showthread.php?t=43876
Posted by Alex Constantine at 8:53 AM