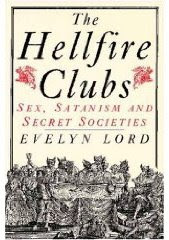 In gentlemen's clubs today, spoons are for pudding. In the 18th century it was different...

The 18th-century penchant for secret societies, which accompanied the Age of Enlightenment, resulted in a stream of speculation by those excluded: what precisely went on behind those closed doors, particularly those that were most privileged? The scandalmongers let their imaginations run as rampant as they assumed the goings-on inside to be. But what was really taking place, in the minds and with the genitals of the participants?

The brevity of this book (the main body of which, once the blank pages between chapters are removed, comprises just 200 pages) betrays the author's conclusion: in reality, there is not very much to report. Repeatedly, and honestly, Evelyn Lord admits that, despite all the frenzied fascination, the slurs and the frisson of guilty pleasure at imagining the very worst, there simply is little real evidence of Devil worship, sexual deviance, and unrestrained debauchery. Lord states early on that: "The aim of this book is to demythologise the hell-fire clubs, and to sift fact from fiction." This she does, in the process revealing that human nature changes hardly at all, and that the reputation of immoral goings-on in these clubs and societies has, in large part, been inflated.

So what is the reason behind this myth? It's simple, according to the author: salacious behaviour, especially among the high-born, has long kept the British scandalmonger in business. Where it does not exist, it can at least be assumed; and, in the absence of evidence, crudely embellished.

The author takes a chronological approach, touching on trends of unruly private behaviour by public individuals stretching back to the 16th century. She could, of course, have chosen any date from history as her initial reference point: has there ever been a time when power and corruption were not willing bedfellows?

We are soon introduced to the Duke of Wharton, who in the early 18th century was assumed to be the prime mover behind the Hell-Fire Club, a group of "high-born Devil-worshippers who mocked the established Church and religion, and allegedly supped with Satan". Certainly, Wharton was hardly unique among his contemporaries: his political and religious allegiances were fluid and self-interested. The duke dabbled in various pools of immorality, but he also flirted with Catholicism and Jacobitism. He died young, his link to the Hell-Fire Club unproven, and he is not much of a figure on whom to hang so much of this book.

Sir Francis Dashwood is another who is closely examined. He clearly had a great interest in sex: his gardens at West Wycombe focused on a Temple of Venus, with shrubs planted in the shape of a woman's pubic triangle, "with an opening beneath, allegedly representing the vagina". He and the rest of his club, who called themselves the Medmenham Friars, rather than being devoted Satan-worshippers, enjoyed dressing up, and drinking far too much. Sir Francis emerges as definitely sexually curious, probably quite promiscuous, but otherwise as a steady old cove, a devoted husband, a pillar of the Establishment; Tory, Anglican and earnest.

Just when the book is getting repetitive, in its debunking of naughty myths, the Scots ride to the rescue. The Beggar's Benison was a club of professional men based in Fife, whose initiation ceremony involved the prospective member, as it were, placing his erect penis under a cloth, on the "test platter". According to Lord, "All the other members touched his penis with theirs, and this was followed by the test of masturbation." Some test: he had to fill a "horn spoonful". Modern-day candidates for White's or Brooks's may blanch at this, and consider that they get off pretty lightly.

Another bizarre body from north of the border was the Wig Club. Edinburgh-based, and comprised largely of gambling aristocrats, its ceremonies centred around a wig that was allegedly woven from the pubic hair of a century of royal mistresses. The members took it in turns to kiss or wear this, while sipping from a glass shaped like a penis. Rather than hilarity or embarrassment, Victorian morality sounded the death knell of the Wig Club.

The 18th century was, Lord explains, a time of sexual prurience, fed by the spread of erotic and obscene books and pamphlets. There was much mystery about the female form, and fear of women's libido. Such concerns coincided with an appetite, fed by the Enlightenment, for clubs, and the belief that "sociability was a key to happiness". Many of these clubs were private, and few left records that were self-incriminating. Lord sifts through the scant evidence, and concludes that the real culprits in the tales of evil doing were the hypocrites who peddled fanciful notions of what others were up to. "Plus ça change," as Max Mosley might say – although, presumably, he would do so in guttural German...

Alex,
I enjoyed reading your thoughts on this book. I have yet to read it, though I'm hoping to start soon.
I found another post on Peterman's Eye about this book as well. I enjoyed reading it, and thought you might too.