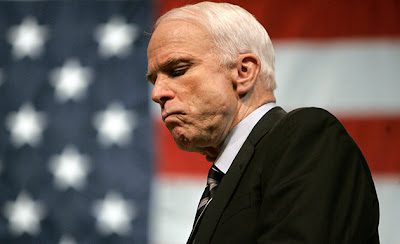 " ... 'His campaign is run by lobbyists that represent Georgia and other countries,' New Mexico Gov. Bill Richardson (D) said on ABC's This Week ... "

The presidential campaign veered Sunday into a discussion about the escalating conflict between Georgia and Russia, with a supporter of Sen. Barack Obama suggesting that Sen. John McCain's criticism of Russia stems from his campaign's connections to Georgian political leadership.

"His campaign is run by lobbyists that represent Georgia and other countries," New Mexico Gov. Bill Richardson (D) said on ABC's This Week, a clear reference to Randy Scheunemann, McCain's foreign policy adviser, who has been a registered lobbyist in Washington for the Tbilisi government.

That drew a sharp response from Louisiana Gov. Bobby Jindal (R), reported to be under consideration as a McCain running mate. He said it was wrong for the Obama campaign to focus on any ties between members of the McCain campaign and the Georgian government.

Georgia is "an example of Senator McCain's push to spread democracy in that part of the world as a very important advance of America's interest," Jindal said on ABC. "I wish Senator Obama had actually confronted the issue, not trying to detract our attention by focusing on a McCain adviser."

The two countries clashed after Georgia tried to reassert control over a separatist province on Friday. Russia launched airstrikes and mobilized tanks, and quickly ramped up its attack. A senior U.S. official called the Russian response disproportionate to the Georgian action.

McCain immediately called on Russia to stop its incursion into Georgia, while Obama took a more cautious approach advocating restraint on both sides.

Jindal said the conflict underscores why a president with deep experience in international affairs is important.

"I think this is another example, during these uncertain times, where we need experienced leadership. We need someone like Senator McCain who will take a stronger view, a more experienced view when it comes to international security and protecting America's interest," Jindal said.

Richardson, who ran for president himself this year and was a top diplomat in Bill Clinton's administration, said McCain's approach was typical of the Bush administration.

"What Senator McCain wants to do is continue the Bush policies of trying to isolate Russia. ... It's not working," Richardson said. ...

In a speech before the United Nations last month, Georgian President Mikheil Saakashvili implored world leaders to set up an international investigation to find out the truth about the war in South Ossetia.

I couldn't agree more. But I think the results of an honest investigation would reveal a very different "truth" than what President Saakashvili claims.

I know this because I was in Tskhinvali, the capital of South Ossetia, on Aug. 7 when Georgian troops marched into the city and killed my friends and neighbors. I huddled with my family in terror for three nights while Saakashvili's tanks and rockets destroyed hundreds of our homes, desecrated cemeteries, gutted schools and hospitals.