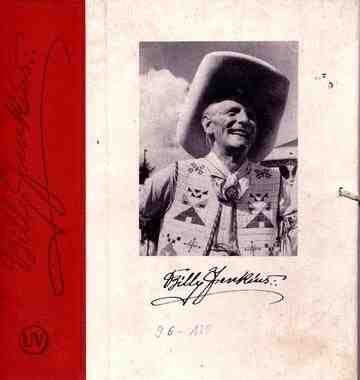 The photograph is bizarre and disturbing: A broadly grinning middle-aged man, dressed in full cowboy regalia, strides across a stage. In one hand, he brandishes a wide-brimmed cowboy hat; in the other, he holds aloft a big Nazi swastika topped by an eagle spreading its wings.

The man in the picture was known as Billy Jenkins. Born in 1885, he was a German stage performer who, dubbed “Der Koenig der Cowboys” — “The King of the Cowboys” — was the prewar toast of Germany and other European countries, with a homegrown Wild West show featuring trick ropin’, sharp shootin’ and trained birds of prey. In addition, though he never set foot in the United States, he “starred” in dozens of cowboy pulp adventure tales with such titles as “Der Goldene Sattel,” “Texasfieber,” “Aufruhr in Laredo” and “Der Letzte Schuss.”

The photo of Jenkins happily carrying the swastika dates from 1938 and, in one corner, bears his autograph and the handwritten words “Heil Hitler.” The image, and signature, becomes more disturbing than bizarre when you learn that Jenkins was born Erich Rudolf Otto Rosenthal and that his father was a Jew — a café owner and variety-show artist who performed under the stage name Georg Süssmilch. Jenkins’s strange life as a German, half-Jewish, Nazi cowboy is detailed in an exhibition on Jenkins now detailed at the local museum in Reinickendorf, a district in northern Berlin where Jenkins spent much of his life and even set up a sort of Teutonic dude ranch in his garden.

It’s easy, perhaps, to dismiss Jenkins as a classic self-hating Jew (or half-Jew) who rejected his origins in order to survive. But he became “Billy Jenkins” more than two decades before the Nazis came to power, and his experience of personal reinvention fits well within the framework of how people create “real imaginary” spaces and identities, built on dense layers of yearning and desire; how they seek and sometimes find what Italians call the “patria dell’ anima,” or “homeland of the soul,” and how they may adopt the trappings of a myth to create something that to them becomes real.

As what the Nazi regime classed as a “Mischling,” or “mixed blood,” Jenkins was not subject to the roster of restrictions placed on “full” Jews in the 1930s.

Like other Germans of Jewish extraction, however, he sought to erase, or at least conceal, his Jewish origins — and took extreme measures to do so. According to Jenkins’s biographer, Michael Zaremba, Jenkins’s disdain for his father seemed focused on his Jewishness, boiling over into “extreme antisemitic invective” expressed in Jenkins’s personal letters.

“Jenkins hated his father, who died in 1932,” Zaremba told me recently as he guided me through the exhibit. “Jenkins joined the Nazi Party in 1933 and then changed his name from Rosenthal to Fischer, his non-Jewish mother’s maiden name. He had ‘Aryan’ identity papers and some sort of [official] protection — and he had blue eyes and looked like a German hero.”

Jenkins, in fact, remained active as a performer during the first years of World War II. In 1940, he and his Wild West show even toured Nazi-occupied Poland with a German circus, playing in Warsaw, Krakow, Kielce and other towns. The tour was cut short in Lodz — which the Nazis renamed Litzmannstadt — when an explosion and fire ripped through the circus-train carriage that housed Jenkins’s trained birds. Jenkins was seriously injured trying to rescue them. Rumor had it that anti-Nazi partisans set the fire.

In 1943, however, Jenkins and his Jewish companion and stage partner, Frieda Schoenmann, seem to have had to go into hiding. Zaremba was unclear about the circumstances, but the couple, he said, survived the last years of the war in Nuremberg, concealed by friends. These experiences apparently wrought a turnaround in Jenkins’s attitude toward his identity, forcing him to reconnect with his Jewish roots — and even with his original name.

It is telling, perhaps, that his first professional appearance after the war was at a Purim party for the Jewish community in the town of Hof, in 1946 — under the name Jenkins Rosenthal. A photograph from that night shows him and Schoenmann wearing cowboy hats and other elaborate Wild West costume pieces, performing against the backdrop of two big Stars of David.

The exhibit separates, as Zaremba put it, Billy Jenkins the man and stage performer from the parallel figure of Billy Jenkins the fictional hero, and it vividly highlights multiple layers of fantasy, invention and reinvention. Photographs, documents, posters, advertisements and such artifacts as his embroidered cowboy vest document Jenkins’s career as a successful artist and Wild West showman, and they also show how he appears to have adapted a “Wild West” lifestyle to suit the suburbs of Berlin.

As early as 1913, a poster for a tour of Vienna, Prague and Budapest heralded Jenkins as an expert at sharp-shooting, roping and bullwhip tricks. His, it proclaims, was the “greatest show in existence in American cowboy revelries.” Photographs from the 1930s show Jenkins and friends wearing Stetsons and lounging in his garden amid tepees and totem poles; in a fuzzy film clip he entertains them by spinning a lasso, while a couple in the background embraces.

Also on show, however, are the dozens of pulp publications that feature Jenkins as their hero. Told in the first person, the tales are stirring sagas of good vs. evil that starred Jenkins as everything from a sheriff to an undercover G-man, battling bandits, forgers, smugglers and the like, often with a Native American sidekick called Hunting Wolf.

The Nazi regime banned the Jenkins books in 1939 — not because of Jenkins’s Jewish roots but because the hero of the stories bore an American-sounding name. Publication resumed after the war, and Billy Jenkins’s adventures continued to appear until 1963, nearly a decade after Jenkins’s death in 1954.

Jenkins was clearly influenced by Wild West mythmakers of a slightly earlier generation, most notably Buffalo Bill Cody, who toured with his Wild West show all over Europe in the late 19th and early 20th centuries and also starred in pulp adventures that amalgamated the man and the myth.

He also seems to have taken a cue from Karl May, the German author of wildly popular Western adventure tales. May, who died in 1912, created Europe’s most enduring Wild West heroes, the Apache chief Winnetou and his German blood brother, “Old Shatterhand.” May dressed in buckskins at times, and he claimed to have experienced the adventures he described. In reality, however, he had never set foot in the American West. His detailed adventure stories were “imaginary journeys” — documented until the end of this month in a fascinating exhibition at Berlin’s Deutsches Historisches Museum (German History Museum).

Jenkins, too, never visited the American West, or even the United States. Instead, he created his own America, based on his own dreams and on the dreams of his fans.

Walter Fuchs, a German writer and expert on country music who resides in the southwest town of Bühl, was a teenager when World War II ended. He clearly remembers the excitement he found within the lurid covers of a Billy Jenkins pulp.

“We bought these little magazines each time they came out, and on the back cover you found that picture of Billy with an eagle on his arm and that big Stetson hat,” he recalled. “First we thought he was an American cowboy, but rumor said he was German and lived in Berlin. We were a bit disappointed, but anyway the stories were great.”

Like most Germans, Fuchs had grown up reading May’s stories. “But May was not easy to read, because at the start you have to go through 10 or even 30 pages until something happens,” he recollected. “With Jenkins, you were smack-dab in the middle of an exciting story.”

For Jenkins, Zaremba wrote in a catalog of the Cowboy From Berlin exhibit: “The circus, the world of adventure and the dime novel were his means of transforming the sadness of everyday experience into a magical world: Billy Jenkins, the mythical Man of the West, and Erich Rosenthal, concerned with fame and fortune, are two realities whose contrast a tolerant spirit can endure.”