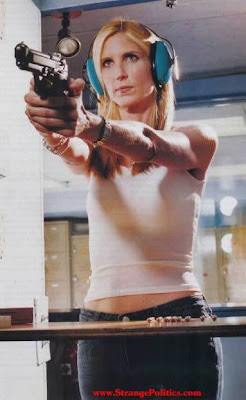 Ann Coulter Slammed for 'Joke' About 'Klan-Related Murdering'
By E&P Staff
May 02, 2008

Here's what Coulter wrote when discussing the Rev. Jeremiah Wright, Obama's former pastor, in her April 30 column: "Wright said it [the U.S.] is a country 'where I can worship God on Sunday morning wearing a black clergy robe and kill others on Sunday evening wearing a white Klan robe.' (Unless, like me, you do all your Klan-related murdering on 'casual Fridays.')"

Huffington Post blogger Jeffrey Feldman decried Coulter's Klan remark, and wondered why CNN had her on as a guest yesterday. "I mean ... why is it that a pundit who jokes about lynching blacks is allowed to appear on the largest broadcast platform in America?," he wrote.

In her April 2 column last month, Coulter compared Obama's first autobiography to Adolf Hitler's "Mein Kampf." And, in the past, she has joked about the killing of liberal Supreme Court Justice John Paul Stevens, other liberals, newspaper people, Arabs, and Muslims.
E&P Staff (letters@editorandpublisher.com)

http://www.editorandpublisher.com/eandp/news/article_display.jsp?vnu_content_id=1003798098
Posted by Alex Constantine at 10:41 AM