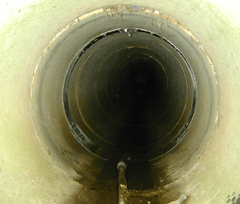 DAYTON, Ohio -- The hustle and bustle of the city is just feet away from this place. You've driven by it, walked near it, even used it—but the sights and sounds of the city are silent in this place that lies beneath the city of Dayton. The place is Dayton's 800-mile long underground storm sewer tunnel system.

News Center 7 spoke with several homeless people who said they go into the tunnels to sleep, especially during the frigid winter. One homeless man said he brings his own light and blanket. He described the tunnels as Dayton's underworld—a city under a city.

News Center 7 and whiotv.com were given unprecedented access to obtain exclusive video inside the large storm sewer tunnels. Some portions, too dangerous to enter, were videotaped by Dayton sewer workers. One section is so large they call it "the gymnasium." It's enormous enough to play basketball in it, and big enough to drive a truck through it.

One homeless man who spoke anonymously said, "I've walked back in there a quarter of a mile. It gets really dark in there, you can't see, you fear for your life, you never know what might come up out of that tunnel." We found rats scurrying on the tunnel floor, but it's surprisingly clean, cool, and quiet.

A homeless woman, who also wanted to remain anonymous, has been in the tunnels too. "I sleep in there. I lay the cardboard down, build it like a house and sleep in it." The woman said she has seen rapes occur, and witnessed drug abuse. Another homeless man said it can be violent. He said, "If the criminals don't get you, the water will."

One sewer worker who escorted us in to one large storm tunnel said, "If there was a sudden shower, this pipe would fill up fast, and you'd be washed into the river and gone."

The tunnels aren't just shelter for the homeless. David Williams, a retired Dayton police lieutenant, who is a nationally recognized expert on the occult and gangs, believes something sinister occurred in the tunnels on October 13, 1994.

That night, 26 year old Phillip Gall boarded an RTA bus near Huffman Avenue and Seminary Avenue and headed towards downtown Dayton, to cool off after a fight with his wife. Williams said the RTA bus driver told police back then that Gall stepped off the bus near what used to be the Asylum night club on South Main Street in Dayton. There has been no sighting or sign of Phillip Gall ever since.

Williams said went undercover inside the club in 1994. He said the club attracted a large, gothic, vampire-like crowd. Williams said a club bartender came forward with a horrific tale. "The story was that Gall was supposed to have been involved in an occult ritual in the upper floors of the bar and then was beheaded, and that head was sold as a relic for the occultist involved."

Williams said the witness gave intricate details, which made him believable to seasoned detectives. "He (the bartender) said that he saw the head, transferred in the bar, for sale." Williams said the witness claimed Gall's body was placed in the storm sewer tunnels, through an opening, accessible inside the club. To try and prove it, Dave and other officers drove golf carts into the tunnels. Williams said, "I can't say for sure but we think we found some that were reasonably accessible." Williams said he did find occult markings, but did not find Phillip Gall or evidence of a crime.

Kathy Gall, Phillip's mother, still hopes for answers today. "It's almost as if he vanished off the face of the earth," Kathy Gall said.

The State of Ohio declared Phillip Gall dead in 2002. The story of what might have happened to him is known by the homeless who sleep in the large storm sewer tunnels where Gall may have been placed. A homeless man we spoke to said, "I just heard some crazy stuff was going on down there. I went down there to find out, and ran in to some older guys down there drinking and they gave me the whole story."

The same homeless man said it's not just the homeless entering the tunnels. He said he's seen University of Dayton students in the tunnels partying.

Williams and sewer workers told us students could make a deadly mistake going into the tunnels. David Williams said, "There's no doubt in my mind you could get lost in there, and be lost for a long, long time." As a precaution, whiotv.com is not disclosing the entrances to these tunnels.