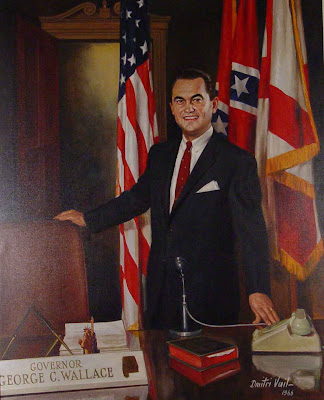 From: "Life with Kennedy: Never dull"
Politico.com
By ANDREW GLASS
5/22/08

... Not surprisingly, most of the old Southern Senate Democratic bulls, all of whom are gone now, cordially detested Kennedy for both his (then) anything-goes lifestyle and his unabashed liberalism.

Still, in 1962, he agreed, for somewhat murky reasons, to have an early dinner with his ideological nemesis, Democratic Alabama Gov. George Wallace, in the governor’s official Montgomery mansion. I went along for the ride on his small jet to cover his speech later that evening at Auburn for The Atlanta Constitution.

What public policy positions, I wondered, could Kennedy and Wallace possibly have in common? The answer, it turned out, was precious few. One by one, Wallace introduced to Kennedy his African-American staff members — all of whom, it turned out, were trustees serving long prison sentences for serious crimes. The governor then insisted the trustees explain to Kennedy the lurid details of their offenses. To say the least, their extended exchanges with the senator made for quite an unusual conversation. ...