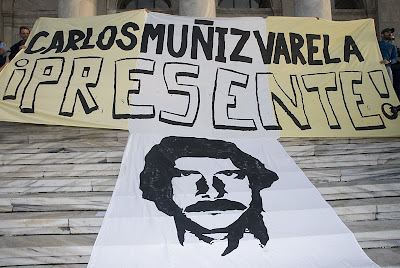 " ... April 28th commemorates the 29th anniversary of the assassination of Cuban-born Carlos Muñiz Varela in San Juan, Puerto Rico, by the hands of terrorists protected in southern Florida along with other assassins by the US government. ... "

The paradox of the issue is grotesque: The George W. Bush administration which has boasted of its so called fight against international terrorism yet continues to protect those assassins of the young Cuban in the streets of San Juan.

In 1962, when he was a child, Carlitos left Cuba with his mother and sister, under the evil influence of the US propaganda against the island.

At 26 years of age, the blows of the reality of the emigration had clarified the reasons for the close ties with his place of birth. With this desire, Carlos traveled to Havana as part of the Executive Committee of the Family Reunification Operation or Group of 75 where he actively worked and headed the Viajes Varadero Travel Agency in Puerto Rico.

By then the name of Carlos Muñez Varela, alongside other Cuban emigrants, was already on the death list made up by elements in the service of the Central Intelligence Agency, CIA.

Around 5:45pm Saturday the 28th, while driving his car along California Street in San Juan, a shot was fired at him from a car that drove alongside his. Carlos was seriously wounded and hours later died in the hospital.

Declassified documents linked Reinol Rodriguez, holder then of large amounts of weapons and explosives,d and Pedro Remón, both veterans of the anti Cuban terrorist group CORU, with the assassination of the young Cuban in Puerto Rico, without the police ever acting on the incident.

Five months before the assassination, the La Crónica daily, published a warning about the crime in the name of a concealed terrorist who called himself Zeta. He was military chief of Omega 7 Commando, which is a group of assassins like many others organized and financed by the CIA.

On June 26th, 1984, special FBI agent, Diader Rosario, referred to an interview carried out in prison in Tunas, Texas with convict Ernesto Abraham Arzola Martinez, former agent of the Puerto Rican police who declared that the assassination against Muñiz was planned by Nicolás Nogueras and Julito Labatud.

The same corrupt policeman said that he was with the terrorists in the Metropol restaurant two months before the crime and affirmed that the price of the contract to kill Muñiz Varela had been $25,000 dollars.

Another two people were also killed after Carlos Muñiz: Eulalio Negrin, a Cuban resident in New Jersey and member of the Committee of 75, on November 25th, 1979 and Felix Garcia Rodriguez, a Cuban diplomat in front of the UN on September 11th, 1980.

Pedro Remón is the perpetrator of both crimes.

The financiers and executors, the suspects and the self confessed terrorists, all continue at liberty. The paradox is that in September 1998 the FBI, instead of proceeding against the known terrorists, arrested five Cubans who had offered information on the criminal activities that anti Cuban elements based in Miami were organizing and executing.

Meanwhile, the assassins of Carlos Muñiz Varela and the other Cubans are enjoying themselves in the same warren as terrorists Luis Posada Carriles and Orlando Bosch, intellectual authors of the bombing of a Cubana airliner in 1976, killing the 73 innocent people on board. All these shady characters and terrorists are friends and accomplices of the countdown president, George W. Bush.