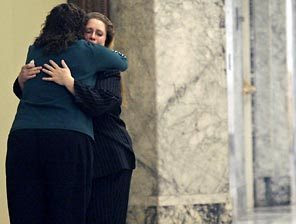 " ... was [Naveed Haq's] rampage at the Jewish Federation, which left five women wounded and one dead, an act of insanity fueled by manic psychosis and hallucinations that God was talking to him? Was he, as the defense contends, not guilty by reason of insanity? ...

" ... his actions the day of the shootings were part of a mission from God. ... Haq did state during an interview that 'It was like something had taken hold of me, some other force, on my hand, on my body, on my brain. ... '
"
•••••••
From "Haq's mother testifies Jewish Federation shooter 'was very sick'"
By Christine Clarridge
Seattle Times staff reporter

... According to Nahida Haq, her son had left their Tri-Cities home and gone off to college with a grade-point average of 3.8 and made the dean's list his first year.

But during his second year at Rensselaer Polytechnic Institute in Troy, N.Y., his behavior began to unravel, she said. He became too depressed to concentrate on his studies and returned home for a few months.

He then enrolled at the University of Pennsylvania's accelerated dental program, and while there became convinced that others had control of his body and were making him do things he didn't want to do, she said.

He began whispering on the phone, she said, because he was convinced people were listening in on him. ...

She testified that over the years her son was able to earn a degree in electrical engineering at the Washington State University campus in the Tri-Cities but was unable to find a job in his field. ...

According to police and witnesses, Haq, who is of Pakistani descent, made anti-Semitic statements before and during the slayings.

Haq's mother testified Wednesday that she had never heard her son make racist or anti-Semitic statements.

He was angry, awkward, depressed. He had teenage acne, was embarrassed about being short and unemployed. He was suspicious of everyone.

This much the experts agree on.

But did he really hear God? Was he bipolar — or was it schizoaffective disorder? Did he know what he was doing when he burst into the Jewish Federation of Greater Seattle and opened fire?

As the murder trial of accused shooter Naveed Haq moves through its final and most critical phase, a King County Superior Court jury will soon begin to solve the puzzle that is at the heart of this unusual case:

Was Haq a social misfit, plagued by a bad childhood, overbearing parents and garden-variety depression that led him to gun down six women in a suicide mission on July 28, 2006?

Or was his rampage at the Jewish Federation, which left five women wounded and one dead, an act of insanity fueled by manic psychosis and hallucinations that God was talking to him? Was he, as the defense contends, not guilty by reason of insanity?

Over the past five weeks, emotional testimony has flowed from the victims of the shooting and Haq's family, the latter revealing Haq's years-long effort to fit in, his troubles holding a job, his medication trials and errors, and his words and actions the day he stormed the federation. But it is the testimony of two mental-health professionals — whose opinions clash mightily — that will in large part determine what jurors come to believe about Haq's sanity and, therefore, about his guilt or innocence.

When testimony concludes, which could happen Thursday, it will be up to jurors to sort through the experts' conflicting opinions, which came from thousands of pages of medical records and notes mostly based on interviews with Haq.

Then they will have to answer several key questions.

To find Haq guilty of aggravated first-degree murder, the most serious charge he faces, they will have to agree unanimously that he killed federation employee Pamela Waechter with premeditated intent. Jurors will also be able to consider the lesser crime of second-degree murder, as well as second-degree attempted murder as opposed to first-degree attempted murder as charged.

To find Haq not guilty by reason of insanity, which would result in commitment to a mental hospital, the jury must find that at the time of the shootings, as a result of mental disease or defect, Haq was unable to perceive the nature and quality of the act with which he is charged; or that he was unable to tell right from wrong with reference to that act.

Forensic psychologist J. Robert Wheeler, testifying for the prosecution, told the jury this week that in the weeks before the shooting, Haq was depressed and suicidal. He also felt a simmering anger, according to Wheeler, who interviewed Haq during the last two weeks of June 2007.

Reading from his notes, he said Haq told him, "I was very lonely. My family was always on my case. I had monetary problems. I was enraged all the time. I had no friends. This whole Jewish Federation thing was kind of an escape, you know — it was a suicide attempt.' "

But Haq showed no signs of mania — the psychotic state that defense attorneys claim Haq was in during the days before and lasting through the shootings, said Wheeler. He diagnosed Haq with schizoaffective disorder, a thought disorder.

Three days before the shootings, Haq saw a nurse and counselor in Richland, neither of whom reported any unusual or manic behaviors, both testified. Wheeler said Haq admitted later in an interview to lying to the therapist when he said he didn't have access to weapons — proof he knew right from wrong, Wheeler said.

Wheeler also contends that when Haq started the process of purchasing two handguns and a shotgun less than two weeks before the shooting, it was evidence that he could plan ahead. Wheeler also said that Haq's admission that he stopped along the way from Eastern Washington to Seattle the morning of the rampage to test-fire his guns, and his later use of the one that fired more easily, is evidence of a capacity to premeditate.

Though Haq told him about a history of delusions and hallucinations of voices calling him names, he said Haq never mentioned being directed by God to drive to, and shoot up, the federation.

"He told me, 'I just got it in my mind to do some political activism, so I just hopped in my truck. I got in my head to do a mission. On my way to the federation I decided I was going to take hostages.' "

However, while being cross-examined Tuesday by defense attorney John Carpenter, Wheeler acknowledged that Haq did state during an interview that "It was like something had taken hold of me, some other force, on my hand, on my body, on my brain."

Dr. James Missett, the defense's star witness, offered a far different view of Haq's mental state leading up to and during the shootings.

Missett, a psychiatrist, testified last week that during his last of four interviews with Haq — just three months ago — Haq mentioned for the first time that he felt his actions the day of the shootings were part of a mission from God. He said Haq told him he'd heard a voice of divine origin, "a command," and that he felt something was controlling his trigger finger inside the federation, even as he tried to stop shooting.

Missett diagnosed Haq with bipolar disorder — considered a mood or emotional disorder — though he acknowledged that a diagnosis of bipolar vs. schizoaffective disorder didn't necessarily affect whether Haq could have committed the crimes charged.

He said side effects from Haq's medications, including a thyroid drug and Effexor, an antidepressant, could have put him at greater risk for a psychotic break, but stopped short of attributing the shootings to them.

Haq's severe mental problems took root in his teen years, Missett testified, when a teacher locked him in a closet, and when he suffered from acne. In the year before the federation shootings, Haq's symptoms worsened, Missett said, and many of the behavior patterns seen in the weeks before and during the shooting emerged: aggression, sleeplessness, grandiose plans, feelings of having a "super high," delusions, racing thoughts.

Missett at times had difficulty on the stand connecting Haq's symptoms to his own opinion of insanity. At one point Missett testified that he thought Haq's capacity to form intent and premeditate was impaired "but not completely eliminated." But, Missett said, "he did not know the nature and quality of acts with which he was charged."

In a rare point of agreement with Wheeler, Missett testified that Haq didn't care much about living by the time he entered the Jewish Federation offices The days proceeding the shootings were the first times Haq couldn't control his impulses, he said. Haq was experiencing "an overwhelming sense of dread that his life had reach the point where it had come to an end."

Missett also testified that Haq's mother's observations of her son's swollen ankles, headaches and irritability in the days proceeding the attack indicate a state of mania. "He was so psychotic he couldn't tell the difference between right and wrong," Missett said.

... Haq has been diagnosed with bipolar disorder and schizoaffective disorder, according to a psychiatrist who treated him for depression and attempted suicide at the University of Pennsylvania in 1998, while he was a dental student there.

Defense witness Dr. Alexandra McLean testified out of order on Monday, but later in the day Judge Paris Kallas ruled her testimony inadmissible due to more recent diagnoses from Haq’s doctors prior to the trial.

“I diagnosed him with schizoaffective disorder,” McLean told the court about her diagnosis in 1999. “He was still angry, crying, persecuted.”

McLean also said that Haq reported being “put off” from his family, and that he felt he was pressured to attend dental school.