Paul Reyes Assassination “Made in the USA” 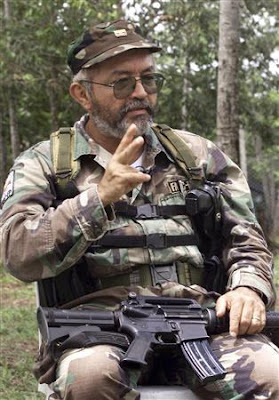 " ... on Monday, French Foreign Minister Bernard Kouchner told the media, 'It’s bad news that the man we were talking to, with whom we had contacts has been killed. Do you see how ugly the world is?' ... "

Latin American Crisis Triggered by an Assassination “Made in the USA”

... One would never guess that Washington had any role in the bloody events on the Colombian-Ecuadoran border. The Bush administration portrays itself—and is largely portrayed by a compliant media—as a selfless champion of democratic values and faithful ally of the people’s of the southern hemisphere.

The facts, however, tell another, far uglier story. The three Andean nations have been brought to the brink of war by a brutal and cold-blooded political assassination carried out to further the interests of US imperialism at the expense of the Colombian people and the population of the entire region.

The March 1 raid was carried out not to defend Colombia from terrorism, but to murder one man, Raul Reyes, considered the second-in-command of the FARC and the guerrilla movement’s principal international spokesman and diplomatic representative. He was well known in both Latin America and Europe, having served as the principal FARC negotiator in the abortive attempt under the government of President Andres Pastrana (1998-2002) to broker a peaceful settlement of the civil conflict that has wracked Colombia for more than four decades. During that same period, he met with officials of the Clinton State Department.

To carry out this political murder, air strikes were called in against the camp inside Ecuador as Reyes and some 20 of his comrades slept. Commandos were then sent into the camp to finish off most of the survivors and haul Reyes’s bloody corpse back to Colombia as a political trophy for the right-wing US-backed government of President Alvaro Uribe.

This ruthless attack was staged not to ward off some pending terrorist attack. On the contrary, it was designed as a “preemptive strike” against a negotiated release of hostages held by the FARC, among them a former presidential candidate, Ingrid Betancourt, who holds joint Colombian-French citizenship and has been held prisoner by the FARC for six years.

Just two days before the border massacre, French President Nicolas Sarkozy publicly called for the release of the ailing Betancourt and announced that he was prepared to fly to the Colombian border to personally receiver her.

The FARC itself issued a statement that Reyes had been working through Venezuelan President Chavez to concretize plans for a meeting with Sarkozy to arrange for the hand-over of Betancourt.

The French government has not denied this account. Indeed, on Monday, French Foreign Minister Bernard Kouchner told the media, “It’s bad news that the man we were talking to, with whom we had contacts has been killed. Do you see how ugly the world is?”

Meanwhile, a French deputy foreign minister confirmed the role played by Chavez in mediating the Sarkozy-FARC hostage negotiations. “President Chavez has taken the initiative, he had taken the initiative earlier on that had allowed for the release of several hostages even though the situation had been blocked for some time, so we are aware of his involvement and the important role he has played,” the minister, Rama Yade, told a news conference in Geneva.

After the news of Reyes’s assassination, the French foreign ministry issued a pointed statement to the effect that the Colombian government was well informed that France was conducting negotiations with him.

This statement was fleshed out this week by the Argentine press. Citing sources in the Argentine foreign ministry, it reported that Sarkozy had sent a delegation of three personal envoys to Colombia and that they were in the border region to meet with Reyes.

“On Saturday [the day of the cross-border raid], the three negotiators were 200 kilometers from the attack zone and were headed for a meeting with Reyes when they received a call,” the daily Pagina 12 reported. It was Luis Carlos Restrepo, head of the Colombian government’s Peace Commission, who warned them not to go to the meeting place.

US role in Reyes’s assassination
Colombian officials have openly acknowledged the role of US intelligence agencies in instigating and coordinating the March 1 targeted assassination. General Oscar Naranjo, commander of the national police told reporters it was no secret that the Colombian military-police apparatus maintained “a very strong alliance with federal agencies of the US.”

The Colombian radio network, Radio Cadena Nacional (RCN), reported Wednesday that Reyes’s location was pinpointed by US intelligence as a result of monitoring a satellite phone call between the FARC leader and Venezuelan President Chavez. The February 27 call—three days before the raid—came after the FARC released to Venezuelan authorities four former Colombian legislators—Gloria Polanco, Luis Eladio Perez, Orlando Beltran and Jorge Eduardo Gechem—who had been held hostage for nearly seven years.

“Chavez was thrilled by the release of the hostages, and called Reyes to tell him that everything went well,” RCN reported. Presumably, the CIA or other US intelligence agencies were also tapping phone calls between Reyes and French officials over the proposed release of Betancourt.

Another Colombian station, Noticias Uno, cited intelligence sources as saying that they had received photographs from “foreign spy planes” pinpointing the location of Reyes’s camp in Ecuador.

The Colombian police commander insisted that, while relying on US intelligence, the March 1 attack was an “autonomous operation.”

This claim is improbable to say the least. US military “trainers” are attached to the elite counterinsurgency units that would have been employed in the ground attack that finished off the survivors of the aerial bombardment.

As for the air raid itself, Ecuador’s Defense Minister Wellington Sandoval reported the attack included the use of five “smart bombs” of the type utilized by the US military. “It is a bomb that hits within a meter of where it is programmed, from high velocity airplanes,” he said. He added that to target Reyes with such weapons, “they needed equipment that Latin American armed forces do not have.”

Both Washington and the right-wing regime in Colombia were determined to stop any further hostage releases in order to further efforts to politically isolate the Chavez regime and to enforce the Bush administration’s proscription against negotiations with “terrorists.”

At the same time, the bombs dropped on the FARC encampment were undoubtedly also meant as a message to Sarkozy not to meddle in Yankee imperialism’s “backyard.” It should be recalled that the French president, shortly after his election, sent his then-wife to Libya to consummate the release of six medical workers who had been held for eight years on false charges. This political coup managed to bypass the European Union, which had been negotiating the release, and paved the way for lucrative Libyan contracts for French corporations. Washington had no intention of seeing Paris pursue a similar path in relation to Venezuela, which constitutes the fourth largest source of US oil imports.

In the final analysis, this episode in the “global war on terrorism,” which has brought three South American nations to the brink of armed conflict, is the product of a filthy political murder carried out to defend the strategic and profit interests of US capitalism.

It is a reminder that “Murder, Inc.”—as the CIA became known during the 1960s and 1970s, when it organized numerous assassinations and assassination attempts, along with right-wing coups and dirty wars—is still very much in business in Latin America.