NOTE: Max Mosely has since been "vindicated" by jury. This has engendered in myself even less respect for the jury system than I held before the trial, if possible. - AC 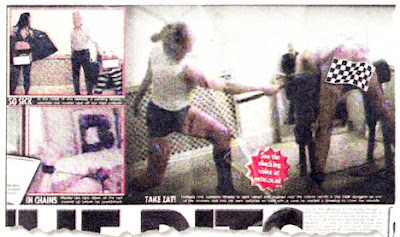 By SAM GREENHILL and BENEDICT BROGAN
Daily Mail
19th May 2008

She then sold a lurid video of their five-hour session to the News of the World newspaper, shaming Mosley and prompting calls for him to quit his post as head of motor racing.

Security sources today dismissed any suggestion that the surveillance officer was involved in the secret filming and insisted he was unaware of it until after the story broke in the newspapers. But sources close to Mosley said they wondered if the agent "might have been doing a bit of freelance work on the side".

The revelation is severely embarrassing for MI5 at a time when its agents are at full stretch fighting terrorism. The officer, who cannot be named for security reasons, is in his 40s and had several years of experience.

He previously served in the military and had responsibility for watching Al Qaida suspects, Russian spies and crime bosses. The Prime Minister and Home Secretary were both informed by Jonathan Evans, the director general of MI5, that one of his agents was caught up in the sting. He gave them a categorical assurance that MI5 was not involved in a covert operation to entrap Mosley, who is not considered a security threat.

The women were said to be wearing striped uniforms - similar to those worn by prisoners at Auschwitz - or Nazi uniforms. One was allegedly whipped with a leather strap by Mosley while he counted each blow in German.

The 68-year-old, who has been married since 1960, has defended his right to an "eccentric" sex life, not denying taking part in the romp but insisting his private life did not affect his professional role. He has accused the News of the World of a "cold-blooded lie", saying: "The Nazi aspect is completely untrue."

Today the suggestion that MI5 may have been involved was dismissed as "utter nonsense" in Whitehall. Security sources confirmed an MI5 officer had been dismissed but vehemently denied he may have used his expertise, his access to classified information or even MI5 equipment to take part in the operation against Mosley.

It is understood the officer could still face legal action if an ongoing investigation finds he breached confidentiality rules enshrined in the Official Secrets Act. Although no details were provided, it is believed the agent had to resign after admitting he had failed to disclose his wife's activities to his bosses. A detailed internal investigation has so far turned up no links between the officer and the newspaper operation.

The service is carrying out further inquiries to work out whether he divulged any secret information that his wife may have used in her work.

Sources suggested he knew his wife was a prostitute but had not known she was taking part in the sting. One said: "It appears that he knew what his wife was about, but didn't know it had led her to get involved with Max Mosley. This was his wife's activities coming home to roost."

Under the strict vetting procedures used to recruit security service staff, a relationship with a prostitute would be an immediate bar to employment because it would raise concerns about individual judgement and vulnerability to blackmail.

The MI5 director general has ordered a review of vetting procedures for the service's 3,500 staff to establish why the officer was able to keep his wife's secret hidden. A Whitehall source said: "The service does expect the highest standards of behaviour from staff at all times, both professionally and privately. We take this very seriously. In any case where there is a suspicion that people might have fallen below these standards, action will be taken."

When the story broke, Mosley claimed he had been told by a source close to the security services that his private life had been targeted "by a group specialising in such things for reasons and clients as yet unknown".

Friends of Mosley say he is desperate to know if the sting was set up by an enemy or a rival.

Private investigators from Quest, the security firm run by former Met Police Commissioner Sir John Stevens, have been recruited to find out. They do not have much time. The Oxford-educated multimillionaire faces a vote of confidence over his job as president of the FIA, the world motor racing governing body, in Paris on June 3.

He has written to FIA members urging them to back him. He was banned from the Bahrain Grand Prix last month and it has been made clear he is not welcome in an official capacity at the Monaco race next Sunday.

A Formula 1 source said: "If there is a smoking gun, the FIA will be keen to know who is holding it." Yesterday Mosley would not comment but he is reported to have said of the link to MI5: "This is an astonishing piece of information, which I will pass on to my legal advisers.

http://www.dailymail.co.uk/news/article-1020297/MI5-agents-prostitute-wife-took-Nazi-style-orgy-F1-boss-Mosley.html
Posted by Alex Constantine at 10:30 AM