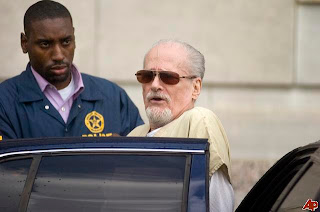 A federal judge sentenced evangelist Tony Alamo to 175 years in prison Friday following his conviction in July of 10 counts of taking underage girls across state lines for sex.

U.S. District Judge Harry Barnes imposed the maximum sentence after three women who Alamo took as child “brides” testified at Alamo’s sentencing hearing about the damage the convicted evangelist did to them and their families. Barnes indicated he took into account Alamo’s role as pastor and father figure to control the young girls.

He told Alamo that he will one day face “a greater judge,” and said “may (God) have mercy on your soul.”

Just before Barnes sentenced Alamo, the evangelist offered a brief statement to the court praising God then later adding:

“I’m glad I’m me and not the deceived people in the world.”

Alamo’s lawyers said they planned to appeal Barnes’ ruling. His defense offered a doctor who said he suffered from hardening arteries, diabetes, glaucoma and other health problems. However on cross-examination the doctor acknowledged he saw Alamo only once in 2004 and that the purpose of Alamo’s visit was to get an eye lift to make him appear younger.

The evangelist will stay in Texarkana pending a Jan. 13 hearing in which Barnes will decide whether Alamo’s victims will get restitution from him. After that hearing, Barnes said Alamo would go to a federal prison that has hospital facilities.

A woman Alamo took as a child “bride” at age 8 challenged the evangelist from the witness stand Friday to submit himself to God’s judgment. Reading from lined notebook paper, she said Alamo tore her family apart by taking her as a child bride and described how she shook uncontrollably when he first molested her.

“You preyed on innocent children,” she said staring down Alamo, who wore yellow prison scrubs and a windbreaker for the hearing.

“You have the audacity to ask for mercy. What mercy did you show us?” she said.

A moment later she asked, “What kind of man of God does what you have done?”

The woman told Barnes that she planned to become an FBI agent in order to help other child sex abuse victims.

Two other child brides testified. One, who said she is now employed full-time and has a life of her own outside of the ministry, said she hoped Alamo would spend the rest of his life in jail.

“Maybe the real God, not the God you made up, will have mercy on your soul,” the woman said.

http://www.arkansasonline.com/news/2009/nov/13/alamo-sentenced-175-years-sex-convictions/
Posted by Alex Constantine at 10:59 AM