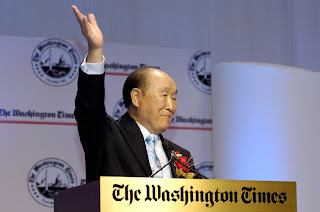 The Rev. Sun Myung Moon-owned The Washington Times fired three top executives on Monday, November 7, "amid reports that the paper's top editor might also be leaving," The New York Times reported. However, despite billion dollar losses, a series of editorial shakeups over the past few years, the tough economic climate for newspapers in general, and ownership by the controversial Moon, it doesn't appear that the paper will cease operations anytime soon.

The dismissed included Thomas P. McDevitt, the president and publisher who was a former pastor at Washington's Unification Church, Keith Cooperrider, the chief financial officer, and Dong Moon Joo, the chairman. Jonathan Slevin, a former vice president of the paper, was named acting president and publisher, and the paper retained the business consulting firm, Tatum, according to the NYT.

(In October, The Washington Times' Julia Duin reported that Moon had "turned over day-to-day control of the church and financial empire he founded to a daughter and three sons." Hyun Jin "Preston" Moon, 40, is chairman of News World Communications, the parent company of The Washington Times, United Press International, and other media properties. In addition, he leads The Washington Times Foundation.)

The newspaper also reported that the paper's executive editor, John Solomon, who came over from The Washington Post in early 2008, is weighing whether to step down.

The New York Times noted that The Washington Times "had weekday circulation of 67,148 in the six months ended Sept. 30, down 17 percent from a year earlier -- a fraction of the figures for its major competitors. But," The New York Times' Richard Perez-Pena pointed out, "as a platform for conservative opinion, it is more influential than the circulation numbers indicate and draws more than 2 million monthly readers online, according to Nielsen Online, making it one of the nation's top 20 newspaper sites."

The Washington Post's Howard Kurtz wrote that "economics appears to be at the heart of the shakeup." According to Kurtz, "The Times, established in 1982 by Unification Church head Rev. Sun Myung Moon as a politically conservative voice in the nation's capital, has always been subsidized by the church. At the paper's 20th anniversary, it was estimated by industry experts that Moon had put more than $1.7 billion into the Times. As such, the Times was largely shielded from long-term declines in readership and advertising that have hammered almost every other newspaper, causing deep cuts in coverage and staff and even forcing some papers out of business."

"It's safe to say that the conditions impacting a lot of publications have also impacted the Times, and perhaps more so," said Don Meyer of Washington's Rubin Meyer Communications, which is handling public relations for the newspaper.

TPM's Ben Frumin took a different tack in explaining the shakeup: Frumin wrote that "a new wrinkle" regarding the "staff shakeup" was that the realignment came "just one day after the paper admitted that [Jonathan] Slevin [who had been promoted to the posts of acting publisher and president of the paper] himself selected the person [Michael Scheuer, a former CIA operative and is currently an adjunct professor at Georgetown University] who wrote the paper's glowing book review of Clash of the Gods, a book [Slevin] coauthored, in violation of newspaper policy.

"The book review is a year old -- though the clarification just ran in the Sunday newspaper. And executive editor John Solomon -- who may be leaving the newspaper along with three other top executives -- hasn't been seen at the newspaper since.

"It's not clear that any fallout from this book review had anything to do with the staff shakeup. But the timing does seem a little coincidental."

Interestingly, The Washington Times recently announced that in collaboration with the Heritage Foundation and other conservative organizations, it had launched TheConservatives.com, "a Web site with technology that allows activists to talk up to ideological and party leaders and interact in innovative ways."

"TheConservatives.com creates a cutting-edge new marriage between the social publishing world of bloggers and the social networking world of Twitter, YouTube and the like," said Solomon. "Most opinion sites today enable thought-leaders to talk down to the masses, but TheConservatives.com empowers users to change the direction of that dialogue, allowing the Joe the Plumbers of the world to speak up to major thinkers, like Newt Gingrich."

"Using The Washington Times as a propagandist for the Reagan-Bush crowd, Moon sanitized himself as much as anyone could ever imagine," Robert Parry, a long-time investigative reporter who broke many of the Iran-Contra stories in the 1980s for the Associated Press and Newsweek and whose latest book is titled Secrecy & Privilege: Rise of the Bush Dynasty from Watergate to Iraq, pointed out.

"By investing smartly in the American conservative movement -- and thus gaining influential defenders of his own -- [Moon] intimidated much of the U.S. news media and U.S. government investigators from discussing his real history or looking too deeply at his curious funding methods. As a business model for a corrupt money-launderer, which is essentially what Moon's organization has been, Moon could have taught the Corleone family a thing or two."

A long-time Moon watcher told me via e-mail that while he was uncertain whether the shakeup is in any way related to internal operations within Moon's church, there have been rumors that Moon has been thinking about unloading the paper. Moon selling the paper should probably be treated about the same as his oft-spoken pledge to no longer come to America, a pledge he has violated on numerous occasions.

"There are no plans to shut the company down," Slevin told [The Washington] Times employees during a meeting Tuesday morning, the newspaper reported. "We expect The Washington Times to continue to serve its readers and viewers for years to come."

Whatever the outcome of the recent personnel changes at The Washington Times newspaper, one thing is clear; over the years, the conservative movement has gotten more than its money's worth.
------
Bill Berkowitz is a longtime observer of the conservative movement and a frequent writer for Z Magazine, Religion Dispatches and other online publications. He documents the strategies, players, institutions, victories, and defeats of the American Right from a progressive perspective
Posted by Alex Constantine at 11:37 AM