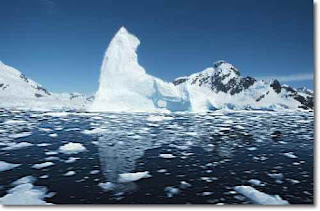 They just can't help themselves.

Take a look at today's "Midweek Briefing." Here is the middle "brief":

As the BBC's climate correspondent Paul Hudson reminds, global temperatures have not increased over the past 11 years. And he says that solar scientist Piers Corbyn is preparing to report to the international scientific community this month that solar activity is almost entirely responsible for temperature variations. Concludes Mr. Hudson: "One thing is for sure. It seems the debate about what is causing global warming is far from over."

Before we look at Hudson's reporting, let's just have a look at how Nature.com sees the BBC report:

Corbyn and Easterbrook are both global warming deniers / sceptics and both have been publicising their doubts for some time (see the references on their Wikipedia entries for more). Without commenting on the merits of their arguments, it is clear that it is slightly disingenuous to use the views of these two men to claim as the BBC does that “It seems the debate about what is causing global warming is far from over. Indeed some would say it is hotting up.”

And a little later:

And that part about how temperatures haven't increased in 11 years? Take a look:

This discussion focuses on just a short time period – starting 1998 or later – covering at most 11 years. Even under conditions of anthropogenic global warming (which would contribute a temperature rise of about 0.2 ºC over this period) a flat period or even cooling trend over such a short time span is nothing special and has happened repeatedly before (see 1987-1996). That simply is due to the fact that short-term natural variability has a similar magnitude (i.e. ~0.2 ºC) and can thus compensate for the anthropogenic effects. Of course, the warming trend keeps going up whilst natural variability just oscillates irregularly up and down, so over longer periods the warming trend wins and natural variability cancels out. 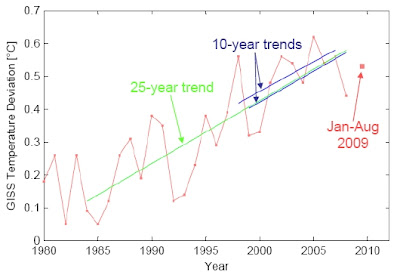 See how that works? Taken over a long period of time, the trend is clear. Taken over shorter periods it's easier to smudge the data.

Don't believe me? Right now it's cooler in my living room than it ever was this summer: THAT PROVES GLOBAL WARMING IS OVER.

It does, doesn't it?

http://2politicaljunkies.blogspot.com/2009/10/more-on-scaifes-brain-trust.html
Posted by Alex Constantine at 7:47 AM