For those who enjoy reading the output from skilled psy-ops experts, the Internet makes it easy to find. For those not careful where they get their information, they will learn that the Internet can make us dumber.

Then there is Debkafile Whatever it is they do, nobody does it better. Let’s flip through their portfolio of warnings. These are in sequence, so their latest at at the end of the list (you cannot properly appreciate it without seeing what has come before).

Debkafile, where war always looms in the foggy but near future

The war started on April 6, at least according to this Debkafile article (31 March 2007) — Excerpt:

Intelligence sources in Moscow claim to have information that a US strike against Iranian nuclear installations has been scheduled for April 6 at 0040 hours. The Russian sources say the US operation, code-named “Bite,” will last no more than 12 hours and consist of missile and aerial strikes devastating enough to set Tehran’s nuclear program several years back.

During most of last week, two high-ranking Iranian delegations spent time in Damascus. One was composed of generals who held talks with Syrian leaders on coordinated preparations for a Middle East war in the coming months.

The Khorramshar News Agency, which is published by the ethnic Arab underground of Iran’s oil-rich Khuzestan, reported early Oct. 1 that the entire staff of Russian nuclear engineers and experts employed in building the nuclear reactor at Bushehr had abruptly packed their bags Friday, Sept. 28, and flew back to Russia. The agency’s one-liner offers no source or explanation. DEBKAfile have obtained no corroboration of its report from any other source. If true, DEBKAfile can offer three hypothetical scenarios to account for the Russians’ precipitate departure:

1.Another crisis has cropped up in the patchy Russian-Iranian dealings over the Bushehr reactor. This is unlikely because …

2.Moscow or Tehran has been tipped off that a US or Israeli attack is imminent on the Bushehr plant and Iran’s other nuclear installations and acted to whip Russian personnel out of harm’s way.

3.Moscow has learned that an Iranian pre-emptive attack is imminent against American targets in Iraq and the Persian Gulf and/or Israel.

This is the message prime minister Ehud Olmert is carrying urgently to French President Nicolas Sarkozy Monday and British premier Gordon Brown Tuesday, according to DEBKAfile’s military and intelligence sources. Last week, Olmert placed the Israeli intelligence warning of an Iranian nuclear breakthrough before Russian president Vladimir Putin, while Israel’s defense minister Ehud Barak presented the updated intelligence on the advances Iran has made towards its goal of a nuclear weapon to American officials in Washington, including President Bush. Olmert will be telling Sarkozy and Brown that the moment for diplomacy or even tough sanctions has passed. Iran can only be stopped now from going all the way to its goal by direct, military action.

Information of the Iranian breakthrough prompted the latest spate of hard-hitting US statements. Sunday, Oct. 21, US vice president Cheney said: “Our country, and the entire international community, cannot stand by as a terror-supporting state fulfills its grandest ambitions.” Friday, the incoming Chairman of the Joint Chiefs of Staff, Adm. Michael Mullen said US forces are capable of operations against Iran’s nuclear facilities or other targets. At his first news conference, he said: “I don’t think we’re stretched in that regard.”

Our Washington sources report that president George W. Bush is closer than ever before to ordering a limited missile-air bombardment of the IRGC-al Qods Brigade’s installations in Iran. It is planned to target training camps and the munitions factories pumping fighters, missiles and roadside bombs to the Iraqi insurgency, Lebanese Hizballah and Palestinian terrorist groups in Gaza.

It is self-evident to every Israeli that Iran’s acquisition of a nuclear bomb would threaten the Jewish state’s existence and no government can afford to stand by and watch it happen. For Mofaz, who is campaigning to succeed Olmert as Kadima leader and next prime minister, a hawkish position on Iran has the best chance of garnering popular support.

This does not promise an attack on Iran is about to happen. So far, Olmert and Barak have been treading water on the Iran problem; they are even dragging their feet on the lingering Hamas missile offensive which is progressively depopulating southwestern Israel. 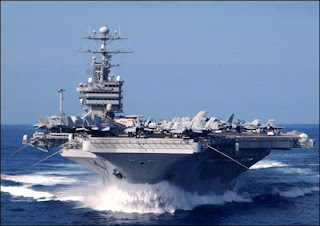 US Carriers, always on their way to attack Iran

The is an sizable group of geopolitical alarmists, whose behavior is much like those sheep that faint at the slightest scare. One story that consistently sets their pulses racing is news of US carrier movements. Since our carriers are almost always in motion, their adrenal glands get frequent exercise. Debkafile often feeds the flames of their fears, with mention of US carrier movements adding a menacing touch. Here are just a few of their “exclusive” alerts and alarms.

“The American Iwo Jima Expeditionary Strike Group joins US build-up opposite Iran“, Debkafile (30 October 2006) — Not a carrier, but makes the same point.

US aircraft carriers USS Eisenhower and USS Enterprise in the Red Sea off the Saudi Arabian coast“, Debkafile (7 November 2006) — Excerpt:

The nuclear-powered aircraft carrier USS Eisenhower, and its accompanying carrier strike group, passed through the Suez Canal on Monday, Oct. 30, and arrived in the Red Sea on Tuesday, Oct. 31.

DEBKAfile’s military sources report that the USS Eisenhower is at sea off the Saudi Arabian coast, together with another aircraft carrier, the USS Enterprise. The presence of the two US aircraft carriers, and their accompanying strike groups, in a body of water as small as the Red Sea is an extraordinary development.

… With the arrival of the USS Eisenhower in the region, there are now three US aircraft carriers in the Persion Gulf and surrounding waters, including the USS Iwo Jima. Accompanying the USS Eisenhower are the guided-missile cruiser USS Anzio, the guided-missile destroyers USS Rampage and USS Mason and the nuclear-powered fast-attack submarine USS Newport.

DEBKAfile’s military sources report that a fourth US aircraft carrier, the USS Boxer, will arrive on the scene by the beginning of next week, together with its carrier strike group.

US Vice President Dick Cheney arrived in Riyadh Sat. May 12, with a full caseload for his talks with Saudi King Abdullah bin Abdulaziz . He is seeking coordination with the Saudis in good time for the approaching winding-down of US military forces in Iraq. … Friday, aboard the USS John Stennis, one of two US air carrier strike groups deployed in Gulf waters, the vice president pledged the US would “stand with others to prevent Iran from gaining nuclear weapons and dominating this region.”

“A third US carrier, the nuclear-powered USS Enterprise Strike Group is speeding towards the Persian Gulf“, Debkafile (29 June 2007) — Excerpt:

According to DEBKAfile’s military sources, the US naval build-up off the shores of Iran marks rising military tensions in the region, accentuated by last week’s Hamas victory which has endowed Iran with a military foothold on Israel’s southwestern border.

DEBKAfile’s military sources report that from the third week of July, the only American strike force- carrier in the Persian Gulf-Arabian Sea region was the USS Enterprise. By the end of September, it will be joined by the USS Nimitz and the USS Truman Strike Groups. Our sources note that with their arrival, three American naval, air and marine forces will again confront Iranian shores at a time of crisis in the military and civilian leadership of Iran – signaled by the abrupt change of Revolutionary Guards Corps commanders, rising Israel-Syrian tensions and a troubled situation in Lebanon.

“US Gulf armada built up again amid preparations for third round of Security Council sanctions against Iran“, Debkafile (4 December 2007) — Excerpt:

DEBKAfile’s military sources report that a third aircraft carrier, the USS Harry S. Truman , arrived in the Central Command area over the weekend to join the USS Enterprise and USS Nimitz . All three head mighty strike groups of assorted warships, aircraft, marine forces, amphibious craft and nuclear submarines. Our sources interpret the new build-up as signifying US preparedness for a possible military confrontation with Iran.

Another nuclear aircraft carrier, the USS Abraham Lincoln, will soon set out for the region from the South China Sea, along with two more US naval strike forces: the USS Kitty Hawk and the USS Nimitz attended by strike groups.

“Three major US naval strike forces due this week in Persian Gulf“, 12 August 2008 — Disturbing news! Or rather it would be, except that the USS Theodore Roosevelt is docked at Norfolk. Excerpt:

DEBKAfile’s military sources note that the arrival of the three new American flotillas will raise to five the number of US strike forces in Middle East waters – an unprecedented build-up since the crisis erupted over Iran’s nuclear program.

This vast naval and air strength consists of more than 40 carriers, warships and submarines, some of the last nuclear-armed, opposite the Islamic Republic, a concentration last seen just before the US-led invasion of Iraq in 2003.

… DEBKAfile’s military sources name the three US strike forces en route to the Gulf as the USS Theodore Roosevelt , the USS Ronald Reagan and the USS Iwo Jima . Already in place are the USS Abraham Lincoln in the Arabian Sea opposite Iranian shores and the USS Peleliu which is cruising in the Red Sea and Gulf of Aden.

“Arab world fears an Iran war may be impending“, Debkafile, 18 August 2008 — Debkafile sticks by their story, despite the fact that the Roosevelt is still docked at Norfolk. Excerpt:

The scare was fed by the impending arrival of the USS Theodore Roosevelt, the USS Ronald Reagan, and the USS Iwo Jima in the Persian Gulf to reinforce the US strike forces in the region, as first revealed by DEBKAfile on August 11. They are to join the USS Abraham Lincoln, which is patrolling the Arabian Sea opposite Iran, and the USS Peleliu, on beat in the Red Sea and Gulf of Aden. This deployment would be the largest naval task force the US and its allies had massed in the region since the 1991 Gulf War.

A US Pentagon spokesman last week denied that these forces were gathering to impose a partial naval blockade on Iran, but declined to disclose their mission. The denial apparently failed to convince the rulers of Saudi Arabia, Egypt and Kuwait.

2.Will Israel commit suicide? More rumors of a strike at Iran (22 December 2007)

3.A new story about a possible war with Iran (21 May 2008) — About the 20 May Jerusalem Post story, originally reported by Army Radio.

5.“Attacking Iran, in order to stop its nuclear plans, will be unavoidable” (8 June 2008) — War-talk by a former Defense Minster of Israel.

6.Der Spiegel: “Israeli Ministers Mull Plans for Military Strike against Iran” (17 June 2008) — Rumors in Der Spiegel of a strike by Israel on Iran.

8.Leaks about a possible strike at Iran (are there any hotter issues today?) (7 July 2008)