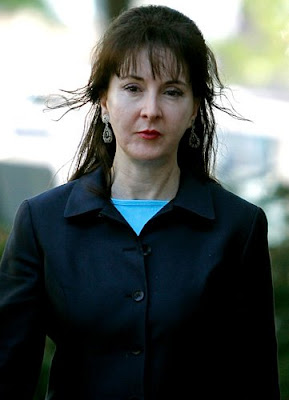 "Several military personnel have worked as independent contractors for a California woman who federal prosecutors say ran a prostitution ring in the Washington, D.C., area for more than 13 years, according to the woman’s lawyer. A Naval Academy instructor was among those working for the 'D.C. madam,' Montgomery Blair Sibley said. ... Sibley confirmed Wednesday that at least one Naval Academy instructor has worked for the firm ... "

••••••
" ... She said she would reveal the identities of more of her clients as well — many believed to be high-profile political and business figures. ... On web sites as prestigious as the Washington Post, conspiracy theorists are suggesting a sinister connection. ... "

"It was her, and she's deceased," Frank Ruggiero, a public information officer with the Tarpon Springs Police Department, told Fox News.com. "There's no question that it was a suicide."

On April 15, a D.C. jury found Palfrey guilty on charges of racketeering and money laundering related to her operating a prostitution ring.

The political problem for Vitter, who had been identified by investigators for Hustler magazine as a client of Palfrey’s, was that the DC Madam threatened in the during and after her trial to come forward with more information. She said she would reveal the identities of more of her clients as well — many believed to be high-profile political and business figures.

Ruggiero told Fox that police arrived at the scene at 10:52 a.m. Thursday and Palfrey was pronounced dead a short while later. He declined to say how she killed herself or offer other details.

The former Madam was reportedly staying at the mobile home of her mother Blanche, police said in a small storage shed located on the west side of the mobile home. "Handwritten notes were found on scene that describe the victim's intention to take her life, and foul play does not appear to be involved," said Capt. Jeffrey P. Young in a press release.

Pinellas County Medical Examiners will determine the official cause of death, and are working with the FBI on the case.

Republican insiders reportedly have been urging Secretary of State Jay Dardenne to challenge Vitter for the Republican nomination in the 2010 elections. In recent weeks though, Dardenne, who had been initially interested in such a race, had been backtracking—viewing polls that put Vitter’s approval rating about 70% despite Palfrey scandal and reports by stretching over the last decade that Vitter’s trysts with prostitutes was not a one time occurrence. (In 2002, a story by the author in The Louisiana Weekly revealed that Vitter conducted a nine month tryst with prostitute Wendy Cortez twice weekly at an apartment on the corner of Dumaine and Dauphine Streets in New Orleans’ French Quarter.)

Now, the resurrection of the scandal thanks to Palfrey’s death and the inevitable questions that it entails could bring the voices calling for Dardenne to seek the GOP nomination back to the surface.

Third District Congressman Charlie Melancon has been flirting with the idea of a challenge to Vitter since last summer. If a moderate Democrat from Acadiana, like Melancon, should mount a campaign against Vitter, the question remains--now that one of the protagonists in the story has turned up dead--will two years be enough for the prostitute scandal to finally blow over for the incumbent Louisiana Senator? Will Dardenne and the state GOP leadership take the risk?

Bayoubuzz Note: Neither Bayoubuzz nor Christopher Tidmore is suggesting that David Vitter had anything to do with the likely death of Ms. Palfrey and are specifically advocating against any such suggestions of a relationship of such kind. However, on web sites as prestigious as the Washington Post, conspiracy theorists are suggesting a sinister connection. While Bayoubuzz believes in free speech, both Christopher Tidmore and Bayoubuzz caution readers to heavily scrutinize any “Vince Foster”-type theories related to Ms. Palfrey’s apparent death. Yet, because of the linkage between David Vitter and the DC Madam, both Christopher Tidmore and Bayoubuzz believe this recent unfortunate incident resurrects the David Vitter “sin” issue and could cause problems for him politically despite his favorable ratings.