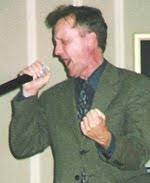 Robert Stacy McCain, a former member of the neo-Confederate hate group League of the South, before his ascent to "legitimacy" at American Spectator:

"[T]he media now force interracial images into the public mind and a number of perfectly rational people react to these images with an altogether natural revulsion. The white person who does not mind transacting business with a black bank clerk may yet be averse to accepting the clerk as his sister-in-law, and THIS IS NOT RACISM, no matter what Madison Avenue, Hollywood and Washington tell us. ..."
http://holocaustcontroversies.blogspot.com/2009/10/meet-robert-stacy-mccain-neo.html

... Earlier this month, Donkey Cons co-author and American Spectator contributor Robert Stacy McCain posted a single-panel comic strip composed by a fellow conservative blogger named Steve Elmore; the cartoon takes an attempted jab at Little Green Footballs founder Charles Johnson for the fellow’s allegedly psychotic efforts to expose McCain as a white supremacist. Johnson is depicted as crying and wearing a soiled diaper. Meanwhile, his allies-turned-detractors among the conservative punditry are shown as being disgusted by Johnson’s terrible behavior; one notes that Johnson "just needs his diaper changed," while another asks, "Doesn’t that big baby ever shut up?" This was deemed to be endlessly hilarious by several of the conservative blogosphere’s more prominent commentators, a couple of whom posted it on their own blogs.

Last week I downloaded a copy of the cartoon, re-wrote the text with references to evidence of McCain’s obvious racist activies, and sent copies to Johnson, McCain, and Elmore. McCain responded with a long, silly "open letter" to me in which he draws on some five or six over-the-top metaphors to illustrate how I’ve been persecuting him, Johnson chuckled a bit, and Elmore sent me a series of whiny e-mails to the effect that I’d "vandalized" his "art."

Meanwhile, his co-blogger announced that I would soon face a massive "backlash" that would end my career as a "journalist" (she seems to think I’m a journalist); what this turned out to mean was that Elmore had just published our e-mail exchange on his blog. So I wrote a big long article making fun of both of them and a few other people that I hadn’t made fun of in a while for good measure, while also linking to the published e-mail exchange and posting another, even more hilarious correspondence I’d just had with the co-blogger. I also published my parody of Elmore’s original cartoon, prompting the artist to demand that I take it down. I told him to talk to my lawyer if he thought he had a case — which, of course, he doesn’t. Instead, he sent a whiny e-mail to my editor demanding that he take it down; of course, the cartoon remains up. In conclusion, the conservative movement is fucked beyond belief and Robert Stacy McCain is a white supremacist with extensive ties to a variety of neo-Nazi and pro-Confederacy organizations and leaders. ...

My Response to Robert Stacy McCain Regarding His Racism and General Anti-Enlightenment Nonsense
By Barrett Brown
Oct. 20 2009

Robert Stacy McCain has written a lengthy and generally civil epistle with regards to my various attacks on him, and I promised that I would address each of his concerns today. So, here’s his message, interspersed with my reply.

A rare occasion, Mr. Brown, when any of those who’ve chosen to attack me even bother attempting to contact me. Of course, no one ever contacts me in advance: “Hey, did you actually write X, Y, Z? If so, why? What did you mean? What are your opinions about these things?” Instead, they leap to assumptions (if it’s on the Internet, it must be true) and the fact that certain things have been endlessly repeated online leads to the assumption that these things are true.

The fact of the matter is that you did indeed write X, Y, and Z, and in fact you do not even dispute writing X, Y, and Z, and X, Y, and Z happen to consist of such things as you writing bizarre apologies for the institution of slavery, jokingly proposing bumper stickers with messages such as, “Have you whipped your slave today?”, and claiming that viewing mixed race marriages with “revulsion” is a natural thing. The rest of the alphabet continues in a similar vein.

How often, since Charles Johnson began attacking me, have I emphasized that, during the years I was at the Washington Times, I was not permitted to address these allegations? And how often have I remarked that “white supremacy” is quite contrary to my observed conduct among those who actually know me?

I don’t know. Twice? More than twice? That is between you and The Washington Times. Insomuch as that publication is owned by the self-proclaimed king of the universe, I can understand why you followed their orders on this. “Pick your battles,” my dad always said.

You are, I gather, a young man, and quite arrogant.

This is true, unfortunately.

Not an unusual combination, really, but neither should you mistake your own arrogance for knowledge. Try Googling my name in combination with the phrase “Hayekian insight.” There are in the near-infinite number of things you don’t know certain facts that may, I suspect, be far more important than those tacts you know. And it may be that you are mistaken about some things you accept as facts.

Well, I’ve had more time to study all this sort of thing than you could imagine. You desire to make me look like a villain, for whatever selfish motive, and therefore assemble a prosecutor’s case — the Ransom Note Method. This you present with a lot of noise and clamour: “A-ha! I have exposed the dangerous villain, whose stealthy evil had never been fully known until now!”

And then I twirled one end of my handlebar mustache in satisfaction and took a pinch of snuff, the single vice I allow myself.

Now, what is *expected* of me in response is that I will address your “evidence” point-by-point or, failing that, that I will Deny, Denounce and Repudiate: “Oh, I’m not actually friends with Person A, and I abhor the thought of being associated with Person B.”

I don’t expect you to do anything of the sort.

Ah, but there is never an end to it, you see? Were I to answer charges A, B, C, you would then proceed to interrogate me about D, E, F, etc. To address your accusations in such a manner would ultimately avail me nothing, while tacitly acknowledging your authority to act the part of the interrogator. Further, such a response would ssuggest that there is some legitimate cause to suspect my good faith, to cause others to believe that perhaps I harbor a hidden hatred which must be rooted out and renounced.

Now see here, Raskolnikov, a student or formerly a student – all I’m doing is pointing out things that you have done. I haven’t summoned you to my crazy Eastern European interrogation chamber in order to demand answers without telling you with what you are being charged. I’m just writing things about you – you know, that thing you yourself have been doing for years in opposition to your own enemies.

You invite me to a Maoist re-education camp, with yourself playing the role of commissar.

Why does it have to be a Maoist re-education camp? Maybe I’m inviting you to a party.

The cloud of suspicion is thrown upoin me, and I must prove myself innocent!

Except that I don’t. We live in a free society and I am not even a candidate for public office. I am not paid for having the correct opinion about anything. Opinions might be profitable to Bill Kristol or George Will, but I am not one of those big-shot pundits. It is my skill and hard work, and not my opinions, which are my stock in trade.

That’s all very well and good. So why not simply admit that you’re a white supremacist and then reinvent yourself as a white supremacist pundit? You have every right to express whatever views you may on anything you like. Likewise, I have the right to point out that you clearly hold such views.

What you and Johnson and others apparently wish to do is to cast upon me a stigma, which you may then use as part of a campaign of guilt-by-association smear against various of my friends. You seem to assume that my friends are fools and cowards, and will automatically disassociate themselves from me, lest you then say, “A-ha! So-and-so associates with Robert Stacy McCain, who is a hateful racist!”

What your various political allies do is none of my concern. That’s a matter for the conservative punditry, not for me.

Except that I’m not a hateful racist. And this, sir, is the big point that you seem to have missed entirely.

People know me, and the people who know me know that I have no hate in my heart, and if they felt it necessary to speak up on my behalf, you might be surprised at who would sing my praises. Their silence you mistake for fear, is rather an expression of their contempt for your malicious behavior.

Again, that’s between you and your buddies.

Whatever you say about me, I am certain you will fail to convict me of hate, Barrett. I don’t even hate you.

I don’t hate you, either. I simply think that you have contempt for the Enlightenment principles upon which our republic was founded, and your past writings seem to bear that out. Sergey Romanov in particular has recently unearthed some staggering amount of things you wrote before you were in the public eye, and the general thrust of these writings is very clear – you are an apologist for slavery, an advocate of white control over non-white populations, and a proponent of the theocratic basis of government. You are not an American – you are a Confederate. This merits pointing out insomuch as that you are two degrees from such figures as Sarah Palin by way of the book you wrote with Lynn Vincent, as well as a single degree away from hundreds of conservative pundits, activists, and politicians.

Anyway, welcome to the 21st century.