Inside a Tea Party

"The sign, visible to the lawmakers as they looked into the cameras, carried a plea to 'Stop Obamunism.' A few steps farther was the guy holding a sign announcing
'Obama takes his orders from the Rothchilds' [sic], accusing Obama of being part of a Jewish plot to introduce the antichrist. ... " 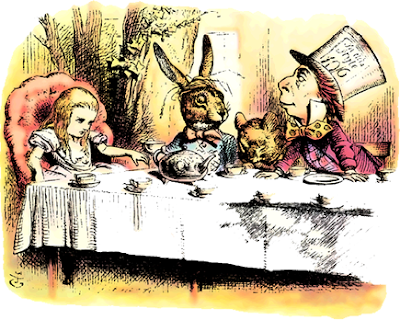 No one said Freedom was Pretty
By Dana Milbank, Washington Post
November 6, 2009
(Submitted by Ralph Hernandez)

The call to arms went out last week. Rep. Michele Bachmann (R-Minn.), who made her name suggesting that Barack Obama and other Democrats have "anti-American" views, appeared on Fox News on Friday night and urged Americans to come to Washington to protest: "We need to pay a house call on Nancy Pelosi and tell her what she can do with the Pelosi health-care plan."

They came as directed, about 5,000 tea-party regulars and antiabortion activists, to the West Lawn of the Capitol on Thursday for what Bachmann called a "Super Bowl of Freedom," sponsored by Republican members of Congress. And what a game it was.

Many of the demonstrators chanted "Weasel Queen," their pet name for the speaker of the House. Others wore masks of Pelosi (D-Calif.) and Senate Majority Leader Harry Reid (D-Nev.); they were covered in fake blood and carrying dolls representing aborted fetuses, as the Grim Reaper led them in chains to hell.

In the front of the protest, a sign showed President Obama in white coat, his face painted to look like the Joker. The sign, visible to the lawmakers as they looked into the cameras, carried a plea to "Stop Obamunism." A few steps farther was the guy holding a sign announcing "Obama takes his orders from the Rothchilds" [sic], accusing Obama of being part of a Jewish plot to introduce the antichrist.

But the best of Bachmann's recruits were a few rows into the crowd, holding aloft a pair of 5-by-8-foot banners proclaiming "National Socialist Healthcare, Dachau, Germany, 1945." Both banners showed close-up photographs of Holocaust victims, many of them children.

"Who knew a casual comment on TV could generate this?" Rep. Jeb Hensarling (Tex.) exulted as he stood in front of the Dachau banner.

Now, objecting to the health-care bill is one thing. But doesn't it send the wrong message for House Republicans to hold an event on the Capitol grounds full of hateful and gruesome words and images?

"I'm not worried about the message of freedom," Hensarling replied, before joining his colleagues on the podium to the beat of the Who's "Won't Get Fooled Again."

Technically, Thursday's GOP-sponsored rally at the Capitol was a "press conference" (a Capitol Police spokeswoman explained that the lawmakers didn't have a permit for a demonstration). The speakers took no questions at this news conference, instead calling, at least a dozen times, for the Pelosi bill's death.

"Remember some of the other battles: Lexington and Concord, Hamburger Hill, Pork Chop Hill?" said Rep. Steve King (R-Iowa). "We're not going to leave this hill until we kill this bill!"

"This bill will be killed," agreed Rep. Bill Cassidy (R-La.).

But, as with a similar rally by Democrats a week before, unpredictable things tend to happen in the wide-open spaces of the Capitol's West Front. Minutes into the rally, a breeze toppled the American flag from the stage.

More ominously, a man standing just beyond the TV cameras apparently suffered a heart attack 20 minutes after event began. Medical personnel from the Capitol physician's office -- an entity that could, quite accurately, be labeled government-run health care -- rushed over, attaching electrodes to his chest and giving him oxygen and an IV drip.

This turned into an unwanted visual for the speakers, as a D.C. ambulance and firetruck, lights flashing, pulled in just behind the lawmakers. A path was made through the media section, and the patient, attended to by about 10 government medical personnel, was being wheeled away on a stretcher just as House Minority Leader John Boehner (R-Ohio) stepped to the microphone. "Join us in defeating Pelosi care!" he exhorted. A few members stole a glance at the stretcher. Boehner may have been distracted as well. He told the crowd he would read from the Constitution, then read the "we hold these truths" bit from the Declaration of Independence.

As you'd expect at a political protest, the messages on signs and buttons were provocative: "Waterboard Congress," "A Commie Is in the House."

But this protest was unusual because it was an official House GOP event, and because some of the remarks on the stage were as outrageous as those in the crowd. The actor Jon Voight, standing with the lawmakers, said of Obama: "Could it be he has had 20 years of subconscious programming by Reverend Wright to damn America?"

Even the Rev. Stephen Broden, at the microphone to deliver the closing prayer, fumed about "death panels inside this death care," adding: "It is tyranny! It is socialism!"

The lawmakers set the tone early, when Rep. Todd Akin (R-Mo.) asked for the Pledge of Allegiance because "it drives the liberals crazy" to hear the "under God" part (his bravado was premature, for he left out the word "indivisible"). The tone continued to the end, when Rep. John Carter (R-Tex.) beckoned to the House office buildings and shouted, "Go get 'em!" Some took him literally: Ten people were arrested at a sit-in at Pelosi's office in the Cannon Building, where they were crumpling up the health-care bill one page at a time.

"You," she said, "are the most beautiful sight any of us freedom fighters have seen for a long time."
Posted by Alex Constantine at 9:54 AM