Checklist: The Lies of Sarah Palin 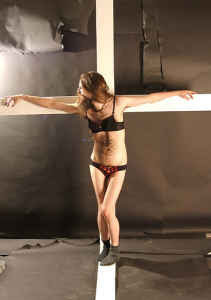 Lying about facts that are readily verifiable is the lipstick trace of a pathological liar - she has the right political party, but even Republicans know that you don't just lie about everything, helter skelter. You do it strategically, saving the lie for the proper moment when it can do the most harm to your political enemies. This woman is obviously in need of tutoring from Karl Rove. GW had the same problem before he sought help from Mr. Rove, and in no time he was able to sell the country on a highly-lucrative war with no justification whatsoever, and all it took was a few well-crafted fibs repeated ad nauseum ("psychic driving") by GOP operatives until all skeptics appeared to be "crazy." Sarah Palin just needs a little coaching from a seasoned Republican politician like Rove or Gingrich or Ailes to hone those lies for potent effect. Don't give up on the porcine maverick quite yet. "Death Panels" was the right idea (the execution failed). Mickey Mouse has undergone a personality makeover - so can Alaska's answer to Gunner Joe.