Another Mega-Confabulating Psyop Artist on the Internet

" ... At the heart of the matter, a U.S. Government UFO Working Group, dark secrets kept in the shadows under the guise of counter-intelligence operations of the United States Air Force, and decades-old rumors of extraterrestrial contact with 'something not of this world.' ... " - Gary Bekkum 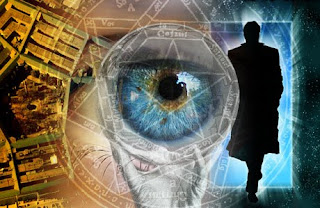 Gary Bekkum is upfront about it in his bio:

"Gary S. Bekkum is an independent 'occasional' rogue journalist & web author and researcher of material that blurs the distinction between fiction and reality."

There it is. No long-winded explanations required. Bekkum doesn't deny it - he's a shaggy-dog pusher, a natural for the Coast-to-Coast radio psyop. "In 2004, Bekkum created Starstream Research as an informal survey of exotic physics and consciousness concepts related to the survival or otherwise of the human race. The Starstream material now appears as the 'Spacetime Threat Assessment Report,' which is targeted to various select defense industry personalities."

Fiction ... or unadulterated kook programming, some might say. I happen to be one of them. More "blurring":

"Rogue journalist Gary S. Bekkum discussed his research on secret government documents, as well as UFO information and psychic premonitions. Project Stargate, the CIA-run program that used remote viewing for 'psychic spying,' ceased in 1995, and 89,000 pages of formerly classified material were then released. Some of the documents revealed predictions of events similar to 9-11, including mention of a 'Project 911' and drawings that resemble bin Laden, he detailed. Last hour guest, paranormal investigator Joshua P. Warren shared several different methods to contact the dead. ... "

Christ. "Psychic predictions of 9/11," occult channelling - fodder for the tabloids.

An alternative stirs to mind: Documented research that isn't fiction and addresses crticial deep political issues without stupid childhood fantasies - "aliens," "remote viewing" - because these distract from the covert crimes of the intelligence "services" and the bourgeois corporate culture they serve. Stare at the goats, not the jackals ... Why "blur the distinction between fiction and reality" at all if the purpose is not dissociation? Spooky Bekkumistic stretchers and War of the Worlds-style "blurring" are a smokescreen that only serve to conceal and dumb down.
Posted by Alex Constantine at 9:20 AM