Give Churches a Choice: Give Up Tax Exempt Status or Give Up Lobbying 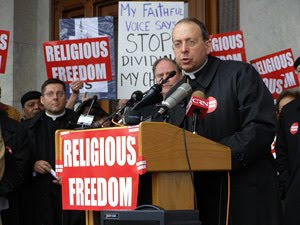 For far too long many religious groups, most recently and most visibly the Catholic Church, have tried to have it both ways. They avail themselves of the constitutional separation of church and state to avoid paying taxes on their secular investments, and then violate the separation of church and state by maintaining a strong lobbying group in Washington to influence legislation.

Recently it became known that the Catholic Conference of Bishops was instrumental in authoring the anti-abortion amendment attachd the to House health care bill, a clear violation of the establishment clause of the First Amendment. And its a perfect example of a religious institution trying to have it both ways. ....

http://www.examiner.com/x-6572-NY-Obama-Administration-Examiner~y2009m11d21-Give-churches-a-choice-give-up-tax-exempt-status-or-give-up-lobbying
Posted by Alex Constantine at 9:05 AM