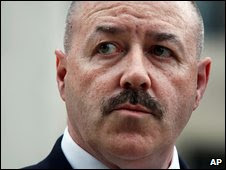 This is a man who loves his country so very much ... he just can't bear to pay taxes like everyone else because, as White Russian "conservative" icon Ayn Rand argues, selfishness is a virtue. As a Republican, he's gotten fat on a steady diet of lies: " ... Mr Kerik had previously denied all charges. ... " Right-wing lies rule! Maybe the Republicans should support this paragon of virtue for president. They have already given us the worst president in American history, and this garbage could even do more damage than Bush. Then "conservatives" can be content, at last, having brought America to its knees where they like it. All he needs is a vapid, lying hockey mom celebrated by a vapid, lying media to complete the ticket, and we're good to go with "conservative" principles (bullying, fear-mongering, lying, killing, torturing, stealing, etc.). - AC

Bernard Kerik lied while being vetted for the post of homeland security chief
Former New York City police chief Bernard Kerik has pleaded guilty to lying to the White House and has also said he will admit tax crimes.

Mr Kerik, who was police commissioner at the time of the 9/11 attacks in 2001, was facing a corruption trial.

He had his bail revoked two weeks ago for passing on secret pre-trial documents and has been in prison since.

He was charged with lying to the White House in 2004 while being considered for a job as homeland security chief.

Mr Kerik made the first of eight expected pleas at a court in White Plains, New York state, on Thursday. The admissions are part of a plea bargain designed to head off three pending trials on 15 federal counts.

He is alleged to have accepted a $250,000 payback in the form of apartment renovations from a company to which he gave a city contract. He is also accused of failing to report more than $500,000 in taxable income between 1999 and 2004.
Posted by Alex Constantine at 9:13 AM