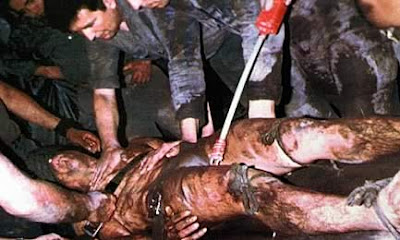 F.B.I. agents who arrived at a secret C.I.A. jail overseas in September 2002 found prisoners “manacled to the ceiling and subjected to blaring music around the clock,” and a C.I.A. official wrote a list of questions for interrogators including “How close is each technique to the ‘rack and screw,’ ” according to hundreds of pages of partly declassified documents released Friday by the Justice Department. ...
http://www.nytimes.com/2009/11/01/us/01justice.html?_r=1

CONTINUED
Posted by Alex Constantine at 11:59 AM