An America that Values Stupidity 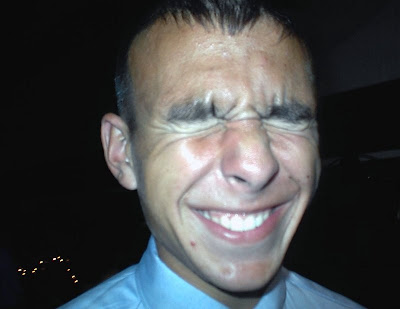 IMHO, stupidity is widely adopted in America as a means of escaping the fearful reality of fascism, and though I'm not a Marxist, there is a perspective here that is consistent with his insights on capitalism. The stressful stimulus of confronting fascist reality is overwhelming for most - and stupidity sets in because this is the alternative to thinking about and taking responsibility for the fascist cesspool that the US has become.

Case in point: Jonah Goldberg's flagrantly dishonest, transparent manipulations in Liberal Fascism have given him a best-seller. Stupid. My own real-world books on fascism are not even reviewed by the press, and are relatively poor sellers because they are considered "threatening" to the average reader, not to mention the establishment. Goldberg's scapegoating fiction is not. An American dolt can breeze through it and feel like a human being. I scare him, call his most sacred beliefs and values into question, so he clings to stupidity, thrashes about for a safe exit (Goldberg) and a scapegoat - liberals, Jews, immigrants, anyone but the truly culpable: himself and his stupidity.

Few visitors to this blog leave comments (if I was a dumbed-down Good German, all would comment, as they do at most blogs, because I'd be "one of the gang"), but American stupidity is a topic that concerns me deeply, because willful ignorance is the greatest obstacle we face in making people understand the crisis, and it perpetuates gross misunderstandings that anti-fascists are constantly battling. The few comments that I do receive are usually stupid and hostile - as if I'd done something wrong by posting this information, which takes some intelligence to process properly, and must be given a good swift kick in the face. It is all my "opinion," after all, and I'm an "alien" existing outside status quo vapidity and group self-love, not trustworthy ... something must be wrong with this "conspiracy" research (fill in the blank), so let's move on, take in a good fart movie instead, wash it down with a Diet Coke.

"How do I look?" is a greater concern to most Americans than the genocidal morass in Iraq or who was actually behind 9/11 ...

" ... now, Jacoby said, something different is happening: anti-intellectualism (the attitude that "too much learning can be a dangerous thing") and anti-rationalism ("the idea that there is no such things as evidence or fact, just opinion") have fused in a particularly insidious way. Not only are citizens ignorant about essential scientific, civic and cultural knowledge, she said, but they also don't think it matters. ... "

NEW YORK: A popular video on YouTube shows Kellie Pickler, the platinum blonde from "American Idol," appearing on the Fox game show "Are You Smarter Than a 5th Grader?" during celebrity week. Selected from a third-grade geography curriculum, the $25,000 question asked: "Budapest is the capital of what European country?"

Pickler threw up both hands and looked at the large blackboard perplexed. "I thought Europe was a country," she said. Playing it safe, she chose to copy the answer offered by one of the genuine fifth graders: Hungary. "Hungry?" she said, eyes widening in disbelief. "That's a country? I've heard of Turkey. But Hungry? I've never heard of it."

Such, uh, lack of global awareness is the kind of thing that drives Susan Jacoby, author of The Age of American Unreason, up a wall. Jacoby is one of a number of writers with new books that bemoan the state of American culture.

Joining the circle of curmudgeons this season is Eric Wilson, whose Against Happiness warns that the "American obsession with happiness" could "well lead to a sudden extinction of the creative impulse, that could result in an extermination as horrible as those foreshadowed by global warming and environmental crisis and nuclear proliferation."

Then there is Lee Siegel's Against the Machine: Being Human in the Age of the Electronic Mob, which inveighs against the Internet for encouraging solipsism, debased discourse and errant commercialization. Siegel, one might remember, was suspended by The New Republic for using a fake online persona in order to trash critics of his blog ("you couldn't tie Siegel's shoelaces") and to praise himself ("brave, brilliant").

Jacoby, whose book came out on Tuesday, doesn't zero in on a particular technology or emotion, but rather on what she feels is a generalized hostility to knowledge. She is well aware that some may tag her a crank. "I expect to get bashed," said Jacoby, 62, either as an older person who upbraids the young for plummeting standards and values, or as a secularist whose defense of scientific rationalism is a way to disparage religion.

Jacoby, however, is quick to point out that her indictment is not limited by age or ideology. Yes, she knows that eggheads, nerds, bookworms, longhairs, pointy heads, highbrows and know-it-alls have been mocked and dismissed throughout American history. And liberal and conservative writers, from Richard Hofstadter to Allan Bloom, have regularly analyzed the phenomenon and offered advice.

T. J. Jackson Lears, a cultural historian who edits the quarterly review Raritan, said, "The tendency to this sort of lamentation is perennial in American history," adding that in periods "when political problems seem intractable or somehow frozen, there is a turn toward cultural issues."

But now, Jacoby said, something different is happening: anti-intellectualism (the attitude that "too much learning can be a dangerous thing") and anti-rationalism ("the idea that there is no such things as evidence or fact, just opinion") have fused in a particularly insidious way.

Not only are citizens ignorant about essential scientific, civic and cultural knowledge, she said, but they also don't think it matters.

She pointed to a 2006 National Geographic poll that found nearly half of 18- to 24-year-olds don't think it is necessary or important to know where countries in the news are located. So more than three years into the Iraq war, only 23 percent of those with some college could locate Iraq, Iran, Saudi Arabia and Israel on a map.

Jacoby, dressed in a bright red turtleneck with lipstick to match, was sitting, appropriately, in that temple of knowledge, the New York Public Library's majestic Beaux Arts building on Fifth Avenue. The author of seven other books, she was a fellow at the library when she first got the idea for this book back in 2001, on 9/11.

Walking home to her Upper East Side apartment, she said, overwhelmed and confused, she stopped at a bar. As she sipped her bloody mary, she quietly listened to two men, neatly dressed in suits. For a second she thought they were going to compare that day's horrifying attack to the Japanese bombing in 1941 that blew America into World War II:

"This is just like Pearl Harbor," one of the men said.

The other asked, "What is Pearl Harbor?"

"That was when the Vietnamese dropped bombs in a harbor, and it started the Vietnam War," the first man replied.

At that moment, Jacoby said, "I decided to write this book."

Jacoby doesn't expect to revolutionize the nation's educational system or cause millions of Americans to switch off "American Idol" and pick up Schopenhauer. But she would like to start a conversation about why the United States seems particularly vulnerable to such a virulent strain of anti-intellectualism. After all, "the empire of infotainment doesn't stop at the American border," she said, yet students in many other countries consistently outperform American students in science, math and reading on comparative tests.

In part, she lays the blame on a failing educational system. "Although people are going to school more and more years, there's no evidence that they know more," she said.

Jacoby also blames religious fundamentalism's antipathy toward science, as she grieves over surveys that show that nearly two-thirds of Americans want creationism to be taught along with evolution.

Jacoby doesn't leave liberals out of her analysis, mentioning the New Left's attacks on universities in the 1960s, the decision to consign African-American and women's studies to an "academic ghetto" instead of integrating them into the core curriculum, ponderous musings on rock music and pop culture courses on everything from sitcoms to fat that trivialize college-level learning.

Avoiding the liberal or conservative label in this particular argument, she prefers to call herself a "cultural conservationist."

For all her scholarly interests, though, Jacoby said she recognized just how hard it is to tune out the 24/7 entertainment culture. A few years ago she participated in the annual campaign to turn off the television for a week. "I was stunned at how difficult it was for me," she said.

The surprise at her own dependency on electronic and visual media made her realize just how pervasive the culture of distraction is and how susceptible everyone is — even curmudgeons.

Interestingly enough I have just finished Lukacs book "The Destruction of Reason." He wrote this in 1953.
He studied the rise of irrationality in Germany from his orthodox Marxist ideology. I thought it was quite interesting that he did not analyze his own pre-suppositions regarding the Stalinist state. In any case, I have learned a lot from you and I recall listening to Mae on KZAP radio in Sacramento in the late 60's.
At the time I was a child and thought her to be way out on the fringe. Naturally enough by the time I finished college I decided she was absolutely correct.

This condition of NOT-SEE-ISM is exacerbated by everybody's HR Department, Hospital, and School System. Only they call dumbing-down, "confidentiality."

Anti-Rationalism is king because Nobody is responsible for outcomes -- only intermediate results, "the process."

Win or lose, succeed or fail, thrive or die, it's all the same to bureaucracies that have taken over from Christian doctrines and replaced those with Rules For Reckoning.

Nobody knows what the laws are because there are too many of them -- 2 million Federal laws, plus state, county, municipality and condominium.

So, everybody is too timid, too scared to speak up, and exhausted by the exercise of trivial and banal choices.

It's definitely fear of the true roots of our culture--which I concur would be the fascist activities you write about--that keeps people willfully ignorant.

People's don't want to question. They're very much in a Pleasantville kind of mindset of "don't worry be happy."

I find when you bring up ideas like sovereignty, people are reticent to discuss that idea. They retreat to the same polarizing ideas of liberal vs. conservative, religious vs. atheist. Start suggesting that there's a bigger picture and I think it frightens people to consider it.

Haven't heard from you in a while.