A Letter to Kate Coe: "How You Got the Theresa Duncan Story - Wrong" 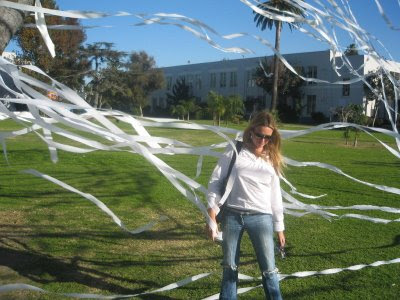 A Letter to Kate Coe
[Reposted]
By Raymond Doherty
http://dohray.typepad.com/t/2007/08/a-letter-to-kat.html

It is unfortunate you turn Theresa Duncan's tragic story into a gossipy tale (LA Weekly, 8/1/07) about her "dark side," painting a distorted picture of the person I knew well.

It is so slanted that I feel compelled to address your account as thoroughly as I can, both for truth's sake, and as part of my own attempt to come to terms with and understand what has happened. By telling an account that is so off the mark, you have, ironically, helped that process.

You establish a few facts - about how Theresa lied about her age and education - and with little else you go on to create an overarching parable about Theresa's flawed psyche and character. You say she created an "elaborate tale" about her life, and then don't tell us what that tale was except for the very thin assertion that she projected an image of being a Hollywood player when she wasn't. Yet the facts you do give in your story describe a remarkably talented person with a prodigious record of accomplishment who for good reason was considered someone to watch.

Nevertheless, you turn all that on it's head to create an unflattering portrayal of a deluded fabulist who would always "paint a picture of dream film projects that were just around the corner..." You rushed to construct a story with a catchy angle sure to get attention, and you did that at the expense of giving the reader some real insight into Theresa and the enveloping folie à deux that was consuming her and her long-term boyfriend and soul mate Jeremy Blake. Worse, you cynically posit that the collision of her “carefully constructed fantasy” with reality was the explanation for her suicide.

In your account you even lead us to believe that through good reporting you exposed the facts about how she said she was 27 when she was in fact 28, and lied about her college education. But much later in the story you inform us that Theresa (ironically one of the most “educated” people I ever knew) had volunteered this information in an e-mail exchange with you last year, saying that she regretted having said she had a B.A. and sometimes shaved a year or two off her age. So the simple truth was not nearly as dramatic (and parable-like) as you set it up to be.

You continue your unrelenting critique: "Four years into her life in L.A., with her Hollywood career flagging, Duncan took a minor stab at journalism..." and "plagiarized the perfume story" that she wrote for Slate Magazine. Yet the editor's note states only that Theresa's piece "used language and sentence structure similar" to the other piece, and involved a single sentence. Reading both, it is clear they are completely different essays, and common sense is all you need to discern that if she used a line from the other piece, that it was not intentional, and not even worthy of criticism. It was unfortunate, but there could be no advantage taken, or benefit given, by her knowingly doing that. In any case, Theresa's writing about perfume stands on it's own, as the poignant sadness expressed on the perfume blogs about her passing shows how well-appreciated it was.

Slate's editor, Julia Turner, failed to use common sense in handling this incident, and now states that Theresa was "upset and confused" by these accusations. Rightly so, considering the nature of the reader comments that criticized Theresa - they were mean, spiteful, and wildly out of proportion to what happened, and had the distinct appearance of being orchestrated (they have since been removed, which is curious, as they were the reason, in her "commitment to our readers," that Turner put up the note). I believe this was one of the key events that contributed to Theresa's deteriorating state of mind and her increasing feeling that she was being silenced, and it made me believe there may be truth to her early claims of harassment (which is a part of this story that still needs to be investigated). All I know for certain is that it profoundly hurt her.

The low point in your reporting is your account of what happened early in Theresa's career at Magnet Interactive (as you say, “long before the career downturns and aborted projects piled up in Los Angeles”), where you recount Theresa's creative partner's version of events without apparently making more than a token gesture toward fact-checking. Having been working at Magnet and dating Theresa at the time, the story you tell, which you refer to as Theresa’s “Shoo-fly Pie meltdown,” is very different from what I remember. What I do remember clearly is our shock when her partner, without Theresa's knowledge, requested a meeting with Magnet's owner and senior creative director where she made the wild accusation that the game Theresa had written was "racist." And I remember thinking how crazy that claim was, for I had read all the drafts of the game treatment. Indeed, Shoo-fly Pie was as sweet and whimsical as all of Theresa's other games would prove to be.

Why Monica did this is something for her to answer (I can only speculate), as she must have known that it would create an untenable work situation and precipitate a painful falling out between them. As for the other assertions made by her, I won't even dignify them with comment except to say they are so gossipy and malicious that they should have given you, as a reporter, pause about your source.

In any case, at its finale, which you did not recount, the story of that day when Theresa was fired is one I’ve always told as the quintessentially great Theresa story, one that captured her vibrancy, spark and amazingly quick wit. And it was, in the literal sense of the term, "esprit d'escalier.”

But back to Theresa as fabulist - you write that "her image as a player in Hollywood... was at odds with the facts." Yet your own description fits with hers, that Theresa had some very promising projects that had been in play but never went into final production. Yes, she would say her movie was slated to start shooting next summer, but she never claimed to me or anyone else I know that these had been given the final go-ahead. Yet she did persist in believing they were going to happen, and she had every reason to believe so. She got extremely close, as Chris Lee reports in the L.A. Times, to seeing these projects realized.

You write that "the reality was not nearly as glamorous as the image." Well, it rarely is in Hollywood. I guess you could say that pretty much for anyone on the cusp of success or failure, including yourself. You rendered this story in a way you found satisfying, with thinly-disguised schadenfreude, and summed it up in the most uncharitable way you could: "Perhaps she got tired of patching the little fissures that threatened to destroy her carefully constructed fantasy. Maybe that is why, at 40, she decided not to go on."

That you would write such a glib characterization of her death is remarkably callous, for when Theresa lay down that last time, she was possessed not by weariness but by an unfathomable state of mind that those who cared about her are still struggling to understand.

The Theresa I knew was very different from the one you portrayed. Yes she had "chutzpah by the gallon," as Salon Magazine described it, and was unrelenting in promoting her projects. But her unbridled, at times manic, energy - bearing such heavy doses of intellect, humor and wit - was serotonin to those of us who knew her well.

Only weeks before she "decided not to go on," Theresa still lit up any room she walked into. Indeed, she truly was something to be reckoned with. As the head of an animation house recalled after I introduced them - "Theresa... She's a force of nature."

And that is why many will dearly miss her, even those, I hope, whose friendship with her and Jeremy had fallen victim to the affliction that overcame them.
•••••••••••
Also see: The Murder of Theresa Duncan
Posted by Alex Constantine at 8:03 PM