Duncan/Blake Update: MediaBistro's Kate Coe Denies that She is an Anti-Semite with CIA Ties

Kate Coe (who wrote the LA Weekly's hit piece on Theresa Duncan and Jeremy Blake), makes light of my allegation that she is a self-avowed anti-Semite with CIA ties:

" ... I’ve written for the Jewish Journal, so they must be unaware of my anti-Semitism."

This is my theory, too. 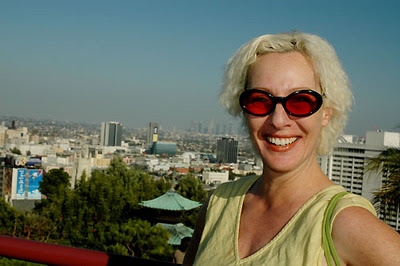 (Wasn't there a well-known stand-up David-Seinfeldian who once let loose with a stream of racist invective in public?) Kate Coe, as noted in a previous post, was a friend of the late FASCIST Cathy Seipp (photo left) at The National Review. (Seipp wrote a column, "From the Left Coast" - unadulterated right-wing crap. Note to children: The Review was founded by the CIA's William F. Buckley and continues to be a fascist propaganda fount in "conservative" drag. That's why your Uncle Bob talks so strangely ... ) For many years, the NR was subsidized by the CIA ... because it never sold all that well ... and it is still a fascist propaganda front with heavy CIA influences.

CIA Mockingbird connections are the rule with Kate Coe (and I'll be detailing more of them soon enough).

And it isn't only Jews who aggravate Ms. Coe - she once publicly excoriated LA media for "political correctness" in not covering black-on-white crime frequently enough - this is a tactic that the Neo-Nazi National Alliance has used against the media for some time - and offered suggestions to reporters to enable them to cover black-on-white hate crimes, sans the (presumed) hesitation of the "liberal" media impulse to report them (?).

Re Kate Coe - who found so many flaws in the late Theresa Duncan's character:

Gabriel, Don't Blind Me With Your Charisma

"Kate Coe says that when her chef husband worked at a restaurant in Santa Monica, food got sent back all the time [because of all the picky Jews]. When he moved to a restaurant in South Pasadena, that almost never happened.

"[Kate writes: 'Oh, Luke, I'm the anti-Semite in my household. My husband thought the sending back was due to the insidious influence of show-biz, not Judism. He'd never say anything mean about anyone--that's why he married me.']"

No one is accusing Ms. Coe of political correctness - respect for racial equality, human rights, etc. - a quality that "conservative" flying monkeys hold in disdain ...