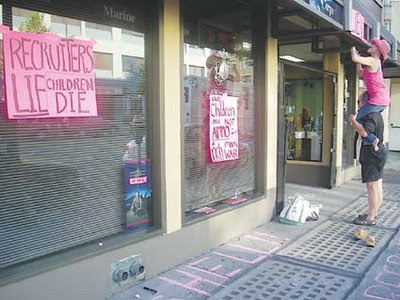 Several Republicans in Congress are moving forward with an effort to strip Berkeley institutions of federal funds in retaliation for last week's City Council vote telling the U.S. Marines their recruiting station is not welcome in the city.

Meanwhile, Berkeley Mayor Tom Bates issued an apology Wednesday to those who serve in the military for any personal offense taken by the council
declaration last week.

Six Republican senators, led by Sen. Jim DeMint, R-S.C., and an Orange County representative on Wednesday introduced companion bills called the Semper Fi Act of 2008 that seek to take away $2.3 million from Berkeley earmarked in the 2008 Omnibus Appropriations bill and give it to the Marine Corps. The funds are designated for school lunches, Bay ferry service, disability organizations, UC Berkeley and public safety.

"Berkeley needs to learn that their actions have consequences," DeMint said in a statement.

"Patriotic American taxpayers won't sit quietly while Berkeley insults our brave Marines and tries to run them out of town. ...