Turtle swims from Indonesia to Oregon 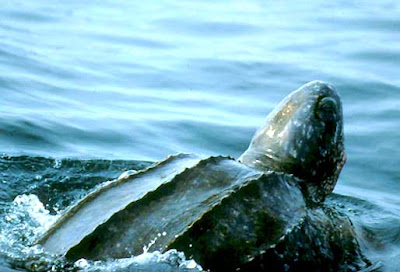 I just think this is an interesting story ... - AC

BANGKOK, Thailand—A leatherback turtle has been tracked swimming from the coast of the Papua province in Indonesia to Oregon, researchers said, in what may be the longest trip for marine vertebrae between breeding and feeding sites.

"This is an animal perfectly suited for doing this kind of journey," said Scott Benson, research fishery biologist for the U.S. National Marine Fisheries Service, who helped track the turtle and presented details of the journey at a sea turtle symposium last month.

The longest distance of nine turtles tagged in 2003, Benson said, was the leatherback that reached Oregon and then headed to Hawaii before the battery on the satellite transmitter gave out. The 12,774-mile journey took 647 days, he said.
Posted by Alex Constantine at 11:15 AM