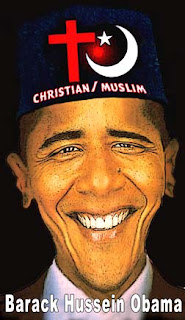 " ... Several conservative media outlets, such as Fox News and Rush Limbaugh’s radio show, repeated the assertions from Insight. The magazine is owned by the same company -- founded by Korean cult leader Sun Myung Moon -- that owns the Washington Times. ... "

WASHINGTON (ABP) -- Churchgoing Congregationalist Barack Obama is being forced once again to explain that he is not secretly a Muslim bent on furthering an international Islamic conspiracy by winning the presidency.

Jewish and other religious leaders have joined him in denouncing an e-mail campaign that has resurfaced in primary states in recent weeks. Various versions of the messages have spread since at least January of 2007, when the conservative online magazine Insight published an article that falsely asserted Obama attended a madrassa, or Islamic religious school, while he lived in Indonesia.

During a debate between Democratic presidential hopefuls Jan. 15 in Las Vegas, the Illinois senator was asked about the whisper-campaign rumors.

The debate moderator, NBC Nightly News host Brian Williams, referred specifically to an e-mail NBC News had received. It said Obama had sworn his congressional oath of office on a Koran and that he refused to recite the Pledge of Allegiance or respect the United States flag.

“Well, look, first of all, let’s make clear what the facts are: I am a Christian. I have been sworn in with a Bible,” Obama said. “I pledge allegiance and lead the Pledge of Allegiance sometimes in the United States Senate when I’m presiding.”

Later, he said that “in the Internet age, there are going to be lies that are spread all over the place.… Fortunately, the American people are, I think, smarter than folks give them credit for. You know, it’s a testimony -- these e-mails were going out in Iowa. They were going out in New Hampshire.

And we did just fine” in those states.

The same day, the leaders of nine of the nation’s largest Jewish organizations released a joint statement denouncing as “hateful” the e-mail rumor campaign.

“Attempts of this sort to mislead and inflame voters should not be part of our political discourse and should be rebuffed by all who believe in our democracy,” the statement said. It was released, apparently, in response to reports that the e-mails were sent to Jewish voters in early primary states.
The statement added, “Jewish voters, like all voters, should support whichever candidate they believe would make the best president.” Its signers included representatives of liberal and conservative nationwide Jewish organizations, including Nathan Diament of the Union of Orthodox Jewish Congregations in America and David Saperstein of the Religious Action Center of Reform Judaism.

A version of the e-mail message in question, reprinted on the myth-debunking website Snopes.com, notes that Obama’s late father was from a Kenyan Muslim family. The elder Obama divorced the senator’s mother, Ann Dunham, when the candidate was a toddler. The younger Obama had little contact with his father from then until his death. Dunham, who is also deceased, was from Kansas and met Obama’s father when they attended the University of Hawaii. Obama was born in that state.

Snopes.com also notes that Obama’s Indonesian stepfather, Lolo Soetoro, was Muslim. Obama and his mother moved to Jakarta after she married Soetoro, and the senator attended elementary school there.

Based on those facts, the e-mail asserted that Obama attended a “radical” school that teaches a Wahhabist interpretation of Islam. Wahhabism is a fundamentalist sect of Sunni Islam with roots in Saudi Arabia. Wealthy Saudi donors have promoted Wahhabist teachings worldwide, but many Islam experts say the teachings promote radicalism and terrorism.

The e-mail also claims that Obama joined Trinity United Church of Christ in Chicago “in an attempt to downplay his Muslim background” and says he took his oath of office, when sworn into the Senate in 2005, on a copy of the Koran rather than the Bible.

However, Obama’s father, while raised in a Muslim home, became agnostic before he met Dunham. His mother, who came from a non-practicing Protestant family in Kansas, was an anthropologist who encouraged the young Obama to attend a variety of religious services and read several religious texts.

Obama has spent significant time on the campaign trail appealing to progressive evangelical Christians. He has described his conversion experience -- he joined the historically black Chicago congregation as a young adult -- in evangelical terms.

In a 2004 Chicago Sun-Times article, Obama spoke about his “personal relationship with Jesus Christ.” His campaign autobiography, The Audacity of Hope, takes its name from the title of a sermon Obama heard at his church.

Only one member of Congress has been sworn into office using a Koran: Rep. Keith Ellison (D-Minn.), who became the first Muslim elected to Congress in 2006.

Obama supporters say the e-mailed rumors likely have their origin in the Insight article, which asserted that the school is a madrassa and that “most of these schools are financed by the Saudi Arabian government, and they teach a Wahhabi doctrine that denies the rights of non-Muslims.”

Several conservative media outlets, such as Fox News and Rush Limbaugh’s radio show, repeated the assertions from Insight. The magazine is owned by the same company -- founded by Korean cult leader Sun Myung Moon -- that owns the Washington Times.

But investigations by CNN and the Associated Press found that the Jakarta school Obama attended for two years is not a madrassa. The SDN Menteng 1 primary school is a co-educational public school that caters to children of wealthy Indonesians, Western expatriates and diplomats. Like other public schools in the majority-Muslim country, it offers religious instruction to Muslim students.

“This is a public school. We don't focus on religion,” Hardi Priyono, the school’s deputy headmaster, told CNN. “In our daily lives, we try to respect religion, but we don't give preferential treatment.”