February 15: Day of Resistance Against Military's Recruitment of Youth to Fight this War

Ever since the Berkeley City Council set off a national debate by taking its stand against the war and recruiters' presence in Berkeley, people here have taken up the responsibility of saying: "NO!" to this illegitimate war, and have kept this demand on the streets and in the headlines.

Friday just after sunrise, leaders from very diverse antiwar groups arrived at the recruiting station - World Can't Wait, Code Pink, A.N.S.W.E.R., Vets for Peace, Pace e Bene, Ecumenical Peace Institute, and a respected educator/activist. They had announced a press conference after which they would stand together, acting in non-violent civil resistance to shut down the recruiting center. However, the recruiters never showed up! 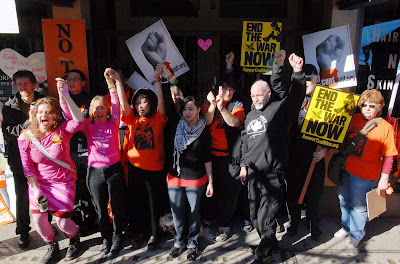 The speakers went ahead with the news conference, surrounded by friends and supporters. Several youth in Guantanamo-type jumpsuits and hoods stood at the station door in silent witness. Many news reporters were there when we declared victory for the day and pledged our determination to continue resistance actions at the recruiting station until it shuts down and this movement spreads throughout the country.

As the day progressed, our numbers (50-100) were bolstered by Berkeley High students, who came out on their day off. At noon, we had a youth "speak out," which went so well, that we spontaneously decided to take a "Wake The Folk Up!" march to the nearby - and still too politically passive - UC Berkeley campus. Youth activists with WCW, A.N.S.W.E.R., and the Bay Area Revolution Club led a contingent of about 40 (mostly BHS students) up to campus and to the famous steps of Sproul Plaza, where in 1964, Mario Savio delivered his legendary address about "putting your body on the gears of the machine" [historic footage] We called on the UCB students to join us, chanting: "UC Berkeley take a stand, stop the war, we demand!" And when we were not getting enough people to join us, one high schooler suggested this: "iPods down, cell phones down, UC Berkeley stand up!" more

NEW YORK CITY: World Can't Wait, Students for a Democratic Society, the Granny Peace Brigade,MDS-SI, the Harlem Revolution Club, and CodePink joined by local residents gathered outside the Army Career Center in East Harlem/"El Barrio". Though it was only 3:00 PM the center was closed with its gate down. The New York Times reported:

"'The question of military recruitment is important because you can't carry out this war without fresh troops,' said Debra Sweet, the director of an organization called World Can't Wait! Drive Out the Bush Regime. 'These troops are being trained to carry out war crimes. We're sending a message that military recruiters are not welcome to prey on youth. The war will be stopped by the action of the people. That is the only way it will be stopped'."

"'What are they recruiting for?' the protesters chanted, replying, "Murder, rape, torture, war!" more

Protesters in Chicago and Seattle found recruiting centers CLOSED when the arrived.

[TY to Victor SR Moore for forwarding this copy to the Blacklist.]
Posted by Alex Constantine at 3:44 PM