Ahead of ruling in appeal, jurist calls spots a 'blatant' attempt to taint jury pool.
Paul Egan
The Detroit News 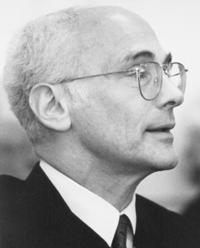 DETROIT -- A federal judge says Southfield attorney Geoffrey Fieger will have to pull a television advertisement he described Monday as a blatant attempt to influence the jury pool for Fieger's pending trial on criminal charges.

Fieger, 56, and his law partner Ven Johnson, 46, were indicted in August on conspiracy and campaign finance charges for allegedly making $127,000 in illegal political donations to the 2004 presidential campaign of Democrat John Edwards by reimbursing employees and others connected with the law firm. Their trial is set for April.

The judge is to rule March 5. But after viewing one of the ads in his courtroom, Borman said it was "blatantly intended to pollute the jury pool," and "clearly out."

The spot, titled "Never Again," features images of President Bush and his top officials. Borman said the ad attempts to draw parallels between the conduct of the Bush administration and that of the Nazis during World War II.

"They came for the Communists," but "I didn't speak," says the ad, which repeats the message with "unionists," "Jews," and other groups substituted for communists. Then, "they came for the lawyers," the ad says.

Michael Dezsi, a lawyer for Fieger, said to gag the ad will violate Fieger's First Amendment rights. A federal raid on Fieger's law offices in 2005 and his later indictment hurt his business and "Mr. Fieger has a right to protect himself," by airing the ads, Dezsi argued.

There was no word on immediate plans by Fieger to pull the ad, absent a formal order from Borman.