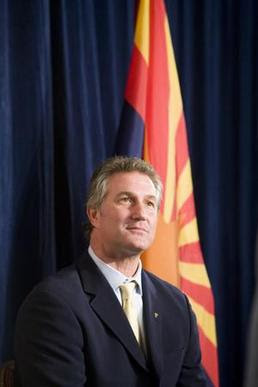 Denver, Colorado - Today's indictment of Congressman Rick Renzi, Co- Chair of John McCain's campaign in Arizona, caps off a week of problems for McCain that have raised serious questions about his credibility on ethics. McCain had announced Renzi as part of his 'Arizona Leadership Team' on January 26th even though the now-indicted Congressman had been under investigation for more than a year for his role in a land deal and legislation to benefit a business partner. [Roll Call, 4/19/07]

Besides the indictment of his Arizona Co-Chair, McCain was rebuked by the FEC this week for trying to drop out of public financing, and told to explain how he obtained a loan to revive his campaign. Additionally, a ballot challenge was filed this week in Indiana, where it appears McCain did not get the signatures needed to get on the ballot, but relied on Republican government officials in the state to get him on anyway. And new reports this week about McCain's proximity to lobbyists, including the many who run his campaign, left unanswered questions about what he may or may not have done for their clients. [Associated Press, 2/21/08; MSNBC, 2/22/08]

"The indictment of McCain's Arizona Co-Chair, the FEC rebuke of his attempt to skirt public financing laws, and McCain's failure to answer questions about his ties to lobbyists raise serious questions about McCain's ethical standards," said Colorado Democratic Party Chair Pat Waak. "The American people have already rejected the Republican Culture of Corruption and deserve clearer answers and straight talk from Senator McCain about the ethical clouds over his campaign."

January 2008: Despite Being Under Investigation, Renzi Makes McCain's 'Arizona Leadership Team' Along With "Influential Lobbyists." Less than one month ago, John McCain's campaign announced its 'Arizona Leadership Team,' which included now indicted Congressman Rick Renzi, who was already under investigation "for his part in [a] land-swap deal." The Business Journal of Phoenix also reported that "McCain's business and political backers in his home state include about 20 influential lobbyists and political consultants who represent industries and other interests. They include former congressman Matt Salmon, John Kaites, Doug Cole, Chuck Coughlin, Stan Barnes, Marcus Dell'Artino, Steve Roman and Michael Preston Green. Bettina Nava as well as Wes and Deb Gullett who have worked for McCain in various capacities as well as held consulting or lobbying posts also are part of the Arizona senator's 2008 effort." [The Business Journal of Phoenix, 2/1/08]

April 2007: Renzi Joined McCain for "Orwellian Publicity Stunt" in Baghdad. After John McCain claimed there were neighborhoods safe enough for him to walk through in Baghdad, Cong. Rick Renzi joined him for a tour of a Baghdad market but sporting bulletproof vests while accompanied by "100 American soldiers, with three Blackhawk helicopters, and two Apache gun ships overhead." [NBC Nightly News, 4/1/2007; Cong. Mike Pence, Press Release, 4/3/07] Headlines soon after the trip called McCain's statements "propaganda" and a "magic- carpet ride." The Statesman Journal in Salem, Oregon, declared: "Brainwashed McCain is a straight-talker no more." An op-ed in the Rocky Mountain News called McCain's staged walk through a Baghdad market "a truly Orwellian publicity stunt." Chastened, McCain issued a half-hearted apology a few days later, saying he 'misspoke' when he pointed to his little walk under the protection of several platoons from the world's most powerful military as evidence of Baghdad's excellent shopping opportunities." [The Washington Post, 4/7/07; Rocky Mountain News, 4/10/07]

June 2006: McCain Issued Fundraising E-mail For Renzi. In June of 2006, "McCain sent out a fundraising e-mail to supporters, asking them [to] help Renzi... urged fellow Republicans to support Renzi's reelection bid." That December Renzi attended a Christmas Party McCain held for his Straight Talk America PAC, the atmosphere of which was described as "uneasy interaction between McCain's media 'base' and his new, Washington Republican donor base." [The Business Journal of Phoenix, 6/27/06; The Hotline, On Call, 12/5/06]

Ballot Challenge Filed After Potential Cover Up. John McCain is in Indiana today where a ballot challenge was filed this week raising questions about whether his campaign collected enough signatures in the Fourth Congressional District to qualify for the ballot, and whether his backers acted improperly to cover up the lack of signatures and put McCain on the ballot anyway. Asked about the controversy this morning, John McCain gave what amounted to a wink and a nod, saying, "I will rely on the governor heavily to make sure that I am on the ballot. And knowing his efficiency, I'm sure that he can do that." [MSNBC, 2/22/08]

FEC Questions McCain's Attempt to Drop Out of Public Financing. The Federal Election Commission sent a letter to John McCain this week saying his decision to turn down federal funding for the rest of the primary season may not be legal, asking for an explanation as to whether he pledged to remain in the federal funding system to secure a $4 million loan to save his campaign. [Associated Press, 2/21/08]

News of Closeness to Lobbyists Raises New Questions. "But when McCain huddled with his closest advisers at his rustic Arizona cabin last weekend to map out his presidential campaign, virtually every one was part of the Washington lobbying culture he has long decried. His campaign manager, Rick Davis, co-founded a lobbying firm whose clients have included Verizon and SBC Telecommunications. His chief political adviser, Charles R. Black Jr., is chairman of one of Washington's lobbying powerhouses, BKSH and Associates, which has represented AT&T, Alcoa, JP Morgan and U.S. Airways. Senior advisers Steve Schmidt and Mark McKinnon work for firms that have lobbied for Land O' Lakes, UST Public Affairs, Dell and Fannie Mae. McCain's relationship with lobbyists became an issue this week after it was reported that his aides asked Vicki Iseman, a telecom lobbyist, to distance herself from his 2000 presidential campaign because it would threaten McCain's reputation for independence." [Washington Post, 2/22/08]

The 27 charges released Friday, shared with two of his business partners, include extortion, wire fraud, and money laundering.

The Associated Press quotes the indictment:

"The lengthy legal document says Renzi refused in 2005 and 2006 to secure congressional approval for land swaps by two unnamed businesses if they did not agree to buy [business associate James] Sandlin’s property as a part of the deal. Renzi had previously owned some of Sandlin’s property, the indictment says.

"In early 2005, one of the businesses seeking surface rights for a copper mining project in Renzi’s district failed to buy Sandlin’s land. As a result, the indictment says, Renzi allegedly told the business, 'No Sandlin property, no bill.'”

Renzi first became a congressman in 2002. He has a friendly habit of calling strangers and friends alike, “brother,” and seems comfortable in many settings. He has also faced scrutiny since then for the way his re-election campaign was financed. Soon after he was e-elected in 2006 over Democrat Ellen Simon he said he would not run for a fourth term.

It was last April when the offices of his family insurance company was raided as part of the investigation.

Fort Huachuca has been a large beneficiary of federal contracts during Renzi’s time as congressman. His father, was formerly in charge at the base which houses high-technology monitoring capabilities and is a translation center for the military. Maj. Gen. Eugene Carmen Renzi later became an executive at ManTech, a defense contractor. His father died Feb. 9 and was buried yesterday.

Renzi has consistently denied there has been any wrongdoing on his part.
••••••
http://www.bloomberg.com/apps/news?pid=20601103&sid=abww0WDvKVMU&refer=us

" ... Congressman Renzi misused his public office by forcing a land sale that would financially benefit himself and a business associate, and in so doing, he betrayed the trust of the citizens of Arizona,'' said U.S. Attorney Diane Humetewa of Phoenix in a statement.

The Justice Department has been cracking down on public corruption, a campaign that has targeted lawmakers. Democratic Representative William Jefferson of Louisiana has pleaded innocent to bribery charges, and, in 2007, ex-Ohio Republican Representative Bob Ney was sentenced to 2½ years in prison after pleading guilty to conspiracy and making false statements in connection with disgraced lobbyist Jack Abramoff.

Renzi's Washington lawyers, Reid Weingarten and Kelly Kramer, issued a statement saying Renzi did "nothing wrong'' and criticizing the Justice Department for bringing its case shortly after his father's death. "We will fight these charges until he is vindicated and his family's name is restored,'' they said. ...

The U.S. alleged that Renzi offered to sponsor legislation to help a company seeking to swap land with the federal government if it purchased property owned by Sandlin. Renzi, who sat on a committee that approved such deals, told the company in early 2005 that he wouldn't support the request if it didn't buy the land, according to the indictment. No deal was made.

That group agreed to buy 480 acres from Sandlin for $4.6 million in April 2005, the government said.

Renzi, according to the indictment, told the investment group it would have a "free pass'' through his panel, the Natural Resources Committee.

While the land negotiations were under way, according to court papers, Sandlin owed Renzi $700,000. Renzi was having financial difficulties as well, the government said.

Renzi also failed to publicly disclose Sandlin's debt and its repayment after the land sale, according to the indictment.

The lawmaker and attorney Beardall were charged with conspiring to steal more than $400,000 from Renzi's insurance business from December 2001 through June 2003. The money was used to fund Renzi's campaign for Congress, according to court papers.

The 35-count indictment, issued in Arizona, includes charges of conspiracy, money laundering, insurance fraud and wire fraud. The arraignment will be on March 6 in U.S. District Court in Tucson, the Justice Department said.

The Renzi investigation was highlighted during a congressional inquiry last year into the Bush administration's firings of nine U.S. attorneys. One of the dismissed prosecutors, Paul Charlton, had been in charge of the probe.

Democrats said the firings may have been carried out to slow public corruption cases against Republicans. Though that was never proved, the scandal drove Attorney General Alberto Gonzales from office in September.

To contact the reporter on this story: Robert Schmidt in Washington at rschmidt5@bloomberg.net
••••••
SHANKER CALLS FOR RENZI TO RESIGN

22/02/2008 19:20:00 Business Wire Howard Shanker, a frontrunner in the Democratic race to fill the seat currently held by Rick Renzi in Arizona Congressional District 1, made the following statement to a group of supporters this morning regarding the latest developments in Renzi's criminal investigation: "Today, the announcement was made that Republican Representative Rick Renzi has been indicted for extortion, wire fraud, money laundering, and other charges.

It is unfortunate that Mr. Renzi has had to go through this protracted criminal investigation culminating to date in his federal indictment.

It is, however, even more unfortunate that the people of Congressional District 1 have had to live in the shadow of Mr. Renzi s asserted dirty dealings for so long.

Mr. Renzi, who previously withdrew from his committee assignments, has not been focused on helping his constituents, our Congressional District, or our country, for almost a year.

It is unfortunate that we can hold so little faith or trust in our elected representatives.

It is time to fix this problem.

It is time for Mr. Renzi to step down, so that his seat can be filled by a public servant who is dedicated to the honest and effective representation of the people of Congressional District 1 and this great nation.

We need to reintroduce the concepts of fiscal restraint, accountability, sustainability, respect, and common sense to a governing body that seems to have lost its way.

I bear no ill will toward Mr. Renzi.

It is, however, time for Mr. Renzi to pass the mantle of leadership and justice to a stronger and more capable arm." To learn more about Howard Shanker and his campaign, go to www.Shanker2008.com.