... Following is a list of some of the Democratic senator's closest advisers on international affairs, all of whom will travel abroad with him.

GREG CRAIG - Craig served in the State Department under President Bill Clinton and later led the legal team defending the president against impeachment. But he became an early supporter of Obama and now advises him on foreign policy. 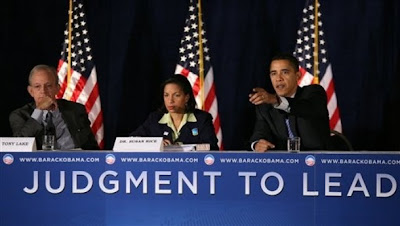 ANTHONY LAKE - Lake was Clinton's national security adviser and before that, advised the Democratic president during his 1992 campaign.

MARK LIPPERT - A former foreign policy aide in the Senate, Lippert returned recently from a tour as a naval reservist in Iraq, where he served as an intelligence officer for the Navy SEALS. He is a staff adviser to Obama.

DENIS MCDONOUGH - McDonough is a staff adviser to Obama and previously served as an aide to former Senate Majority Leader Tom Daschle.

SUSAN RICE - Rice, who was assistant secretary of state for African affairs in the Clinton administration, is one of Obama's most senior advisers.

JAMES STEINBERG - Steinberg was a deputy national security adviser to Clinton and was a sherpa to the Group of Eight meetings in 1998 and 1999.