Cuba-bound Computers from Pastors for Peace Make it After Confiscation 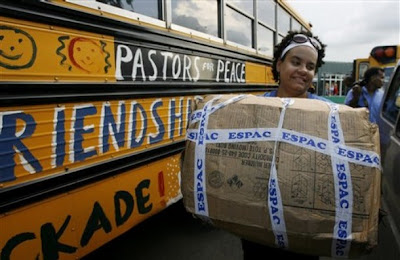 The computers seized by U.S. Customs from the humanitarian aid group Pastors for Peace were returned Monday. Amy Swanoski reports the computers are being transported to Cuba.

On July 3, the U.S. government confiscated 32 computers from Pastors for Peace. They were bound for Cuba. Now, Customs has returned the computers. Communication Director Lucia Bruno says the computers needed to be licensed before they could be transported out of the country.

“Since we refused to ask for or receive a license we have to disregard that, we can’t in good conscience license the goods that we take to Cuba because we feel that it is humanitarian aid to a neighbor that is being harassed and victimized be the US government.”

To get around the license requirement the activists carried the computers to Mexico on foot.

“As soon as we received them we turned around and walked them back over the border into Mexico where they were received by the Mexican part of the caravan. It’s a very good example of how US foreign policy makes no sense”

Duluthian David Moulton was part of this peace mission. Bruno says the computers are on their way to Cuba where they will be delivered to Cuban schools. Pastors for Peace has made 19 trips to Cuba. Bruno calls this year’s mission a victory.