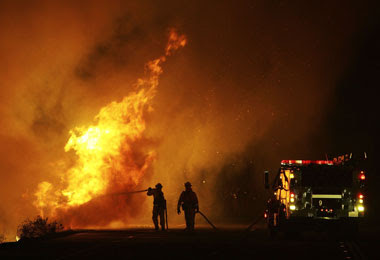 " ... Investigators have identified four separate starts, leading authorities to determine the cause as arson, she said. ... "

A firefighter is hurt in the blaze, which threatened homes in Riverside County.

Arson is suspected in a 30-acre fire that raged this morning north of Interstate 10 in Banning, leaving one firefighter with minor injuries, officials said. The fire was reported about 1 a.m. in a canyon west of the San Gorgonio Memorial Cemetery, said California Department of Forestry-Riverside County spokeswoman Jody Hagemann.

Investigators have identified four separate starts, leading authorities to determine the cause as arson, she said. ...

Banning, in the San Gorgonio Pass in Riverside County, is about 85 miles east of Los Angeles and 25 miles west of Palm Springs.

A wildfire broke out in various places this morning around 1:00 a.m. in Banning, 85 miles east of Los Angeles. Last reports state that it has grown to at 75 acres with 130 firefighters responding to battle the blaze. ...

MAP OF BANNING AND SURROUNDING AREA