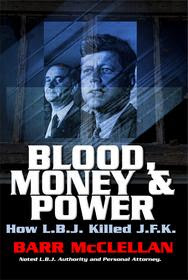 Is this book for real? Author Barr McClellan (Scott's papa) maintains that Mac Wallace, a hit man on Lyndon Johnon's payroll, killed John Kennedy. I find this ridiculous, but judge for yourselves (as this post spins dervishly ... ).

Walt Brown: Author Barr McClellan's partner. Brown has since stated that McClellan's cable documentary The Guilty Men, naming Mac Wallace as a JFK killer, is largely "fiction." McClellan himself calls it "faction." Most of this is boosted from http://davesjfk.com/guilty.html.

Brown is well-known for his search for Noah's Ark.

Author of In the Beginning: Compelling Evidence for Creation and the Flood, by Dr. Walt Brown
http://209.85.141.104/search?q=cache:zuxWhhzSvZMJ:www.biblecodesecrets.com/documents/GrizzlyAdamsDocumentaryExaminesNoahsArk-GlobalWarmingConnection.pdf+researcher+and+author+Walt+Brown+and+noah%27s+ark&hl=en&ct=clnk&cd=5≷=us

Since November 1, 2003 Dr. Brown has been attempting to distance himself from his involvement in Barr McClellan's book.

"I would not have so eagerly endorsed this work had I known what the publisher's edition would look like."

"I have no reason to think that his (McClellan's) work is in any way an attempt at deceit, but at the same time, I have no answers to the 'why?' of how it went from a solid, stand-on-its-own-legs work in July to an almost fictionalized account in October."

I for one find it hard to believe that Dr. Brown, who points out he once served as a Special Agent with the Justice Department in New York and Washington, D.C., never asked what happened to his input and fails to see the "why."
see: http://www.davesjfk.com/waltbrown.html

Dr. Walt Brown, a retired U.S. Air Force colonel, a mechanical engineer from MIT, and the former Chief of Science and Technology Studies at the Air War College, is another scientist featured in Miraculous Messages. According to Dr. Brown, it is inevitable that man contributes to some Global Warming, "but the amount is probably not large and no one really knows the extent."

Barr McClellan - McClellan is touted in The Guilty Men as "an attorney for Lyndon Johnson." No proof of this relationship is ever produced.

In his book McClellan opines that his former boss at the law firm, Ed Clark (1906-1992), is not only the person responsible for McClellan's past legal problems but the architect of the Kennedy assassination. McClellan claims Clark was one of the individuals culpable in the hiring of Oswald's alleged co-assassin, Malcolm Wallace. Wallace died in a single car accident in Pittsburgh, Texas on January 7, 1971 at age 50.

By his own admission, he is a lawyer who around October of 1982 was found guilty of forging a $35,000 deed of trust, was given probation, and was ordered to reimburse the $35,000 to the Travis Bank. He acknowledges that as a result of these events he was forced to cease the practice of law. (p. 292)

His animosity toward Clark carries over from his book to The Guilty Men. During McClellan's on camera appearance he explains that Clark:

"was the secret boss of Texas. He could and did arrange for people to be killed, he arranged for money to be laundered, he had that control."

"And when I heard that - there was no question but that Clark had been behind the assassination and he had done it for Johnson. I know beyond a reasonable doubt that Johnson murdered Kennedy. He acted through Clark he saw that it was done and he did it out of a corruption of power that is unequaled in our history"
http://davesjfk.com/guilty.html

Then there is Glen Sample who with Mark Collom authored The Men on the Sixth Floor, (Garden Grove, CA: Sample Graphics, 1995). He has vociferously disputed McClellan, Brown and Darby's fingerprint evidence that supposedly places Malcolm Wallace on the sixth floor with Oswald.

The Men on the Sixth Floor's web site
(http://home.earthlink.net/~sixthfloor/) press release of May 27, 1998 concluded:

"The challenge is hereby issued to Walt Brown, Jay Harrison, Barr McClellen and the entire Texas research group who claim to have made a forensic match between Wallace and the sixth floor fingerprints. Provide for us proof that will stand up to the harshest scrutiny of the critics. We will be waiting - hoping, for a change, that we are wrong."

Since his performance on the History Channel he has removed from his web site all references to past differences and is now working steadfastly on resolving the "issues."

"Even though Mark and I were unsuccessful (through our fingerprint investigators) in finding a match, we still feel that there is a distinct possibility that Darby's work is correct. Having discussed the issues with Mr. Darby, as well as, with Barr McClellan, we are now revisiting the print issue."

In The Guilty Men, Sample fails to spell out that his book implicating Malcolm Wallace as a shooter is based upon the "confession" of a now deceased Chickasaw Indian, Loy Factor. Factor died May 5, 1994 due to complications from diabetes. Sample's co-author Mark Collom discovered Factor in 1971 while both he and Factor were in the hospital isolation ward at the State Prison at McAlester, Oklahoma. Factor was incarcerated for the 1968-strangulation murder of his wife while Collom was serving a 16-month sentence for a drug-related conviction.

Sample and Collom believe just about everything that Factor tells them. So what do the authors have to say concerning Factor's veracity? Factor is a man described in the book as having:

". . . a metal plate in his head as a result of a shrapnel wound, according to a brother. Factor was a veteran of World War II, and in June, 1948, the Veterans Administration said he was incompetent and entitled to receive compensation in the amount of $60 per month, but a guardian must be appointed before the monies would be released." (p. 43)

If Nigel Turner had compelled Sample to tell the whole story for the "documentary", that is that Factor's claims of involvement contradict McClellan's assertions - it might just damage the credibility of The Guilty Men.

Next we have Ed Tatro who I believe must be an expert in document mutation. In The Guilty Men he managed to convert an August 9, 1984 letter from Billie Sol Estes attorney, Douglas Caddy, to Stephen Trott of the U.S. Department of Justice into a "Justice Department document."

So naïve is Mr. Tatro he feels convicted con-man Estes, who was involved in millions of dollars in loans made on nonexistent fertilizer tanks, ". . . is telling the truth and there is every reason to believe he is . . ." Tatro never reveals just why he feels the almost life long plea bargaining Estes would not attempt to deceive.